Travelling on a Pakistani public bus is never boring! 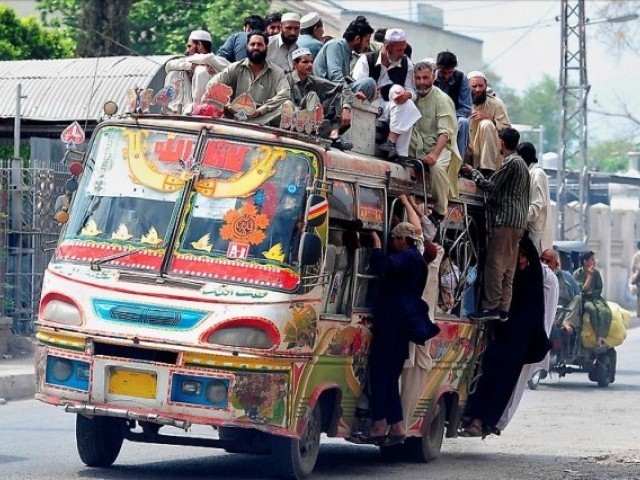 If two buses decide to have a race, and you are on board one of them, get ready to see your life flash before your eyes. PHOTO: AFP/FILE

I am sure many of you have travelled on public buses in Pakistan or know someone who has gone through the ordeal. In case you haven’t, allow me to enlighten you of what the rest of us have to go through.

Here are ten of my experiences while travelling on public transport and the issues many of us have to face on a daily basis.

Drivers of public buses in Pakistan never bother to wait for their passengers at the bus stops so there is hardly any point in waiting there. And it goes without saying that if you are on the bus, the driver will rarely stop on your call, even if you scream at the top of your voice.

Since these buses never really stop, you should be trained on how to board a moving bus, otherwise be ready for that painful, not to mention utterly humiliating, fall.

2. Bus drivers and their ‘Need for Speed’

If two bus drivers decide to have a race and you are on board one of them, then get ready to see your life flash before your eyes – not once but multiple times. I am not exaggerating when I say that on such occasions these drivers transform into ‘Need for Speed’ drivers; they accelerate and break as if their lives depend on winning the race.

Be warned that such rides are not for the faint hearted. Unfortunately, in these ego-driven races, their sharp turns and sudden breaks can become fatal.

3. Bus driver is the king

On the other hand, I used to think that it was Karma – that I was being punished for my wrongdoings – whenever I wanted to reach somewhere on time and had to take the bus because it was only on those instances that the bus driver would decide to drive at a snail’s speed. It took some time but eventually I realised that everyone around me was going through the same thing and I struck Karma off my list.

Don’t ever forget, while aboard a Pakistani public bus, the driver is the king – if he decides that you will travel at virtually zero kilometres per hour, you will travel on that speed… no questions asked. I remember countless such moments when I would pray for the speed of the comic superhero Flash but to no avail.

Funny as it may sound, often bus drivers park their buses at their ‘self-made’ stops and wait till the other bus of the same route catches up to them. While the passengers wait inside a congested, foul-smelling bus, the driver can usually be found roaming outside, smoking or chatting with his conductor buddy until many commuters lose their tempers.

Ever seen a large crowd of people ranting at and beating a bus driver on the road-side while an even bigger crowd of spectators looks on? Well, now you know what’s happening.

After you finally get on board and find a seat (if it’s your lucky day) you decide to kill time by reading a book. As soon as you become completely engrossed and are about to reach the climax of the story, you hear someone asking you something. You look up and see an aunty sitting beside you (usually middle-aged), looking at you intently. You look at her blankly and she repeats the question,

Out of respect, you reply to her question. But she doesn’t stop there and continues,

“Where do you live?”

And this leads to a series of futile exchanges which eventually turn into a one-way conversation where she tells you all about her life while you listen disinterestedly.

Sometimes, I’m almost tempted to pretend that I am hard of hearing, just to get away from these exasperating conversations.

Buses are crowded, especially during rush hours. At such times, you have to squeeze your way into the bus, pushing a few aunties out of the way. You finally find a small space to stand in the overcrowded bus. However, if during your struggle to breathe and stand, you accidentally step on someone’s foot, be prepared for a long and furious glare directed at you. And trust me, it won’t matter that you apologise over and over. Women are not forgiving of anyone who ‘steps on their toes’ – literal or otherwise!

The bus fare increases often and drastically, sometimes even overnight! And if you dare to raise the issue with the bus conductor, you are basically asking for a fight. On some occasions when the conductor has had a good day earlier, he will just smile cheekily at your query and give you the clichéd,

(Madam, the price of petrol has increased.)

Try stepping on a public bus in Pakistan and you will invariably be referred to as khala (aunt), aunty, chacha (uncle) or bhai (brother) – irrespective of your age or gender.

As for me, I already have enough relatives on my plate, thank you very much!

Then there are times when the person sitting next to you on the bus falls into a deep (and I mean really deep) sleep and they conveniently put their entire weight on you. I can’t even explain the ridiculousness of the scene when you have to nudge, shake and push the other person in the hope of waking them up.

I mean, have they forgotten that they are in a public bus and not in the comfort of their homes?

Just when you think,

“Today has been a good day. I got off from work early and the bus isn’t too crowded as well”… yes, you guessed it… the bus driver will bring the bus to a stop and make all the passengers get off because one of the wheels has a puncture in it.

If you are lucky, you’ll be transferred to another bus. However, if you are not fortunate enough (which is more likely), you’ll have to find another bus. And God help you if the bus breaks down in an unknown and shady location.

And oh yes! You never know when the bus you are on has a brake failure – so travel at your own risk!

My intent behind describing the happenings on a Pakistani bus is by no means to deter you from riding on one of our colourful (literally) buses. In fact, I think everyone should undertake this experience at least once in their lifetime, especially if they are fortunate enough to avoid travelling in Pakistani public transport on a regular basis.

It would be the cheapest roller coaster ride you have ever been on and if nothing else, it will give you an insight to how ‘the other half’ lives!