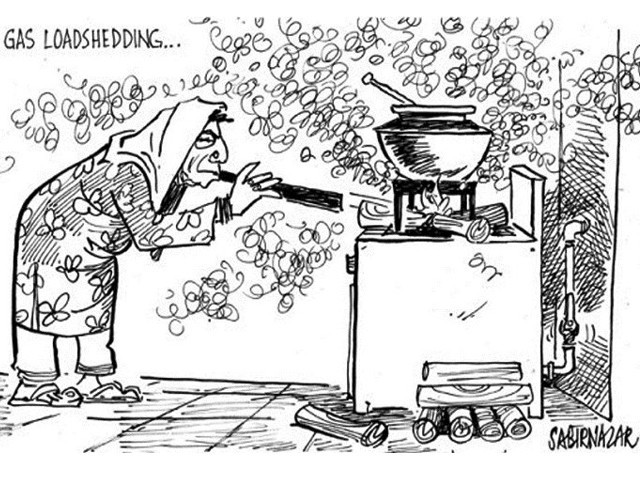 Let’s be clear that Pakistan has not, overnight, run out of gas. The gas is there, but we cannot produce it. PHOTO: SABIR NAZAR

The country is in the grip of a gas crisis. A shortage of natural gas has meant that millions of people do not have gas to cook or hot water to bathe with. There are mile-long queues at compressed natural gas (CNG) stations. Half of Karachi’s buses, which run on CNG, are off the roads, creating chaos in the city’s public transport system. There was even a report that a rickshaw driver set fire to his vehicle in protest, as he’d not been able to feed his family for a week because he could not get CNG to run his rickshaw.

What is going on? What’s behind this sudden and acute shortage of natural gas? Well, as they say, it’s complicated.

The proximate cause is that winter has ramped up demand, while supply has not kept up. But that is not the whole story.

First, let’s be clear that Pakistan has not, overnight, run out of gas. The gas is there. But we cannot produce it. To understand why, we first need to understand some basics of oil and gas production. Oil and gas are hydrocarbons and they occur naturally deep in the ground in what are called fields or reservoirs. There are two basic types of reservoirs. The first type has mainly gas in it, and the Sui and Kandhkot fields are of this type. The other type contains both oil and gas, and examples include the Nashpa and Adhi fields.

In reservoirs which contain both oil and gas, the fluid coming out of the ground is processed in a plant known as a gas oil separation plant. This, as the name suggests, separates the gas from the oil. The gas is delivered by pipeline to the gas distribution companies – Sui Northern Gas Pipelines Limited (SNGPL) and Sui Southern Gas Company (SSGC). The oil is sent to oil refineries by truck or pipelines, where crude oil is converted into furnace oil (a type of fuel), petrol and the likes. Furnace oil is then sent on to power stations to generate electricity.

In this case, the operators of these fields, companies such as the Pakistan Petroleum Limited (PPL) and Oil and Gas Development Company Limited (OGDCL), have been obliged to cut back on oil production. When they cut back on oil, the result is an automatic reduction in gas production because both are produced together, which is why there is a shortage of gas today.

The oil producing companies – PPL and OGDCL – have reduced oil production because the refineries to which they supply oil have cut back on their production, because they are not able to sell their furnace oil to power plants. Why? Because circular debt has left power plants with no money to buy furnace oil, and so the refineries are also operating well below capacity. Some of them have said they may have to shut down if the situation continues.

Thus, to add to the gas crisis, we may soon also have a fuel crisis on our hands.

The import of Liquefied Natural Gas (LNG), while useful and necessary, has ironically contributed to the problem. This is because not much has been done about integrating LNG supplies with the existing national pipeline network, not to mention putting in place the necessary distribution and control system to optimise availability at all points. The absurd consequence of this poor integration is that on some days output from Sui is actually reduced to accommodate imported LNG into the system!

It should be clear from the above that managing the country’s highly interconnected petroleum ecosystem is not a simple job. The prime minister has blamed the gas distribution companies – SNGPL and SSGC – for the gas shortage and ordered an enquiry into their managements. He has clearly been misinformed. The gas distribution companies can only supply the gas they get. If they don’t get it in the first place, they can’t be held responsible for not supplying it.

All the main protagonists of the industry – oil and gas producers (PPL, OGDCL), distribution companies (SNGPL, SSGC), oil refineries, and power stations – are doing what they should be doing, and cannot be reproached for the present crisis. The failure is of planning and regulation. This task falls squarely on the shoulders of the Petroleum Ministry, or the Petroleum Division as it is now called.

And here is where we have the real problem. Unfortunately, the Petroleum Division is run by civil service officers who have zero knowledge or experience in the oil and gas industry. It is unrealistic to expect them to manage such a specialised, highly integrated ecosystem. The present crisis is proof of their abject failure. But in a sense they also cannot be blamed, for they are only doing, or trying to do, the job they’ve been tasked to do. The fault is in the system. It puts singularly unqualified people in positions they are woefully unprepared to occupy.

The challenge for Prime Minister Imran Khan is to understand this basic issue. The solution, surprisingly, is not difficult. What he needs to do is to cut through the red tape and put in the position of secretary (Petroleum) a qualified industry professional who has worked his or her entire life in the oil and gas industry, and has a solid understanding of this highly technical business.

There will be those who whisper in the PM’s ear that he cannot do this. But he can – and he must. The people of Pakistan have elected him so he can think outside the box. He is making a grave error if he allows himself to become hostage to his own bureaucrats.

Finally, it is important to appreciate that the current crisis, ultimately, is a manifestation of decades of neglect in the search for new oil and gas in Pakistan. For much of Pakistan’s history, exploration and production (E&P) companies made little to no effort to search for new resources. PPL, for instance, relied on Sui – its sole asset discovered by the British in 1952 – believing it would last forever. It was only when an overseas Pakistani with international oil and gas experience was recruited as the CEO almost four years ago that the company started to make a serious effort to find new resources; an effort that is only now starting to pay off.

The harsh reality is that our gas fields, such as Sui, Mari and Kandhkot, are reaching the end of their producing lives. The gas crisis we see today will only get worse whenever the system is stressed, making it absolutely critical that activity in the E&P industry is ramped up sharply. This will involve radical improvement in the regulatory regime and culture. It will necessitate enticing back overseas Pakistani E&P professionals who work for some of the largest and most successful oil and gas companies in the world, and giving them the responsibility to revamp the sector.

The need to bring these professionals back cannot be overstated. The lack of activity in the E&P sector over the past decades has meant that we’ve not been able to develop local talent that can understand and address the challenges; talent familiar with the cutting-edge technology needed in today’s world to find new oil and gas resources.

There are more, possibly many more, Suis and Kandhkots out there. Let’s find them. We will be much better off with that than relying on imported, expensive and unreliable LNG that only worsens the crisis we find ourselves in.

Remembering Benazir Bhutto: This is the last chance we have to save our country