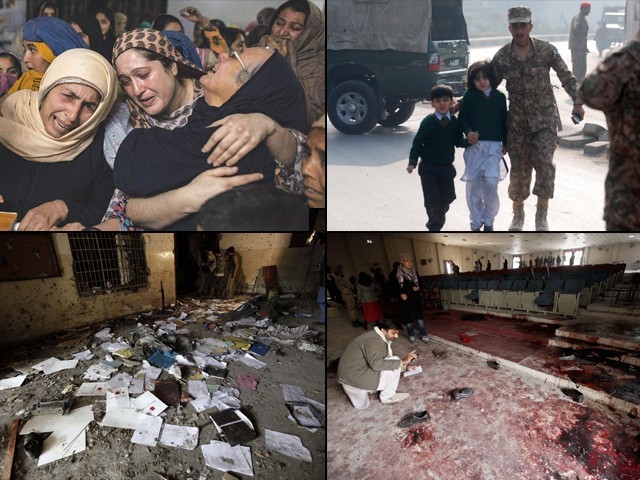 This date wasn’t short of another 9/11. It shook the nation to its core.

One hundred and forty four. On December 16th, we lost a 144 warriors.

I had my Islamiat exam that day. I came back to Godley with a sense of accomplishment. It was over. The tyranny that Ziaul Haq’s fundamentalism had bestowed upon us was over. I distinctly remember talking to a close friend about the late General’s obsessive infatuation with religion, and “how none of us really needed to learn religion through such biased sources”.

And as irony would deem it fit, it wasn’t over. And the way it showed shook me to the core.

On December 16, 2014, progeny of mujahideen – a Chechen, two Afghans and three Arabs – who won us “the great battle against the reds” raided Army Public School (APS) Peshawar to avenge the terrorists killed during Operation Zarb-e-Azb, and martyred 144 Pakistani souls. Despite an intelligence report suggesting that there would be an attack and a quick response from the SSG after the attack took place, we lost 144 of our own people.

I write this figure again and again, perhaps even superfluously, because of the dark day it reflects. Because of the flags that stayed at half-mast for three days, because of the four-footed coffins, the blood that stained a school’s walls, the 132 children who died in pursuit of education, the mothers that were orphaned, the lives… the lives that were torn and stolen.

I admit that this piece isn’t a sole reflection of the facts nor is it objective. Because frankly, I can’t be objective. I am writing about the murder of my class fellows, friends who I’ve seen in other APS branches smiling and crying over fluctuating grades and children who barely even grew to four feet in height. I’m not going to tone it down because it would be unjust; unjust to the 144 fighters who we have no right to forget; unjust to the mothers who lost the light of their lives; unjust to this very nation itself which has no right, whatsoever, to even remotely forget the fourth deadliest school massacre in history.

And honestly, with a slight sense of ephemeral relief, I can attest that we haven’t.

In the aftermath of this massacre, we were united. And we might just still be.

The SSG operation rescued 960 students and teachers, gunning down each of the six terrorists. Despite the terror that still haunts my soul, I cannot forget the brave efforts of the team that averted an even more nightmarish reality.

The very next day, the prime minister approved the paperwork to lift the moratorium on the death penalty on terror-related cases. Another two days later, Mohammed Aqeel, who was involved in the attack on the Army headquarters in Rawalpindi, and Arshad Mehmood, failed assassin of General Pervez Musharraf, were executed. And whilst I’m not a proponent of capital punishment, this deterrent had to be carried out.

The following day, a Pakistan Air Force (PAF) air raid on Mullah Fazlullah nearly resulted in his death, the notorious terrorist surviving barely by a thread till he was eventually wiped out by a series of drone strikes in June 2018.

Soon enough, the landmark Zaman Khan versus The Federation of Pakistan upheld the death sentences of 16 convicted terrorists. All of them were hung to death. Similarly, the 21st amendment allowed the establishment of military courts to speed up the trials of convicted terrorists, ensuring that no delay could potentially hinder the execution of such individuals. For the first time in Pakistan’s history, courts had ruled on the legality of military trials. And as they did, Raheel Sharif himself signed the death warrants of each fundamentalist.

Omar Khorasani – the mastermind behind the attack – was killed in another series of drone strikes carried out to eliminate the infamous tactician. Consequently, the rate of terrorism fatalities across Pakistan fell rapidly by 40% between 2016 and 2017, a number reflecting a peace-wards trajectory for our troubled nation.

Furthermore, in October 2018, the Supreme Court set up a commission to investigate the reason for the attack, suggesting strongly that Pakistan is trying to reflect and learn from its mistakes.

But that isn’t all.

Despite being shaken to the core, Pakistan has managed to stay strong. Our gross domestic product (GDP) has grown from $244 billion to more than a staggering $300 billion within the last four years. Strides have been made by social workers and the government, ensuring and successfully running polio eradication, child protection and welfare support schemes. Pakistan has also managed to keep democracy running, avoiding military rule for the longest time in our history.

This date wasn’t short of another 9/11. It shook the nation to its core. And yet, we’re still out there, living, surviving and fighting.

I’m not proud of where Pakistan is right now. I would be lying if I said I was. I’m still very mad and hurt; I’m still very bitter and disappointed. Our society needs to evolve, our diverse communities need to develop a tolerance for each other. However, despite all of that, we’re still here.

Whilst this isn’t ideal, at the core we are fighting and surviving.

And to end, I can only implore everyone to take a step back and reflect this December 16th. It’s not only about terrorism, it’s about the society we live in, the decisions we make on a daily basis that shape what it means to be Pakistan. All of it, think about it, and think if you’d want this Pakistan for the people who really matter to you.