What Pakistan went through during the Peshawar attack 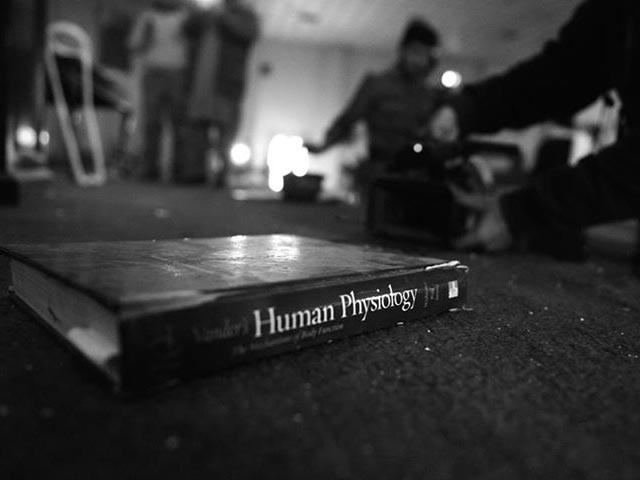 Why is this happening? What kind of barbarians target children? What do those poor innocent souls have to do with anyone’s agenda? PHOTO: MUHAMMAD IQBAL/ EXPRESS

Students of Psychology will be familiar with the Kübler-Ross model. The five stages of loss and grief. ‘Normal grief’. Grief of losing a loved one to a terminal illness. Grief that one has prepared themselves for. Grief that concludes with acceptance. However, there is no theory for the event in which all the first four stages of grief collide. Nothing to explain the kind of grief that does not end with ‘acceptance’.

Yesterday, December 16, 2014, demonstrated to us a new trough in humanity. Just when we thought we had hit rock-bottom in a society where human life has nil value, we were reminded that evil can find a way to burrow underneath rock-bottom as well. Yesterday, my hometown witnessed a group of savages storm a school and proceed to kill 141 people, 132 of which were children. Yesterday, Peshawar wept with tears of blood. The blood of innocent children. The blood of the future of Pakistan.

According to the Kübler-Ross model, normal grief goes through a cycle of denial, anger, bargaining, depression and acceptance. The Peshawar massacre took me through all stages but acceptance.

Denial: No. This cannot be happening. Schools are meant to be safe. I am sure it’s a false alarm. Maybe the children have been evacuated. The army will probably regain control. Surely, no one can be inhumane enough to kill children in school while they sit their exams?

Anger: As reports surface of casualties, a sense of anger overtakes. Why is this happening? What kind of barbarians target children? What do those poor innocent souls have to do with anyone’s agenda? Get those children and teachers out of there! Why isn’t any politician issuing statements naming and shaming the perpetrators? How many children need to be killed for the figure to justify mourning? Why is the death toll climbing so rapidly? I hope these animals pay for robbing us of our future.

Depression: As evening fell and news of the total number of fatalities in this massacre emerged, a deep unsettling depression took over. This should not have happened. No parent should have to face the torture of burying their own children. No parent should have to think twice about the safety of their children while sending them to school. Reports surfaced of the methodical way in which the children were asked their fathers’ profession and then shot if they answered “Army”. I heard about the brutal way in which a teacher was set on fire in front of her students. I learnt of how one boy helped thirty of his classmates to safety and then was martyred. My heart broke when I heard a father state,

“They say we don’t educate our children, but even when I sent him to school, he returned in a coffin. Where’s the fairness in that?”

Acceptance: There is none. The mind cannot fathom how anyone could commit such a heinous act.

There are a myriad of feelings that are being felt right now. One cannot even console the parents that have lost their children because… what do you say?

“I’m sorry for your loss. I understand what you are going through.”

No. Because that would be a lie. To lose a child is devastating. To carry a child in your womb for nine months, painstakingly bring them up till they are teenagers, only to lose them within seconds to an act of hatred, is criminal. No parent should have to go through that.

43 years ago, on this very day, we lost a part of our country. The wounds are still raw for many. Let us hope that December 16, 2014, serves as a turning point in our nation’s discourse. A day upon which we look back and tell our children and grandchildren:

“December 16, 2014 was the day we decided we could not and would not sacrifice any more of our children. The day we stood together in unity against the enemy. The day when we decided we needed to combat the mind-set that propagates such barbaric acts. The day all divisions of faith and ethnicity blurred together to produce Pakistanis. On this day, we proved to the bereaved parents that their children were not martyred in vain.”

Let us please not let the death of our children go in vain.

The writer studied Government and Economics at the London School of Economics and Political Science, and now works as a consultant in London. She occasionally blogs at myoffshoreaccounts.blogspot.co.uk