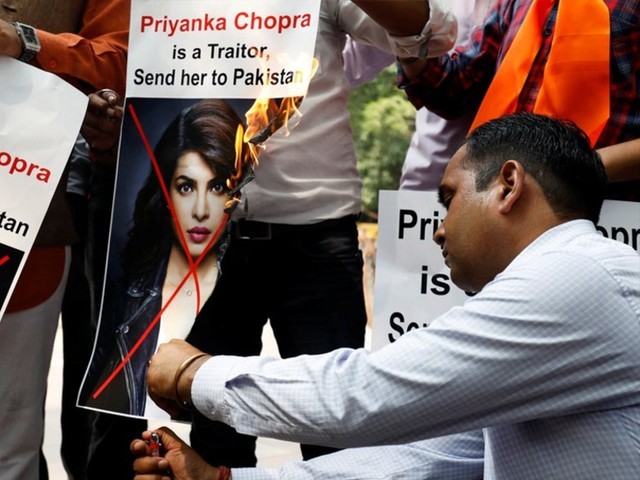 The past week has caused uproar in the international media, after a Hollywood show had the misfortune of treading conflicting political grounds. ABC, an American television studio, later issued an apology to Indian fans after its crime drama Quantico portrayed Hindu nationalists in a negative light, as they planned a terrorist plot and tried to frame Pakistan for it.

The scene from Quantico’s most recent episode, The Blood of Romeo, received prompt backlash from Indians after Priyanka Chopra, who plays the lead character of an FBI agent, holds up sacred Hindu prayer beads as evidence that the plotter, who planned to detonate a nuclear bomb in New York, was an Indian nationalist.

Online trolls had a field day and called Chopra out for ‘betraying’ India and offending Hindu sentiments.

The myth of Hindu terror, by a fake story, enters American television with the help of Priyanka Chopra. Would any Pakistani actress betray Pakistan or Islam the way she betrays India and Hinduism? https://t.co/BbVJuClO0C

1. Fiction doesn’t mean, as a professional, I’ll surrender to any narrative.
2. Many responsible actors would’ve refused to do a scene with such subliminal messaging.
3. In situations like these, character, courage & commitment are tested.
4. You chose, you want to pass or fail. https://t.co/U4cALZNZQU

As a response to the barrage of online outrage, ABC issued a formal apology to its Indian audience:

“The episode has stirred a lot of emotion, much of which is unfairly aimed at Priyanka Chopra, who didn’t create the show, nor does she write or direct it. The show has featured antagonists of many different ethnicities and backgrounds, but in this case, we inadvertently and regrettably stepped into a complex political issue. It was certainly not our intention to offend anyone.”

I’m extremely saddened and sorry that some sentiments have been hurt by a recent episode of Quantico. That was not and would never be my intention. I sincerely apologise. I'm a proud Indian and that will never change.

However, after seeing this acknowledgment and apology issued out of respect for the sentiments of Indians and Hindus, I’d like to ask, where is the apology for us Muslims? Or does the western media not consider itself at fault for its prejudiced portrayal of Muslims?

Hm. Will US TV networks or Hollywood ever apologize for their often reductive depictions of Muslims and Islam? https://t.co/UStck9Rcnf

A remarkable demonstration of India’s soft power. ABC apologizes to fans over #Quantico plot. Never mind the fact that Muslims & often Pakistanis are shown to be crazy nutjobs everywhere. https://t.co/c8k6hzXslJ

How about an Apology for the number of times Muslims have been caricatured as terrorists by Hollywood et al.? Scriptwriters & producers have practically made Islamophobia indispensable to Western pop culture and TV storylines. https://t.co/TVQCtT8s7d

ABC’s apology prompted Fatima Bhutto to suggest that she too is waiting for an apology. In her talk on Hollywood and propaganda, Bhutto specifically asserts how Muslims are treated and portrayed in films and that the media must not misuse its power by smoothing down our resistance to things like torture and war.

It is absurd that the world instantaneously reacted to the ill-representation of Hindus and, upon being pressured into apologising, also issued a heartfelt one. The lack of respect or attention given to the outrage of Muslims with regard to their unrealistic and offensive representation in the media often leads one to wonder whether it is sheer ignorance or a political agenda that fuels offensively biased productions to be aired for the masses to view.

The most pertinent example of course is that of Homeland, whose problematic depictions of Muslims as well as its misinformed portrayal of Pakistan has frequently led to the ire of viewers on social media.

Media, particularly Hollywood, has the immense power to normalise things that are in fact immoral, biased and unrealistic. However, most of the time it just communicates unacceptable messages, ultimately leading to the masses accepting what they watch as fact.

There is no doubt Hollywood too often portrays Islam in a negative light, which has been normalised to the extent that Muslims globally have accepted the stereotypes directly linked to their faith. Perhaps this is where Muslims go wrong – accepting these stereotypes and blatant Islamophobia as the norm, and not voicing out in protest. But when the mainstream media “casually” depicts Muslims as troublemakers and terrorists in the plot, it becomes essential to raise our collective voice.

Sorry to say this but in many Bollywood films Pakistanis are portrayed as terrorists, muslims are shown to be plotting terrorist attacks.

One episode of Quantico showing the opposite, everyone loses their minds.

How times Bollywood must apologize to Muslims? #Quantico #PriyankaChopra pic.twitter.com/ZVxZQTrx3Q

Quantico: one episode about Hindus being terrorists

In a world where Muslims are also soaring to brilliant heights and achieving milestones, they need to be truthfully portrayed by Hollywood. The stale and regressive “Muslim characters” most definitely need an evolution. Hollywood needs to move forward from showing Muslim men purely as thugs, terrorists and taxi drivers, to successful businessmen and politicians as well.

Similarly, where Muslim men are portrayed mostly in a negative light, Muslim women are rarely incorporated into the narrative. If by some miracle they are included in the plot, their characters are either shown as submissive or unintelligent, which is quite the opposite of the realistic image of empowered Muslim women residing in the West.

The media is a powerful medium which can not only influence the masses, but also reform ideologies. However, this constant negative portrayal of Muslims will condition people into believing that if not all, then a majority of people practicing Islam are barbaric, violent and inhumane. Presently, while globalisation is at its peak, the media holds the responsibility of promoting religious and cultural tolerance, rather than giving air to the wildfire of radicalisation and racism.

So a western channel apologises for showing a Hindu terrorist in #Quantico. They’ll happily stick with Muslim terrorists. And remain clueless about the orchestrated murders by Sanghi groups in India. https://t.co/wJxpr7Tx4Q

All this has left Muslims in India and across the world whose identities have been marred, dragged and abused endlessly by Bollywood and Hollywood for decades to ponder haplessly over the seemingly infinite tentacles of anti-Muslim bigotry.https://t.co/b9SwUbdYFK

So #PriyankaChopra 's #Quantico is supposedly in a soup because it portrays "Hindus" as terrorists.

Welcome to the life of an average Muslim!
Almost on a daily basis we're asked to apologize, condemn, explain verses of the Quran with contexts & convince folks we're peaceful. pic.twitter.com/UPKXQcEay1

Muslims around the globe should rightfully demand an apology for being represented negatively throughout western media; however, our primary plea is that media networks and script writers put an end to producing TV shows and films that ignorantly continue to represent Muslims in a regressive manner.