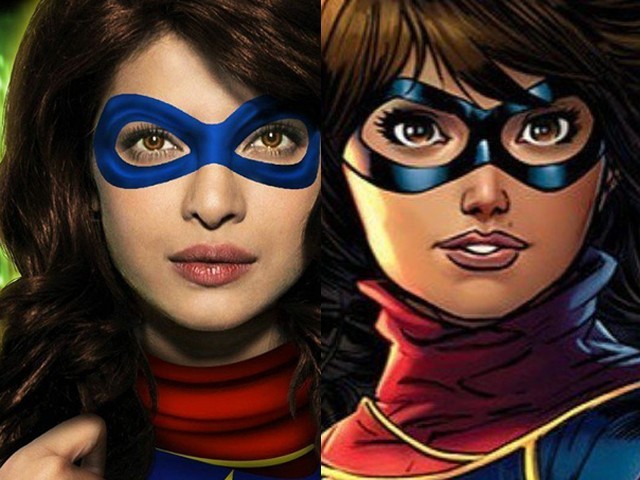 While Chopra definitely has the acting chops to pull off such a job, she does not look the part. PHOTO: SALMAN ARTWORK (L)/MARVEL (R)

Marvel Cinematic Universe (MCU) will be entering phase four of its production post Avengers 4, which releases in 2019. Only two movies, a Spider-man sequel and Guardians of the Galaxy Vol III, had been announced for phase four, but recently, Kevin Fiege, president of Marvel Studios, while talking to BBC said that the studio was planning to introduce Ms Marvel to the MCU as well, and that the plans to do so were in the works.

Ms Marvel aka Kamala Khan is a teenage Pakistani-American superhero. She was first introduced in 2013 as a young girl, who was inspired by Captain Marvel (another female superhero who will get her own movie in 2019 and will play a pivotal role in Avengers 4), and soon realised that she too had powers that included healing and shape-shifting ability. Ms Marvel went on to headline her very own comic book which made Ms Marvel the first ever Muslim superhero comic book character to do so.

When Fiege said there was a Ms Marvel movie in the works, the superhero fanboy and the Pakistani in me were both excited. Getting to watch a superhero of Pakistani origin would not only be an exciting experience, but also culturally important as people will get to watch a positive and heroic portrayal of a Pakistani, which does not happen quite often in foreign cinema these days. This news had made my day, until I started going through some Twitter reactions to this news and saw that some fans wanted Priyanka Chopra to play this pivotal Pakistani-American character.

We love you @priyankachopra 💞 You’re amazing in Quantico and would love to see you play Ms Marvel 💞🖤🙌🏽 https://t.co/bdn3lpSHsr

.@priyankachopra would be the best fit for Ms. Marvel's role. https://t.co/ZfXcW2ELgy

Chopra is no doubt a talented actress and she did a brilliant job in movies like Bajirao Mastani and Mary Kom, but playing a superhero convincingly is not an easy feat to achieve. Superhero castings are done with extreme care as these characters have been portrayed in a certain way in the comics.

Take Robert Downey Jr as an example; he and the character of Tony Stark as shown in the comics share quite the resemblance. Similarly, Chris Pratt and the character of Star Lord from the comics also have similar looks. It is also a fact that these actors are immensely talented and that adds to how believable they are as superheroes. Simply put, if you are playing a superhero, you have got to look the part. Chris Hemsworth put on a ton of muscle mass to portray Thor, Chris Evans did the same to portray Captain America.

While Chopra definitely has the acting chops to pull off such a job, she does not look the part. Firstly, Kamala or Ms Marvel is a teenager, a 15-year-old to be precise. Chopra, on the other hand, is 35-years-old, and although Marvel has used visual wizardry to de-age certain actors in the past, that won’t be an option here as that would require a lot of CGI shots. Also, an actual teenager would have the charisma and the energy to do justice to this character, which Chopra simply cannot.

If we look at all the Spidermans in the past, we can understand this predicament a little better. Tobey Maguire and Andrew Garfield have played Spiderman in the past, and though both are exceptional actors and gave us highly entertaining superhero films, they didn’t look like Spiderman. Like Ms Marvel, Spiderman is also a teenager, but as young as Maguire and Garfield look, they could never pass for the high school kids they were made to play in the movies. This is why Tom Holland’s casting has worked; not only is he great, he actually passes as a high school teenager and makes the performance feel credible.

Priyankas a great actress but there's no logic here. How can Ms Marvel WHO LOOKS UP TO CAPTAIN MARVEL AS AN OLDER IDOL be older than Captain Marvel herself? (Brie is 28, Priyanka is 35) pic.twitter.com/fwqRmOTbOc

Secondly, Chopra, an Indian, playing a critical Pakistani character would be a disaster. A Pakistani teenage actor would be the perfect casting option as that is the character description of Ms Marvel. Not only should Marvel definitely cast a brown actor, it should preferably look at Pakistani-Americans for the role. Moreover, given the constant tension between the two countries, an Indian playing the role of a Pakistani will not sit well with certain segments of the audience.

Furthermore, people have argued about the difference it would make if an Indian was cast instead of a Pakistani, since we have the same features and belong to the same region. While that is true, it is not just about the way a character looks, but also about the true essence and representation of a Pakistani. Pakistan isn’t the most liked nation – we all know that – which is why we have far less representation than India in most things. A Pakistani-American playing the part of Ms Marvel will not only be a proud moment for the whole country, but will finally present a Pakistani in a positive light for a change. After all, we are all tired of Hollywood’s portrayal of Pakistan and Pakistanis (yes, I am looking at you Homeland).

For all the love I have for priyanka chopra being a great actress, if she gets cast as Ms Marvel I will lose my shit. For once Muslims and especially Pakistani Muslims have a chance to be represented, don't take that away. #MsMarvel

if they actually introduce Ms Marvel (Kamala Khan) into the MCU, she deserves to be portrayed by a dark skinned, muslim Pakistani girl under the age of 21 and literally nobody else. pic.twitter.com/O4W3605Fg3

The Marvel head honchos need to understand the significance of this character and realise that this could be the start of something beautiful, but one wrong casting decision would not only ruin the character, it will also leave a stain on Marvel Studios itself. These days, one decision of poor casting can lead to backlash and people boycotting films before they even release. Case in point: Ed Skrein resigning from Hellboy after it was revealed that the character is not actually white but was being whitewashed by Hollywood.

Marvel has always gotten the casting decisions right, so I have faith that the casting directors at Marvel won’t disappoint the character and its fans, especially Pakistani ones! One can only hope that someone of Pakistani origin could play this role.

That would be a dream come true!