Fatima Bhutto and her songs of blood, sword and fairytales 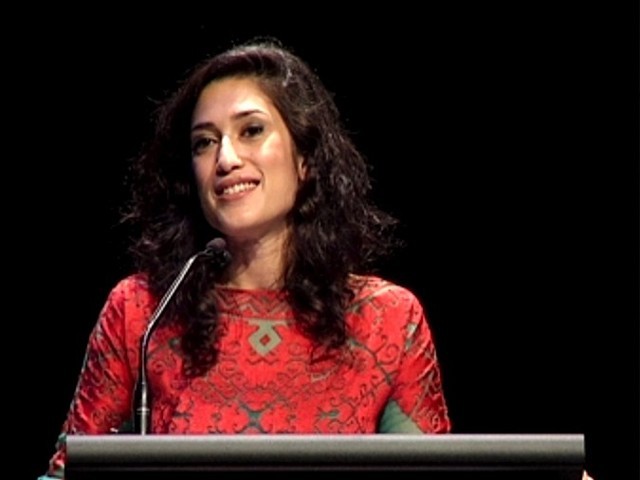 Fatima Bhutto's speech is based on fiction that has lately evolved as the unannounced national dogma.

She was beautiful. She was eloquent. She was vivid, and witty. Yet while orating at the Sydney Writers’ Festival Fatima Bhutto also managed to be  naïve, hollow and juvenile.

Seemingly, the trauma of her beloved father’s death has not left her and this, unfortunately, has become an indistinguishable part of her personality – to discuss her experiences while speculating about national issues.

Her recent speech clearly epitomises the emblem of her book, “Songs of Blood and Sword,” published in April, 2010, that is, selective amnesia and fiction in the absence of fact.

Her speech starts with the popular state propagated narrative of politician bashing and she makes no mistake in picking out her favourite punching bag, President Asif Ali Zardari, whom she terms as “Mr 10%, Mr 50%,  Mr 110%,” where the appellations are associated with the last three terms of the Pakistan Peoples Party (PPP) government.

There was not a single mention of the fact that the man had spent 11 precious years of his life behind bars and not even a single corruption charge was proved, despite the tedious efforts of his foes in the civil as well as military establishment. What follows is the much anticipated NRO claptrap where she, like always, misses out the point that the same ordinance became the basis of the return of two exiled leaders to Pakistan and paved way for the revival of the much needed democracy by doing away with legal implications of decades-long political victimisation. No wonders the indoctrination is the reflection of her memories of her father, given the family differences within the Bhutto clan that she stated in her book here and there. As for an instance she rewrites a poem written to her by her father:

Aside from the political rants, the most unscrupulous account of the speech is associated with national security issues, where she conveniently displays blatant dishonesty by parroting the rhetoric of distant observers, the likes of Tariq Ali and other armchair leftists who seem to have not even an iota of the ground realities.

She handily portrays drones as an evil tool and the only reason of dissemination of militancy and terrorism by effusively pointing out the 52 drone attacks during the months of 2010 when Pakistan was suffering from one of the most calamitous natural disaster of history. What she misses out is that during the same months terrorists killed around 500 innocent citizens in terrorist attacks across the country.

To further predicate her apprehension, she mentions a report “Do Targeted Killings Work?” released by Brookings Institution, a public policy think tank based in Washington DC. The report claims that “for every militant killed, 10 or so civilians also died” without providing any source of information and statistical data – another glaring example of her selective amnesia.

Had she been slightly interested in getting the whole picture instead of relying on the reports that further reinforce her convenient inclination, she could have easily accessed local media reports that show the consent of locals of FATA over the drones. As far as statistics and facts are concerned she could have considered the following reports that provide data regarding militants killed in drone strikes and are certainly not in line with her dishonest hypothesis and fondness of fiction instead of facts:

The Year of the Drone

Then she makes the most fraudulent claim, in which she mixes the disappearance of Baloch activists with the ‘war on terror.’ She states that the misery of the Baloch people is the ultimate consequence of Pakistan’s engagement in the war. This claim would leave anyone, who has even the slightest idea of the situation in Balochistan, stunned. Can she explain how the abductions and extra-judicial killings of Baloch activists is related to Pakistan’s engagement with the war on terror?

How would she vindicate the selective obliteration of Hazara Shias in Quetta who are being massacred by virtue of being associated with a particular sect?

Would she term Professor Saba Dashtyari, Habib Jalib Baloch, Safeer Baloch, Faiz Muhammad Marri, Arif Noor and hundreds of unnamed and unrecognised bullet riddled bodies as American agents who paid the heavy price of their lives in the lanes of truth and freedom? Why was there not even a single intimation of our heroic security agencies and mighty army who have the blood of hundreds of thousands of Bengalis among others on their hands?

There is a fine line between fact and fiction and one falls prey to losing sight of the truth if one hides personal repugnance behind the cloak of fiction, in lieu of the facts.

This is what the speech was all about – fiction that has evolved into national dogma, which is taking its toll by transforming not only those who are susceptible to propaganda, but also the resourceful educated elite, into apologists of militancy and suppression.