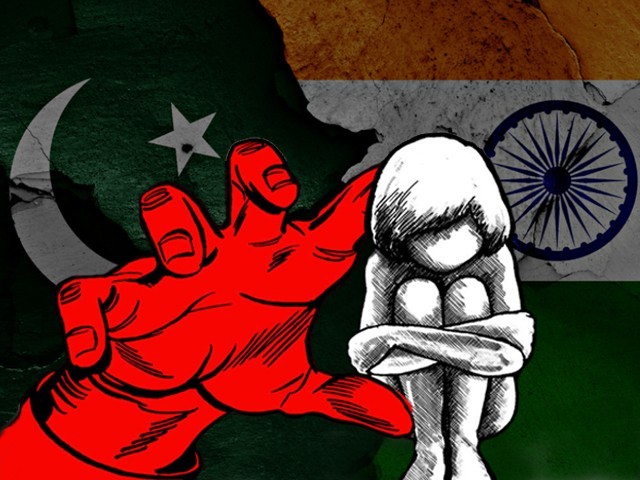 Asifa Bano in Kathua was only eight-years-old. Zainab Ansari in Kasur was only six.

Imagine being a young woman who steps out of her house late at night. You hang around with friends, partake in merrymaking that stretches deep into the night, and then safely return home in the morning. There isn’t an ounce of worry in your mind as you go about this. Being wary of your surroundings never crosses your mind, and looking out for unwanted stares doesn’t either. You feel secure, safe and sound.

If you’re living in modern day India or Pakistan, this scenario would never happen. Divided by politics 70 years ago, they are still united by the cancer of rape and sexual assault.

Is a woman raped every time she steps out of her house in either country? No.

Is a woman more vulnerable every time she steps out of her house in either country? Yes.

The recent outrage over the Kathua rape in India is a new chapter in the never-ending grim tale of rape in the subcontinent. The fact the girl was a minor might make it seem different in a twisted away, but the sad fact is, it isn’t.

Pakistan was home to its own rape of a minor earlier this year in the city of Kasur. Asifa Bano in Kathua was only eight-years-old. Zainab Ansari in Kasur was only six. While Asifa was grazing horses, Zainab was on her way to a Quran recital class. Every other day, there are reports of infants and children violated, often subsequently murdered. Official statistics are extremely unreliable in either country since a large number of rape victims fail to come forward, and even when they do, the matter is dragged under the rug more often than naught.

The Kathua rape in India has an added dimension to it that stretches beyond sexual assault – religion.

The victim was a Muslim girl in Jammu and Kashmir, India’s only Muslim majority state, and was drugged and raped inside a Hindu temple by several men, including its custodian, Sanji Ram. According to the police, Ram had been an aggressive opponent of the settlement of the Muslim Bakharwal tribe in the area, and saw Asifa as an easy target to frighten the group into leaving the area entirely.

The most shocking element of the whole story is how the perpetrators received unprecedented official and public backing, simply because they belong to a particular religion. Protest marches involving lawyers and two ministers from the ruling Bharatiya Janata Party (BJP) marched through the town with the national flag. The Kathua Bar Association demanded a Central Bureau of Investigation (CBI) inquiry, arguing the state government had “failed to understand popular sentiment”.

India’s proud secular history is slowly being discarded and disposed of, as Narendra Modi’s Hindutva edges towards becoming the new norm. The fault lines between the Hindu majority and the Muslim minority in the country are being exposed. If it’s not the consumption of beef, it’s sexual violence.

Over in Pakistan, secularism has never been the order of the day, and is unlikely to become so anytime soon. While the country has not experienced support for rapists in a manner similar to the Kathua case, public attitudes still lean heavily towards denial.

Mukhtaran Bibi’s example from 2002 comes to mind. Gang-raped on the orders of a tribal council, she ended up surviving, unlike many others. Tribal custom dictated she commit suicide after being raped. However, she spoke up and her story was picked up by the local media. Then president, General Pervez Musharraf, remarked that being raped had become a “moneymaking concern”.

In May 2013, the controversial Council of Islamic Ideology (CII), a religious body responsible for giving legal advice on Islamic issues to the government, declared DNA tests are not admissible as evidence in rape cases, and supported a questionable Islamic law requiring women alleging rape to get four male witnesses to testify in court before a case is heard. The CII also spoke up against the Women’s Protection Act, passed by the Punjab Assembly in 2016, declaring it to be in conflict with the Holy Quran.

Sexual violence in the country is not just limited to women; the country’s madrassas or Islamic schools are home to sexual predators too. As recently as November 2017, a teenager and his accomplices at a madrassa in the city of Faisalabad molested and subsequently murdered an eight-year-old boy, by throwing him off the roof of the religious seminary.

While there is outrage over sexual violence in both India and Pakistan, the fact remains that both countries are home to some of the most gruesome tales in the world. Government authorities are either lax, incapable or in many cases, both.

The problem stretches deeper than the government’s inability, and is arguably rooted in the sexually curtailed conservative societies on either side of the border.  The mixing of religion into matters only makes things more explosive. While small pockets of urban centres in either country may be home to a more progressive school of thought, most of the population resides in rural centres that are knee-deep in their patriarchal ways. Here, honour will always take precedence over moral righteousness.

While there may be a lot separating India and Pakistan, what unites both is something both countries have a difficult time accepting. This isn’t what Jinnah and Gandhi hoped for, and if this doesn’t make them turn in their graves, nothing else will.

The rise of Bilawal Bhutto Zardari: Much more than a poster boy of Pakistan’s family-dominated politics