‘Revenge rapes’: Why are Pakistani women constantly paying for the sins of their men? 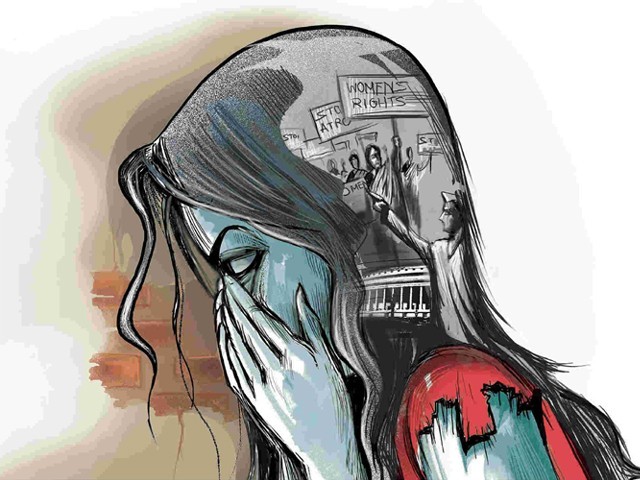 We say we’re trying to change, that we want women to have equal rights, but how long can we continue to make these claims without doing anything about it? PHOTO: PINTEREST

Toba Tek Singh is one part of the country that makes headlines quite often. So often, in fact, that I’ve become inclined to reading its name in print. This time, however, I didn’t skim over the content, as I typically do. This headline, after all, was not like the others.

Ten people were taken into police custody for ordering the rape of a woman as revenge. Yes, that’s right. They gave an explicit order for a woman to be raped; for her ‘dignity’ to be snatched away from her. All for the price of revenge.

We live in a society that thrives off of using women. Need a body? Take my sister, they say. Need someone to blame? Take my wife, they say. Need a scapegoat? Take my mother, they say. They are always taking from women; taking more than we can give. It’s always been like this, yet some days I can no longer stand it. It hurts to think of. It hurts just to read these headlines.

We say we’re trying to change, that we want women to have equal rights, but how long can we continue to make these claims without doing anything about it? The line of morality has by now been crossed so many times, it has seemingly dissolved completely. No one knows where the boundaries lie anymore.

I think of this woman, living in a society where she is bargained off for punishment, one where this act is almost a norm, and one where a woman’s body is simply an asset to be procured – a means to an end – and I’m sick of it. I’m sick of writing the same article about the same mentally disturbed human beings. I’m sick of it, because no one seems to be listening, or changing, or doing anything about it.

Panchayat’s are meant to be the people’s court, but which people are they favouring? Certainly not women; those who need it the most. Are women not people?

On March 20, 2018 Wasim Shehzad raped his neighbour. Do these words make a difference to you? Do they make you feel anything at all? Probably not, because Pakistanis read about this multiple times every day. Not a day goes by without rape making the news. Violence against women, and children keeps on rising. And we keep talking about it, with no change in sight.

Shehzad’s family then asked for forgiveness. In my opinion, rape can never be forgiven. Forcing yourself upon a woman is not something that just goes away with an “I’m sorry”. In response, the victim’s family put up the notion of revenge rape, for which they were allowed to choose any woman from Shehzad’s family.

This entire scenario just baffles me. After having known what their daughter went through, how can they even think of putting another woman through the same? If the rape of their daughter makes them angry enough to demand justice, why are they subjecting someone else’s daughter to the same? Why are women constantly paying for the sins of the men in their lives? This is inhumane and animalistic at its core. How is this justice, when both women are clearly being failed?

Subsequently, a 40-year-old woman was raped by a 16-year-old boy – the victim’s brother – as if this were a casual transaction. As if it was his right to avenge his sister’s rape, by doing the same to another’s. As if the woman’s body was just there, waiting, because her purpose is solely to serve.

Women have come too far to be pushed back into the role of service.

This begs the question: what is wrong with Pakistan? Why are we so constantly and so thoroughly failing our women? Is it the panchayats that are problematic? Is it the mob mentality? Or is there something else inherently flawed in our society?

There is no simple way to answer this, and I don’t really know what the answer would be. All I know is: a woman was forced to pay the price for the crimes of another, and this is not something we should be able to live with.

What happened in Toba Tek Singh is just one example; it is the rule here, not the anomaly. There are countless other instances of the same, ones that never make it to the forefront. Shehzad is just another rapist. The victim’s 16-year-old brother is just another boy raised in a ridiculous system that didn’t teach him any better. The 40-year-old victim is just another ‘consequence’ in people’s eyes.

However, this is where we go wrong. Women will never simply be objects, just there to satisfy someone else’s requirements. A woman’s body, her mind, and her power is all her own, and no one should be allowed to take that away from her. This power won’t just be given to us though; we need to take it ourselves.

To the panchayats: keep your policies off our bodies.

To the men: learn to be better, for the women in your lives.

Most importantly, to the women: Don’t give up. We can, we have, and we will conquer this hurdle as well.