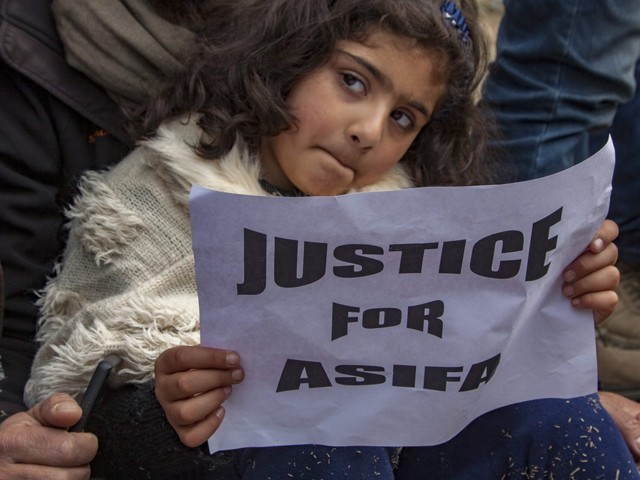 A child holds a placard as she takes part in a protest demanding the death penalty for the suspects in the rape and murder of eight-year-old Asifa. PHOTO: GETTY

What is at play in India today is a systematic dehumanisation of its Muslim community by the ruling establishment in Delhi. The ruling Hindu nationalist government, under the leadership of Narendra Modi, has empowered extremist forces trying to further entrench the country’s religious fault lines. With the rise of Modi and his ilk, a political echo system has emerged in India, where Muslims are treated or looked at in the same way as Jews were seen by the Nazis in Germany in the 1930s.

The tragedy in Kathua is the by-product of that mindset. Located some 550 kilometres north of Delhi in the state of Jammu and Kashmir, the sleepy place has become a symbol of India’s moral black hole, where the rape and murder of an eight-year-old girl is being celebrated and defended by Hindu nationalist organisations holding the national flag in their hands.

The only crime of the young girl was belonging to a nomadic Muslim Bakharwal tribe.

The incident dates back to January 10, 2018, when the victim, who was grazing her horse, was lured away to a nearby forest under the pretence of looking for a missing horse. She was then dragged to a small temple, where she was drugged and gang-raped for a week. Before strangling her and hitting her head with a rock, one of the men stopped to rape her once more.

The investigation conducted by the police blames Sanjhi Ram, the temple custodian, along with some local men and policemen, for the crime. The police report suggests Ram was strongly opposed to the settlement of the nomadic community of Bakharwals in the Rassana area of Kathua, and the innocent little girl was used as a soft target to teach the nomadic community a lesson and drive them away from the area. However, Ram’s arrest, along with the detention of several policemen, took religious overtones as many Hindu right-wing groups in Kathua and Jammu came out in support of the rapists.

Not only that, two ministers belonging to the Bharatiya Janata Party (BJP), also came out on the streets and spoke at a rally in support of the barbarity of the Hindus involved in this heinous crime.

It is a real shame the larger national media, owing allegiance to the ruling BJP, kept on ignoring the inhumane crime. Giving credit where credit is due, there was a section on social media that kept on highlighting the issue and kept the conversation going. However, if we think the BJP and like-minded parties have used rape and religious polarisation for the first time to marginalise the Muslim community, then we are wrong.

Not long ago, when Modi was the Chief Minister of Gujarat, he allegedly perpetrated the worst ever violence against Muslims in his own state, while his administration presided over the death of more than a 1,000 Muslims, along with the destruction of their properties and the livelihood of their families. Many go to the extent of terming the atrocities of 2002 as ‘genocide’. The brutalities heaped on Muslim men and women – such as burning them alive, ripping apart the bodies of pregnant women – are well documented. Furthermore, Modi’s explanation of the incident was restrained and shamefully ignorant of the victims of the pogrom.

When he was fighting the general elections in 2014, many optimists voted for him, believing him to be a changed man. However, the BJP leader could not honour the trust of the people who voted for him, as he wears his divisive image on his sleeve.

Ever since he has come to power in Delhi, his regime and the empowered Hindu nationalists have unleashed a reign of terror against Muslims. The brutal campaign in the name of “love jihad”, the ban on slaughter houses, the ban on meat, the systematic marginalisation of the minority as a genuine Indian citizen, all prove the point that Modi’s developmental agenda has simply been a ruse to entice the Hindu middle class. It has been a well thought out plan to advance the agenda of the Hindu nationalist organisations such as the Rashtriya Swayamsevak Sangh (RSS), which wants to covert the country into a Hindu state.

The BJP’s political complicity in this heinous crime has thus challenged the conscience of the Indian nation. The horrific silence of the BJP leadership on the Kathua incident is a telling reminder that we have a ruling national party which will go to the extent of supporting rape to achieve its political agenda.

Furthermore, the implicit and explicit support of this little girl’s rape has raised a big question mark over India’s moral standing. After all, doesn’t the behaviour of the ruling establishment in Kathua prove the allegations of all those Kashmiris who claim the state cannot be trusted? This anti-Muslim political thinking guides the worldview of the BJP in Kashmir. No wonder we have seen an escalation in violence against people in the valley, all in the name of protecting “national security”.

The Kathua incident has left us all questioning India’s secular and democratic credentials. It is evident Modi’s regime has not only harmed India as a nation, but has also damaged the Hindu religion and its values. Our image as a pacifist nation – a diverse country where syncretic culture flourishes – stands broken by the politicisation of this brutal, inhuman crime.

From now on, if India as a nation trusts Modi’s regime, it loses its moral compass.

The only way for India to redeem itself, apart from punishing the culprits of course, is by throwing out this inhuman, right-wing regime in the next general election.