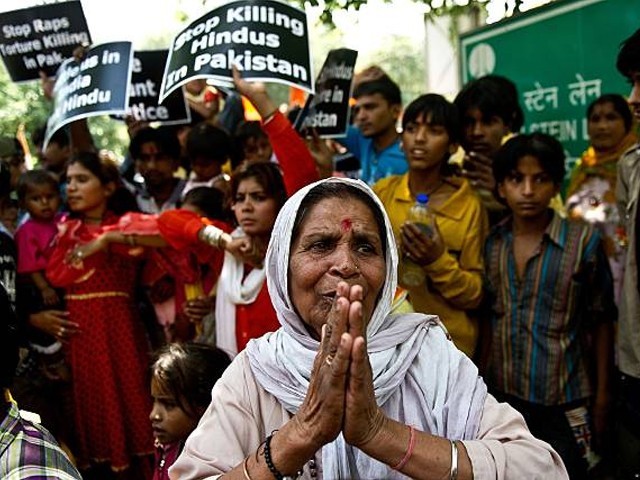 A minority Hindu refugee from Pakistan gestures during a protest outside the United Nations office in New Delhi on April 17, 2013. PHOTO: GETTY

A few days ago, I watched a video clip of a Hindu MNA from PTI, Lal Chand Malhi, in which he gave a fiery speech, pointing towards the discriminatory, and in fact, derogatory attitude of the Pakistani society towards the Hindu community.

He objected to the way in which the Hindu style of worship is mocked. Malhi also lamented about the conflation of Pakistani Hindus with the Indian state by saying,

(They want to abuse India, instead they abuse Hindus).

He claimed that Hindus are equal citizens of Pakistan, and complained that Pakistani society does not treat them as such. He also pointed towards the forceful conversions of Hindus into Muslims in several parts of Sindh.

The MNA was eloquent, which merely accentuated the content of the speech. Each word hit me like a brick and shook me to my very core. Everything he said and objected to was absolutely correct.

A flashback of the time when I was a teenager, a student in an elite, all-boys school in Lahore dawned upon me. I still remember the Urdu textbooks that always portrayed Hindus as anti-Pakistan, and framed the Pakistan-movement as a struggle between conniving and brutal Hindus and pious Muslims. I still remember that several of our teachers used to make fun of Hindus openly in the classroom. Such framing invariably creates a blanket negative opinion of all Hindus, and invariably leads to instinctive hateful knee-jerk reactions.

Once such impression become part of our instinctive makeup, they become permanent, and we start viewing the world through these coloured lenses.

As I look back, I realise that mine was a school which was relatively ‘liberal’ in the Pakistani context; I shudder to even think of the material taught in ‘normal’ schools.

Today, we think of Hindus as some kind of monolithic group, which is bigoted and hates Pakistan, as well as Muslims. What escapes us is that identity is multi-faceted and increasingly complex. In fact, Pakistani-Hindus, in our heads, are ‘anti-Pakistan’ and anti-Muslim simply because their faith.

Yes, today, intolerance in India is on the rise. Today, their textbooks are being changed to reflect a particular point of view. However, what they are doing now, we have done for decades!

Let me candidly ask all my fellow Pakistani-Muslims, particularly those who are concerned about the plight of Muslims in India: have you ever bothered about the treatment reserved for our Hindus? Today, many are worried – rightly so – about the way India is changing. But have we ever wondered about the way Pakistan has always been?

India today is simply becoming Pakistan, to put it simply; an intolerant nation.

Pakistani-Hindus are an endangered minority who become even more vulnerable keeping in mind the context of Pakistan’s historical creation. In principle, this should have made us more careful, but instead, we have become more brazen, resulting in Hindus becoming one of the most neglected minority groups in our society. Malhi was right when he cried about the apathy of the parliament members on forceful conversions, as the reality is, our society simply does not care. To some of us, what happened to Pakistani-Hindus is ‘justified’ merely because Indian-Muslims face equal or worse fates.

Yes, there are times when certain incidents make it to the news, but they quickly lose traction. For example, the gang rape of a young Hindu boy in Sindh is making headlines at the moment. But one of the most tragic parts of the incident is that it involves local office-bearers of the ruling Pakistan Peoples Party (PPP) – a party which always tries to project itself as liberal.

However, I know this will soon be forgotten. In fact, I have seen several posts on social media which trivialise this incident on the pretext that Indian-Muslims face atrocities that are ‘far worse’. Treatment of Indian-Muslim seems to be becoming the main paradigm through which we look at Pakistani-Hindus.

What we as a society need to realise is that being part of the majority comes with a responsibility – the position of privilege must not be misused to malign a minority. Hindus are the biggest religious non-Muslim minority group in Pakistan, and it is thus an obligation on us to ensure they live with dignity and respect in their country.

They have the same rights; to life, liberty, and happiness, as all of us. Ultimately, when we oppress or even neglect the plight of our Hindu minority, we undermine our own concerns for the welfare of Indian-Muslims.