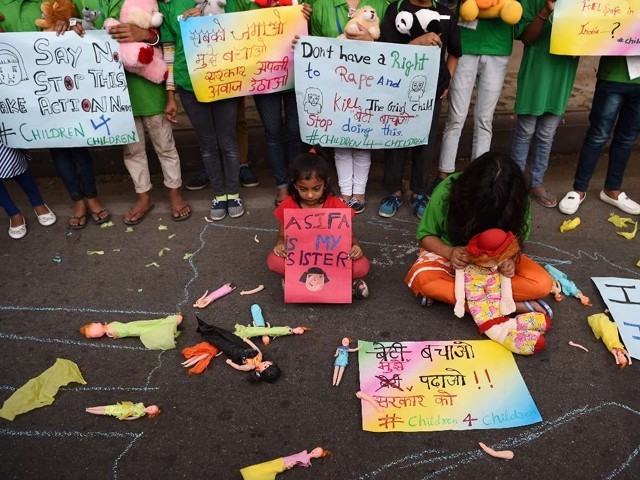 Indian demonstrators hold placards during a silent protest 'Not In My Name' in support of rape victims following high profile cases in Jammu and Kashmir and Uttar Pradesh states, in New Delhi on April 15, 2018. PHOTO: AFP

As India slowly wakes up to the horrors that were inflicted on eight-year-old Asifa Bano in January, collective outrage is gathering steam. New hashtags are trending every day. Horrifying details about the crime are emerging to shake us out of our consciousness. Armchair activists are leading the shout to get justice for Asifa. And rightly so.

It is impossible not to be moved to tears after reading the terrible details about the Kathua rape case. From being drugged, to being gang-raped by men who wanted to ‘satisfy their lust’, to being strangled and bludgeoned to death in two horrific attempts, to her tiny withered body being dumped in a forest, Asifa was treated to inhumanity that is unimaginable. Like many others, I am also walking through my days unable to shake off her brutalised face. How can our nation produce such depraved souls? And how can they be protected under the guise of religion and nationalism? How did we go from #BetiBachao to #BalatkariKoBachao?

Today, we are seeing the true face of India and it is ugly.

But what is even more disgusting is to call Asifa ‘the new Nirbhaya’. Why? Because it shows us that we haven’t learnt our lesson. We haven’t had enough. We haven’t changed. When we call another rape victim by the name of India’s most brutalised rape victim, it shows us that we’ve made peace with the brutality of rape and with what happens to its victims. How can we reduce the victim of rape to a moniker?

But was it? Look at where we are now. Back to square one. Where is the change? There is none. It would appear that Jyoti’s verdict has taught us nothing. Our candle marches, our protests, our outrage, has come to nothing. The relentless work of selfless activists, lawyers, citizens, and NGOs, who fought long and hard to ensure justice, has meant nothing.

Because today we are still seeing incidents like Kathua and Unnao. We are still reading about horrific cases like Rohtak, Jisha, Bilkis Bano, among many others.

Because we really haven’t had enough, have we?

We read incidents of rape every single day; obviously because a woman is raped every 20 minutes in our country. Yet, we react only when the rape is grossly heinous. Our anger is as cheap as our lives. As a nation, we’ve become desensitised to rape. We still need gross human violations to have our collective conscience shaken. We still need brutality to be inhumane for us to realise our humanity. We quantify rape as ‘good rape’ and ‘bad rape’ and make time only for the rarest of rare cases and the most brutal of brutal crimes. We forget that rape is rape, and should be met with revolt, no matter what the severity.

In Saudi Arabia, they behead men for rape. In China, they castrate men. In North Korea, it’s the firing squad. And we – the rape capital of the world –just seem to love our rapists. We are lenient with the way we punish them. Our great ‘Anti-rape Bill’ requires proving offence beyond a reasonable doubt, while giving the accused the benefit of doubt. We do not have effective laws; they exist but are not implemented, like the Protection of Children from Sexual Offences (POCSO) Act. We have a low rate of conviction. We do not use stringent punishment. We even fight against capital punishment for men who treat the lives of women as flimsy. We do not use fast track courts. We have only one judge for every 100,000 people. Our schemes help women in distress after the crime is over, not to prevent crime. Knowing all this, the rapists take a chance. They continue raping, because they know there’s a bigger probability that they’ll walk away scot-free than be indicted. If there’s no punishment to a crime, why will the criminal stop?

More so, we glorify rapists by saying ‘boys will be boys’. When Mulayam Singh Yadav says ‘boys make mistakes’, when Abu Azmi says ‘even women are guilty (of being raped)’, when ML Sharma says ‘there is no place for women in our culture’, we make them household names instead of punishing them for incitation. We normalise rape in our culture. Bade bade deshon mein aaisi choti choti baatein … hoti rehti hai (Such small things happen often in big countries), right?

This subversion is demonstrative in the new video by The Quint where we see the cavalier attitude of men and women, boys and girls, about rape. From saying it is consensual to saying ‘ek haath se taali nahin bajti’(you can’t clap with one hand) to saying that girls are responsible for getting raped, it shows us the pervasive attitude in Haryana about rape. We’ve made it a ‘culture’. And no, this is not about Haryana. Or Uttar Pradesh or Jammu and Kashmir. This is not about Hindu rape or Muslim rape. This is not even about the Bharatiya Janata Party (BJP) or Congress. This is about what we’ve become. Nothing but animals. Because we continue to make women the repositories of shame in these matters. Because it is women who remain victims even after so-called justice has been delivered. Because the extent of violence and inhumanity of sexual assaults against women is not only continuing, it is increasing.

So what about Nirbhaya is there to really be proud of? Yes, the December 2012 case was considered a landmark verdict, the second of its kind in India after the Shakti Mills gang-rape case. Yes, it provided retribution not just to the rape victim but also to our nation’s outraged citizens. Yet, one of Jyoti’s rapists, the juvenile who allegedly inflicted the most serious wounds, is now free. We haven’t even put to use the Rs 3,000 crore Nirbhaya Fund to improve the safety and dignity of our women. Isn’t justice delayed, justice denied? Clearly not enough has been done in the case for us to nonchalantly evoke ‘Nirbhaya’ again.

‘Nirbhaya’ means fearless. The only people who were fearless in Asifa’s case were the perpetrators – the rapists who did the crime and the police who covered up the crime. How can we equate the two? ‘Nirbhaya’ evokes dignity, at least in death if not in life. Let’s give Asifa that, in death if not in life, before we call her ‘another Nirbhaya’. Let’s scream and shout and protest until we get justice for Asifa. Let’s do that before we become dead as human beings. Let’s do it before we fail all the women in our country.

Asifa is not ‘the new Nirbhaya’, because there should be no ‘Nirbhaya’.

The writer is an award-winning author, columnist, feminist and TEDx Speaker. She has previously worked as a journalist with Times Now, NDTV and Bloomberg-UTV. She tweets @MeghnaPant (twitter.com/meghnapant?lang=en)