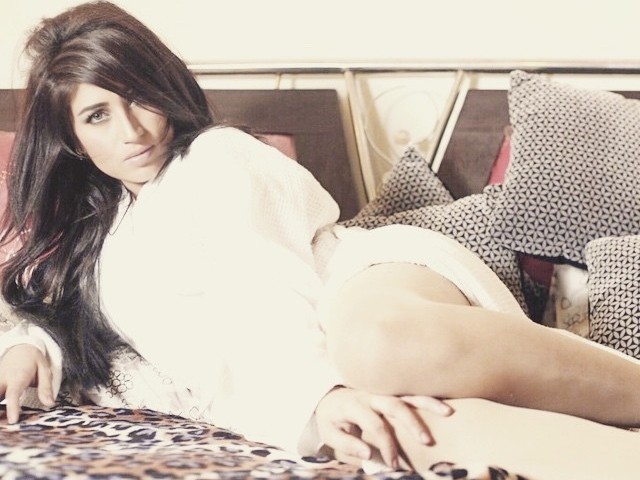 She could do outrageous things and, in doing so, inspired millions. PHOTO: FACEBOOK

The first video I watched of Qandeel Baloch was shared by a friend on his Facebook wall. She was clad in a skimpy grey dress showing off her voluptuous curves. Swaying suggestively and looking straight into the camera she said,

In one fell swoop she not only fully asserted herself as a sexual being – a space denied to women in our society – but cocked a snook at everyone unwilling to acknowledge her agency. I instantly fell in love with her.

Because I come from a conservative family, I can never imagine doing anything even remotely similar. Though my sisters and I were fully supported in our education and allowed to work by our parents, early on we were bombarded with messages from various sources that women who use their charms to attract men are immoral, evil.

I remember walking on the street with my father when we passed a woman sitting in the driver’s seat of a car as a man (standing outside) spoke to her through the window. Two other men stared at her from a distance, as if she was public property.

My father was infuriated by the sight and uttered an expletive – not for those men, but for the woman who, in the public space, invited their attention. I remember feeling violated and diminished. I wanted that space for myself and I knew that if men were staring at her, it was their fault, not hers.

As a teenager I was very fond of western clothing and bought myself a pair of jeans with my pocket money. When my otherwise loving and supportive father saw me wearing jeans, he was furious and severely reprimanded me. My heart sank. I never wore them again, no matter how badly I wanted to; I could not face my father’s disapproval.

I shaped my conduct to suit social expectations. My parents trusted me and allowed me to study and work outside the home. I never attempted anything that could potentially disgrace my parents. I remained very strict and disciplined about how I interacted with men. It was not just because I wanted to please my parents; I saw that it’s very easy for a man to enjoy the good company of a woman and then spoil her reputation. Countless women have had similar experiences of being harassed and blackmailed after ending their relationship with men who claimed to love them.

What if someone reported such a thing to my family? The fear of having to explain myself to my parents and/or prospective husband was enough to dissuade me.

But, you know, I’ve felt miserable trying to observe these boundaries. I have felt extreme pressure and my agency as a person being suppressed. I had to smother my natural expression as a sexual being. It seemed I’ll always have to walk the tightrope to be accepted because if a woman steps out of the strictly defined line she is condemned, disrespected, even killed.

Men, on the other hand, can sleep with sex workers and then easily call them filthy and sinners. They can watch explicit content in their dens but divorce wives if they express sexual desire and interest in the marital bed. It’s acceptable for them to ogle and grope women, but then hold them responsible for it? They can sexually assault young girls because they think underage marriage is religiously sanctioned, but feel threatened by a woman like Baloch who claimed her feminine and sexual space?

Boys will be boys, but she who’s defiant – must be eliminated.

This duality and repression impacted me acutely. I’ve often wondered what such deep sexual suppression does to society as a whole. Why is a woman’s sexual agency so threatening to social order? Why does she always have to fit the role of a daughter, sister, wife or mother? Why can’t she just be herself – a woman – and feel just as accepted?

In such a suffocating atmosphere, Qandeel Baloch was a whiff of fresh air, even when she looked like a nut case. She was unapologetic and simply did not care about what others thought of her or expected of her, even when she dealt with hate speech – sent her way by the very people who watched her videos probably a hundred times over. Her authenticity and audacity was a big shock for most Pakistanis that are used to living dual lives.

Qandeel Baloch had the guts to hold a mirror to a society where maintaining a pious public persona and a separate private life is the norm. She reminds me of Saadat Hassan Manto’s character ‘Mozelle’ from the short story Mozelle set in Mumbai during the partition riots of 1947. Manto puts in a sharp contrast; the empty religiosity of a Sikh character, Trilochan Singh, with the courage of a Jewish woman, Mozelle, who refuses his marriage proposal because he’s too religious and conservative for her taste.

Trilochan’s reverence for religion is tied to his turban, which he refuses to remove for fear of revealing his shaved head to his young fiancée. Mozelle, on the other hand, does not believe in outward manifestations of religion, but demonstrates true courage and compassion as she attempts to help Trilochan’s Sikh fiancé, Karpal Kaur, escape from a sensitive neighbourhood. She goes out naked onto the street to distract the rioting mob – but gets killed in the process.

In powerful strokes, Manto delineates a bleeding Mozelle without any clothes on, lying in the middle of a small crowd. In her death throes, she refuses to cover herself with Trilochan’s turban when, dazed by the horror of what had happened, he finally removes it and offers it to her.

It seems, like her, Qandeel Baloch did not have any need for social approval. She did not need to please anyone to feel accepted. She could do outrageous things and, in doing so, inspired millions.

She is my hero. Rest in power, Queen!

The writer is a journalist and tweets as @ishrats (twitter.com/ishrats)