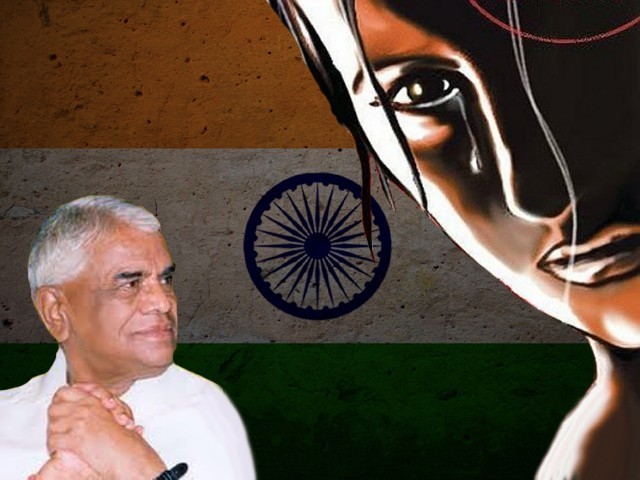 “Rape is a mental disorder. Rapists do not inform police or government that they are going to rape. It cannot be curbed because it’s a mental disorder problem. We could have acted on motorists if they do not wear helmet. How can we prevent rape as it happens at a secluded place? This is a social crime which depends on men and women. Sometimes it’s right, sometimes it’s wrong.”

The Bharatiya Janata Party (BJP) has ostracised these remarks calling them the politicians ‘personal view and not in any way representative of the party’, but is that enough?

Should a person, pledged to preserving law and order, be given the authority or liberty to pass such irresponsible remarks? Can such statements be legitimised under the banner of freedom of speech? Is this tacit permission and acceptance of a dangerous rape culture rampant in Indian society?  Is this how a person in position of power is supposed to act? Are these the kind of role-models we want our kids to be imitating?

Also noteworthy is the fact that a statement is yet to be made by the Indian prime minister about the recent rape of two teenage girls in Uttar Pradesh (UP). On the international front though, the series of sexual transgressions in India has been met by clamour and the UN has condemned the heinous indulgence.

In another episode, Mulayam Singh Yadav, head of the regional Samajwadi Party who runs UP, attempted to chastise legal charges that foresee the death penalty for gang rape in his own nonsensical manner saying,

“When boys and girls have differences, the girl gives a statement that ‘the boy raped me,’ and that poor boy gets a death sentence.”

While Mr Yadav could argue that boys make ‘mistakes’, such mistakes should not be made whilst sitting in the state assembly, or should it?

Unsurprisingly, like his father Akhilesh Yadav, Chief Minister of UP, also shares a very similar view on rape. Complaining about how the media is infatuated with UP and its problems, he said rape happens everywhere and all the media has to do is Google it and get the figures.

Thank you Mr Akhilesh for enlightening us about the existence of… Google was it?

Perhaps, while Googling these figures, the public will come across the alarming figures demonstrating how violent crimes touched a high of 33,824 incidents in 2012, including nearly 2,000 rapes and 4,966 murders under your governance.

And while we are at it, let’s not blame the media for throwing light on a topic that otherwise, probably due to your immense efforts, would have been conveniently swept under the rug. Instead of attacking the messenger, try correcting yourself and stop shirking your responsibilities towards the men and women around you.

Next up in line is Ramsevak Paikra, a Chhattisgarh minister who manages law enforcement. He said,

“Such incidents (rapes) do not happen deliberately. These kinds of incidents happen accidentally.”

In India, rape is reported every 21 minutes. While that may be an accident for you Mr Paikra, is the pint-sized conviction rate, of 26%, for rape cases in India, also by accident?

Another alarming aspect in these rape cases is that the Dalits, a mixed population in India that was traditionally regarded as the ‘untouchables’ have been routinely raped by the upper castes. Despite efforts being made to improve this situation of caste discrimination, the steps taken are, evidently, not enough. It is estimated that a crime is committed against a person from the Dalit caste every 18 minutes.

In a land where rape is on an alarming rise, politicians who do not respect women, and are so out rightly insensitive about the issues plaguing women in society, are a part of the problem – not the solution. The towering sexual violence in India will never be stemmed if leaders, responsible for ensuring law and order, have a mentality that protects rapists.

The author has completed her bachelors from NUST and is looking to encourage respect and value for all living creatures. She tweets as @ammarah_aftab (twitter.com/ammarah_aftab)

Give Pakistan a chance