For a nation obsessed with fair and lovely, are we really surprised at #Blackface? 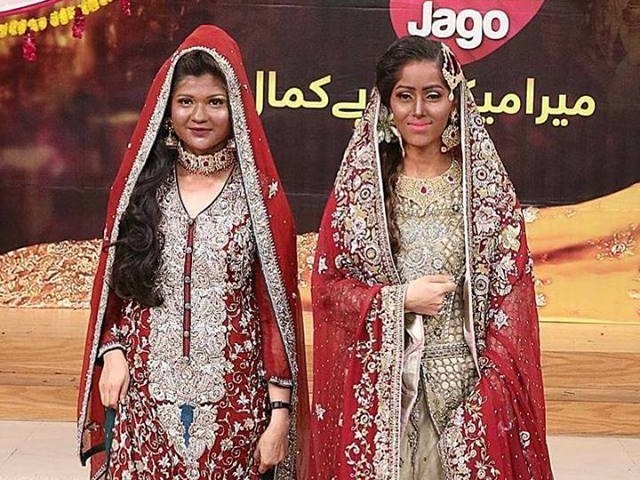 A segment on a morning show required participants to turn naturally fair-skinned models into a darker complexion. PHOTO: FACEBOOK/ THEPAKISTANIMARTHASTEWART

If there is one thing Pakistani TV is good at, it is never failing to surprise audiences with how low it can go in its attempts to “entertain”. The most recent instance of such an effort took place on Sanam Jung’s morning show, Jaago Pakistan Jaago, where a bridal makeup competition segment required participants to turn naturally fair-skinned models into a darker complexion, and then give them a bridal makeover.

As I came across pictures of the models, with their faces transformed to dramatically darkened skin tones and dressed as brides, it disturbed me to see yet another racist message being propagated to Pakistani audiences. As if Sana Safinaz’s recent campaign had not been enough of a disaster in its depiction of our ignorance and casual attitude towards racism.

Before jumping to any conclusions, I found it essential to analyse the show after watching it. After doing so, it was clear the underlying motive of the segment was to show viewers that dark-skinned women can be beautiful brides too. The ladies discussed why it was implied that dark is not attractive, and what makeup techniques can be used to make darker women seem beautiful on their wedding day. However, this has prompted a discussion over why it was heavily implied that dark skin tones are actually not beautiful, and that giving a dark-skinned woman a bridal makeover would be a “challenge”.

It is ironic that a show titled Jaago Pakistan Jaago would be this ignorant when tackling a very prevalent and disconcerting issue in our country. While their words suggested that yes, dark is beautiful, their actions suggested no, it is actually not. After all, if they truly believed what they were preaching, would they not have brought actual dark-skinned girls to model? As a South Asian country, was it really that difficult to find young women of darker skin tones for the segment?

@SanamJungPK @Humtvnetwork Absolutely appalled with @JagoPakistan_ newest episode where fair skinned models were painted darker to prove that darker skin can too look beautiful with makeup. Was it too difficult to find models of darker skin?! pic.twitter.com/pYFEvUMWYG

It is no secret that our colonial past has led to us shunning our natural dark skin and developing a fixation with “whiteness”. In our society, is a woman believed to be beautiful if she has dark skin? No, unfortunately; in South Asia, the notion of a woman’s beauty and desirability is directly linked to her “fairness”. Otherwise, why would every mother-in-law scramble for a gori bahu (fair daughter-in-law)? When is the last time we saw an advertisement not telling us to get “fairer in just seven days” or that “white is perfect”?

For a nation obsessed with fair and lovely, are we really surprised by this?

Not only were the models essentially wearing what is called “blackface”, the show used racial slurs such as “habshi”, “makrani” and “negro” throughout the episode, making this a shameful attempt at a “positive” message.

HOW ARE SOME PAKISTANIS WITH SANAM JUNG ON PROMOTING BLACK FACE ON HER MORNING SHOW? HOW IS IT 2018 AND PAKISTAN IS AIRING SOMETHING THIS OFFENSIVE ON NATIONAL TV?! I can’t comprehend how uneducated our country is… THIS IS RACIST. I hope they boycott and cancel her show. pic.twitter.com/qwQxfAK4F8

How could TV show host Sanam Jung not know that using the N-word is not okay https://t.co/XjRpOHQjLa pic.twitter.com/1yqcG3Sa9L

It is known that morning shows are viewed by a wide range of audiences comprising of women and young girls across the nation, and their hosts are looked up to as role models. Given their level of influence, it is not unreasonable to expect better. If influential figures such as Jung are seen casually promoting such a mindset, this will be deemed as acceptable behaviour in the minds of the masses.

What we need in our society are more women who actively encourage progress, not women who contribute to its regression. After all, this is certainly not the first time that such absurdity has been witnessed on morning shows. Then why does it continue to be acceptable for such shows to encourage women to expose extremely personal matters on national television? After all, social work cannot be done by sensationalising social issues.

What about the constant and unrealistic focus on weddings and physical appearances? Are women on television only meant to be eye candy, divested of intellect? Why have we restricted women to the circumference of family drama, wedding planning and dumbing themselves down?

I feel sick. Lawn campaigns in Pakistan comprise of using indigenous minorities & darker skinned people as props. Morning shows capitalize on the adornment of dark skin as a challenge. We propagate racism at home & complain about it abroad. Disgusting. #HumTV #JagoPakistanJago

the internet has the power to be malignant and harsh at times, I hope it is also used to educate and inform. Racism is not okay. Not in the West or the East, not anywhere. It’s about time we learned this. #MorningShow #humtv #JagoPakistanJago #blackface #Pakistan

There is no doubt that just as racism exists in every society, it exists in Pakistan too; however, it is evident that class discrimination accompanies racial discrimination here. Before this incident, when I heard Jung’s name, I imagined a soft-spoken, bubbly young woman adored by the masses. Unfortunately, the image was shattered as I viewed this episode. I was shocked to witness the way Jung interacted with the participants, which was drastically different from the typical sweet demeanour present when she interviews high profile celebrities. Throughout the episode, Jung, along with her companions, can constantly be seen harassing and disrespecting the make-up artists, who most likely belonged to middle to lower income areas in Karachi. Would this still be the case if these make-up artists belonged to the elite, or were famous? Is our media determined to prove that not only are we racist but also classist?

Had literally anyone present during recording realised or taken action against such flagrant discrimination, or had the hosts monitored their behaviour and their tone, the fate of the episode and the show’s reputation could have been saved. If our society truly wants freedom from the shackles of beauty standards rooted in our colonial past, then it must stop promoting the notion that “fair is lovely”.

Further, if morning shows really want to spread the message that dark is beautiful, then they should halt the fairness campaigns and start one for Pakistani women to embrace their skin as it is. There are, after all, other ways to spread positivity; ways that do not have to involve racial slurs or fair-skinned models with blackface.