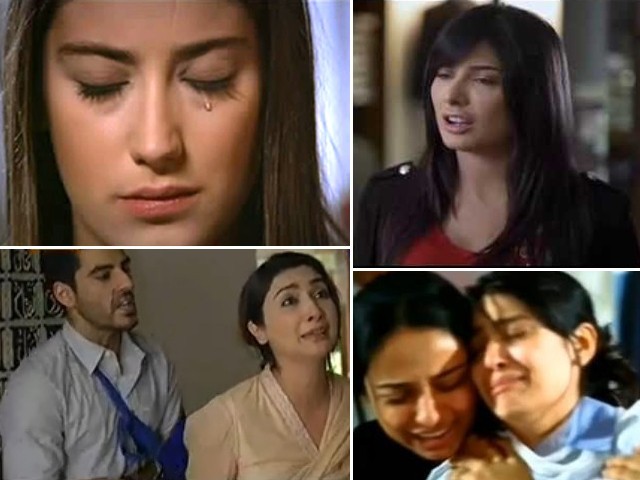 Somewhere, this over projection is making the idea of domestic violence socially acceptable as the constant exposure can make the society immune to it and further reiterate the patriarchal system.

The troubled image of modern Pakistani women conjured up by Pakistani dramas is extremely distorted and single dimensional. Stories, it is said, are a subtle yet are the most influential way of documenting the social evolution of a society. The story of a woman sells but the modern media has gone one step ahead by proving that the story of a woman being abused, tortured, beaten and humiliated sells faster.

The massive projection of domestic and women related violence might appear as an attempt to serve the cause but a closer look will reveal an entirely different and gross story. The disturbing image of woman being pushed, slapped, bad mouthed (mostly by close family) constantly overwhelms the TV screen. No matter how fast you switch channels, it is impossible to escape the harrowing images.

Domestic violence is a highly sensitive area and must be advocated in subtle and meaningful ways. If mishandled – the way it is on our dramas – it could create an impact far more unsettling than sexually explicit content. Such disturbing content must appear with prior warnings to avoid the uneasy situation in a family living room.

When children see family settings in a drama they instantly relate it to their own family and when it turns violent it certainly creates unfathomable effects of insecurity and fear in their subconscious. The sight of explicitly treated domestic violence creates embarrassing situation among the family as well.

Just to quote an example, Hum Tv’s Kisay Apna Kahen shows the character Iqra cutting her wrist and soaking in blood over little skirmish in the house.

What kind of message are we sending across to the young girls especially with newspaper already filled of such news?

Somewhere, this over projection is making the idea of domestic violence socially acceptable as the constant exposure can make the society immune to it and further reiterate the patriarchal system. It is lethal for an audience already overdosed on terrorism and violence.

Projection of reality is one thing but the exploitation of domestic abuse to gain ratings is inhumane. Special care is being taken to make these sensational visuals part of the advertisement, which makes it even more unnerving. Geo Tv’s drama serial Bewafae’s ad shows the husband slapping and abusing his wife. The popular Turkish drama serial Feriha’s ad has the protagonist beaten by her father, brother and then by her husband. The drama has much more to it, like the ambition of a girl to do something better with her life, but these visuals are specially chosen to grab viewers’ attention.

The women in our contemporary dramas are objectified and the only purpose they serve is to win a man’s heart. The conflict is just one: how she could win this man and rest of the plot sails on her manoeuvres in this ordeal. It trivialises inter-woman relationship by pitting one woman against the other and that too for the sake of a man.

ARY’s Shukk spins the same formula by making the hero ending up with two wives and both of them are clinging to the man, unwilling to let go, as if it is impossible for them to survive on their own. ARY’s Kabhi Kabhi Pyar May starts with an independent, strong headed heroine Eshal but after being divorced by the love of her life, she tries to find refuge with another man.

There are no dilemmas, self-discovery and development of the female characters. The female leads are no more interesting, inspiring and awe worthy like they used to be; in fact, they have become repetitive, mindless, muted, predictable and flat.

The degeneration reminds me of strong female leads we used to have. I remember Shahnaz of Alpha Bravo Charlie, she chose Gul Sher over his stronger friends and his death led her to a profound road of self-discovery, instead of marrying one of the other friends. Zara of Tanhaiyan, turned an entrepreneur after her parents death and took care of her sister without looking for any fancy shortcuts. The character of Nazli in Dhuwan avenges her lover’s death independently, instead of sulking in the Bechari-syndrome.

We are psyched into believing that the violence is fed to us on our demand but the reality is, like a curse, the degeneration of society has seeped into our dramas. Drama industry is cocooned into the safe zone and not ready to venture out and experiment.

We are living in the exciting times of Sharmeen Obaid Chinoy, Samina Baig and Malala Yousafzai, so let them shine in our stories. Trust me, their stories will sell too.