This is no longer a ‘Goray rang ka zamana’ 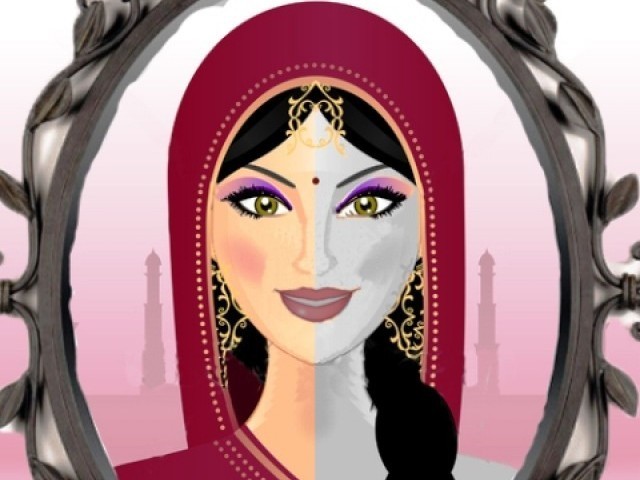 The irony is that no matter how fair a girl is, though it might get her a good marriage proposal, it still would not guarantee a happy marital life. PHOTO: STOCK IMAGE

(It is the era of fair complexions, this era will never get old.

What are you afraid of girl? Your complexion is fair!)

More than two decades ago, this song was sung by a popular Pakistani band called Vital Signs; a super hit of its time. In the song, the lyricist highlighted a popular notion that has been haunting the subcontinent for ages. The sad truth: A woman has nothing to be worried about if she’s fair.

While many shrug this off as ‘a piece of entertainment’, the lyrics portray the mind set of our society, and that existing in most of South Asia, very aptly. Shops and markets across the subcontinent are stacked to the top with products that claim that with a single application of the said fairness product, your life would become nothing less than ‘a bed of roses’ – and they sell like hotcakes. From beauty creams to body lotions, soaps to face washes, toners to masks, all sorts of whitening products guarantee to be the solution to all your life problems.

In fact, it is not just the women who have this fairness obsession; a friend of mine was told to dress up and look nice because a boy’s family was coming to ‘see her’; a prospective marriage proposal. Unfortunately, the girl was later told that they were not interested because they were looking for a fair complexioned girl which, according to them, my friend was not. Then there are the mothers who openly declare that they want their sons to marry girls who are ‘white as milk’.

Leave real life aside, we haven’t even spared our celebrities! In a conversation among a group of friends, one of the guys very proudly announced,

Some even believe that her complexion is the reason Ranbir Kapoor left Deepika Padukone for Katrina Kaif! They say beauty lies in the eyes of the beholder but when the beholder’s criterion of beauty is solely fairness, it is no wonder that the businesses to gain most popularity are those advertising that one secret ingredient; fairness. Whether the product is of high quality, or made in some substandard laboratory, when they are made available to the public, the rich and the poor all indulge in buying the product. Advertising agencies further take advantage of this inferiority complex by playing on the psychological aspect, making consumers believe it is essential for them to look fair to feel good. While one ad selling such a product will say,

(In only 15 minutes, I turned fair fair)

(Now even I can become a bride)

And in yet another, the husband will lovingly tell his bride that,

(It seems like the moon has come down to Earth)

And if you think these ads have nothing to do with the real world, here is a reality check. The picture below has been taken from the matrimonial section of one of the newspapers’ in Pakistan:

Since the demand is increasing day by day, the other side follows with the following sorts of matrimonial ads:

There are many times that I have seen friends carrying fairness products in their handbags and I wonder if they really need them. But then I realised that, for our society, no matter how beautiful a girl is, she is never ‘fair’ enough.  In a country where a large segment of society still brings up its daughters telling them that the route to a secure, successful and happy married life is fairness, it is no wonder that women are subjected to such exploitation; they are born and bred in it, so when they are raised believing they have to reach a certain goal, are they to be blamed for striving to achieve it?

What is sad, however, is that we don’t seem to realise that being fair may bring in a ‘good’ marriage proposal but it does not, in any way, guarantee a happy married life.

While we have songs like ‘Goray rang ka zamana’ I wish that parents would instead ask their daughters and sons to pay more attention to lyrics like these:

(You have to look for your own potential, whether you have a partner by your side or not.

You have to believe in yourself; don’t keep looking for any support.)

If we started raising our children to believe these words instead of believing that fairness was the key to happiness, we wouldn’t just be raising better children we would be nurturing a healthier generation.

A business graduate working in the corporate sector. She tweets @KiranW_ (twitter.com/KiranW_)

A Lahori’s first visit to Karachi

Why are we banning Maalik when it’s a fictitious portrayal?

Why is it such a big deal that Afridi thanked the people of Kashmir for their support, India?