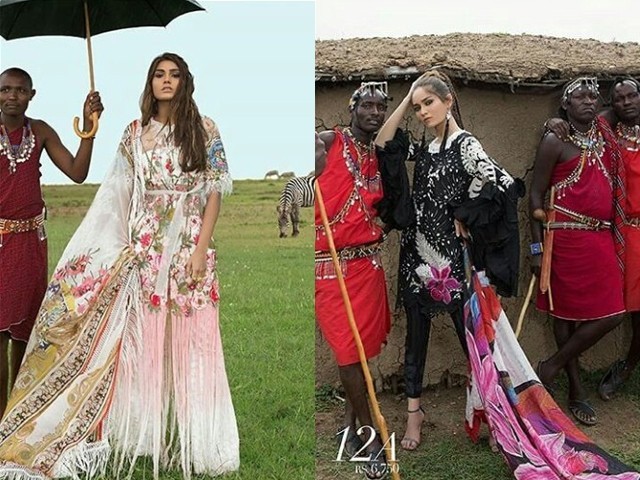 The backlash to the Sana Safinaz campaign has been unprecedented, with people suggesting this is blatant racism and is exploiting the culture of the native tribes. PHOTO: INSTAGRAM/ SANA SAFINAZ

Social media may have been created for people to be more closely connected, but it would not be an overstatement to suggest that today it is largely just a tool for people to share their outrage with the world. The most recent case is of a new campaign launched by Sana Safinaz, where the models being surrounded by natives of the Maasai tribe in Africa has generated a lot of backlash on social media.

The response has been unprecedented, with people suggesting this is blatant racism and is exploiting the culture of the native tribes. Of course, many marketing campaigns have gone wrong before in Pakistan, but this level of reaction over an issue such as racism has rarely been witnessed here in the past.

#SanaSafinaz learned nothing from their infamous 'coolie' ad campaign a few years ago. Now they're at it again appropriating African culture and using black people as props. Apparently #racism sells! @sanasafinazoff pic.twitter.com/UDofKaWsiz

sana safinaz a large pakistani clothing brand using native africans and their culture as props. yall still want to tell me the deep rooted racism in pakistan is not there? try again pic.twitter.com/jBEZUshAUY

When I first saw these images, I was in awe of the beautiful animals roaming around freely and the picturesque background – such a different campaign, I thought. The first billboard I noticed did feel a bit strange, as Pakistanis are so accustomed to seeing only dolled up faces in clothing campaigns.

I did, however, also find it rather unsettling to see locals juxtaposed against perfectly-styled models, and it made me wonder if they were there just to be a part of the landscape. The most disturbing image, perhaps, was of the tribesman holding an umbrella for the model, as it was very reminiscent of the problematic ad starring Aishwarya Rai, where a little African child held her umbrella. 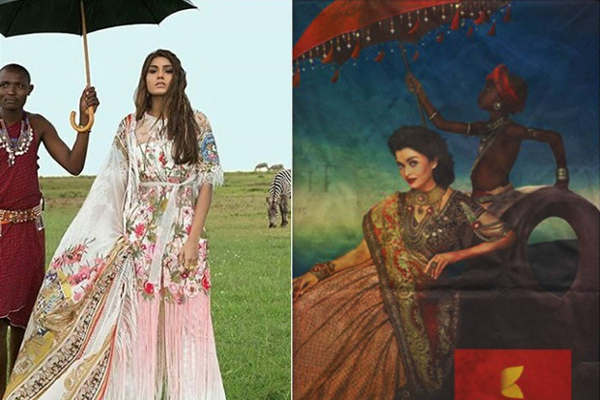 However, on a global scale, it is a marketing gimmick to make a campaign as controversial as you can, in order to make it part of the conversation and thus, “market” the product. For instance, an ad campaign by H&M Kids came under fire recently, and is a textbook example of a marketing attempt gone wrong. It is hard to imagine no one in their team seeing an African American child wear a T-shirt with the message “coolest monkey in the jungle”, and realising how problematic it appeared; especially given the current racial divide in America. The allegations of racism launched subsequently snowballed into huge financial as well as reputational loss for the brand. Their stores were attacked by protestors, leading to the brand finally recalling the ad and the product. Such is the power of social media when it comes to an outrage inducing issue.

. @hm, have you lost your damned minds?!?!?! pic.twitter.com/EYuCXLZtv3

Racism, in particular, especially against black people, is becoming a more mainstream issue due to Hollywood’s recognition of the problem. We are living in a world in which social media outrage is taken seriously, causing people to be more wary of what they post, as problematic ideas can lead people to lose their jobs and be shunned by society. We are now living in the world of Wakanda, where the African race is celebrated on screen and we are reminded to appreciate what is perhaps the most marginalised group on the planet. Even a well-meaning attempt can backfire as trivialisation of an issue, with Kendall Jenner’s Pepsi ad being the most obvious example. The ad caused a lot of embarrassment, not only for Pepsi but also for Kendall, as her association with the ad became the butt of the joke and the focus of many hilarious memes.

The outrage is not restricted to a particular group. Indians, for instance, are quick to react when foreigners shoot in India wearing traditional dresses, often citing it as cultural appropriation. Additionally, both Kendall and Kim Kardashian have faced criticism for appearing on the cover of Vogue India, with the main complaint being foreign models gracing the cover of an Indian magazine.

Thus, social media has created a tightrope for advertising, as it can make or break a product in moments.

In their defence, Sana Safinaz explained their visit to the local tribes in Kenya, and clarified their intent to promote inclusivity and highlight other cultures through their campaign. It’s hard to gage this justification. Nonetheless, the ad has been removed and many people have come forward to boycott the brand, even though the first-day sale pictures being shared tell a different story altogether.

#SanaSafinaz using African culture as subservient props for a shoot is exactly why I'm not buying their lawn this time! This isn't the first time this brand decided to appropriate a group of people who are often referred as disadvantaged #BoycottSanaSafinaz @sanasafinazoff https://t.co/Vpkl0wvwq2

Was looking at someone’s snapchat from the Sana Safinaz lawn launch and women were going insane trying to get the outfits so I mean their target audience could not care less about a blatantly racist campaign. Good job, fellow countrywomen https://t.co/7T3MJaTZpI

On the other hand, this is not the first, nor the last time Pakistani brands have been problematic in their approach. However, while this one triggered immense backlash, Cross Stitch’s recent ad with Syra Shehroz prompted no debate or conversation. Where we are all agitated about the representation of the Maasai tribe, we do not care when it comes to our own culture being used in a similar manner. Syra posing alongside women covered in a ghoonghat (veil), completely devoid of their identity and simply there as props, is not considered problematic at all. 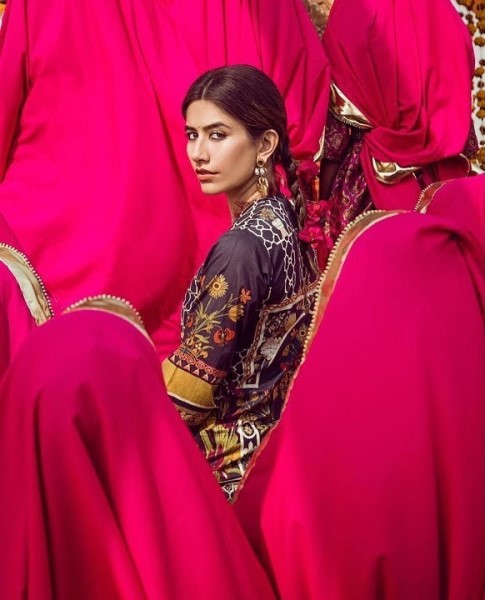 Why have people on social media not noticed anything wrong with this? Why are we so willing to point out the “racism” of the industry in this instance, yet are silent as we treat our own culture in a similar manner and portray it as regressive? Are we so accustomed to the racism and classism in our own surrounding that we have become immune to it?

And after Sana Safinaz, here goes another of our favorite brands using kids from underprivileged communities as objects to sell their luxury lawn! pic.twitter.com/cdzRN8k89B

Yes, the Sana Safinaz ad can be considered problematic. But this ad is not in isolation, nor does it come as a surprise in an industry known to be frequently inappropriate. Somewhere along the way, we have all become increasingly sensitive and easy to trigger. As they say, you can no longer crack a joke without offending someone, and this sensitivity is what the fashion industry relies on to market their products.

So either the industry is racist, or we are selective in what we choose to unleash our outrage upon.