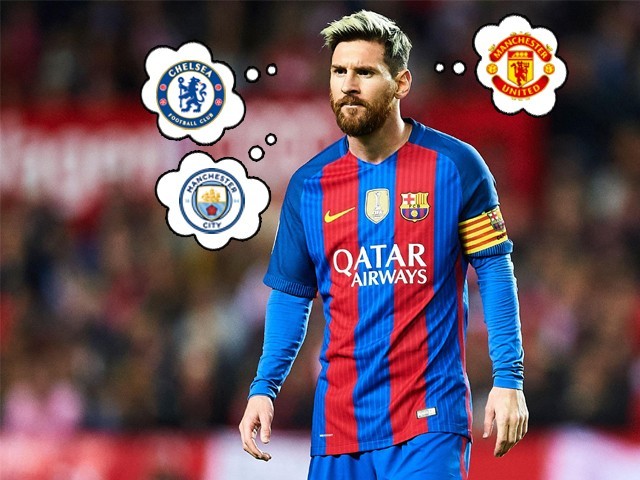 The most obvious question to ask is where should Messi play if he decides to leave Barca?

In November, Lionel Messi renewed his contract with FC Barcelona. Apart from the same old, same old, in which he had his salary raised, surprisingly or rather unsurprisingly, he had a get-out clause added in his contract as well.  This clause would allow him to leave for free if Barcelona fails to play in a “competitive” league.

Catalonia, in which Barcelona is situated, risks getting thrown out of the Spanish La Liga should it become independent from Spain. FC Barcelona, whose slogan is “Més que un club” which translates into “more than a club”, portrays itself as the defender of Catalan value and it seems that it will have to find another league to play in.

Apart from Barcelona, Espanyol and Girona are two Catalan-based clubs which also compete in La Liga. Both of these clubs aren’t the top performing clubs in La Liga or in any other football leagues. This shows that if it comes down to Catalonia forming its own league from their region, it would not be a competitive one.

However, it is not unique for a team to play in another country’s league. For example, AS Monaco, even though they are based in principality of Monaco, compete in French Ligue 1. There is a lot of speculation that Barcelona would join League 1 after Catalonia’s independence. However, it’s still unclear whether Messi would find it competitive enough. Hence, there is a good chance that he might exercise this clause if Barcelona is out of La Liga.

Then, the most obvious question to ask is where should Messi play if he decides to leave Barca? We all know his credentials. It would not be difficult for him to get into any of the top sides, especially when they would not have to pay a dime in the form of transfer fees.

Currently, Messi has a release clause of around €700 million.

As someone who has been the best for so many years, Messi would want to go to a club that could allow him to win Ballon d’Or. This is possible when you help your team either win noteworthy domestic trophies such as the Premier League or continental trophies such as Champions League, or both, by scoring goals and providing assists. Furthermore, the club should be able to afford his more than half a million euros per week wages.

Given these criteria, I think he should move to one of the following three Premier League clubs: Manchester City, Chelsea or Manchester United. Premier League with the current talent and money it has is the only place where he can get both of the things that I mentioned earlier.

In my opinion, Messi should go to Manchester City and it is in fact a very obvious choice for him to make. The club is currently managed by Pep Guardiola under whom he has had a tremendous spell back when the Catalan managed Barca. Therefore, adjusting to a new manager would not be a problem for him. Both of them have intimate knowledge about each other and that would help them work together better. Furthermore, like Messi, Guardiola is a winner who is in the game to win. Moreover, City has a great squad with players like Kevin De Bruyne, Sergio Agüero, David Silva, Leroy Sane and so on. They play the same brand of football as Barcelona does, beautiful and efficient. This would allow Messi to easily adjust into their system.

Most importantly, Man City has the financial muscle to bring and retain the best players. According to some sources, Guardiola is interested in acquiring Sergio Busquets. Therefore, Messi moving to Manchester City would not be a surprise.

However, unlike the other two clubs, Manchester City does not have a lot of silverware to show for. They do not have sufficient support for the club either since it is a club that has seen success only recently.

Chelsea is another great option for him. They also have a great appetite to win. They are the current winners of the Premier League. Moreover, they have a relatively rich history than City. They have been a regular in Champions league for a long time and have won it once. As for their future, they have a decent squad with players such as Eden Hazard, Alvaro Morata, Gary Cahill and so on, who have won trophies in the past and can in the future as well, and with Messi in their side, their squad would only get stronger.

Messi can play on the wing or in the middle in Antonio Conte’s 3-4-3 formation. Moreover, with players like Cesc Fàbregas and Pedro Eliezer Rodríguez with whom he has played previously in Barca, Messi will have a certain chemistry and it will be easier to communicate with them.

However, the problem with Chelsea is its owner Roman Abramovich. His lack of faith in the Chelsea manager, Conte, is disturbing. Messi might not want to be a part of a team that has ongoing internal politics and is uncertain about the manager.

Lastly, he can move to Manchester United. It’s a rich team with an excellent squad which includes Paul Pogba, Zlatan Ibrahimovic, Jesse Lingard, Anthony Martial and so on. It also has a determined coach, Jose Mourinho. In fact, out of the three, Manchester United is the most prestigious since they have won the Premier League title more than any other team. It is also still in the race to winning the Premier League this season, but chances seem slim. Moreover, the club is also a regular in the Champions League.

However, Messi has been Mourinho’s opponent in the past, especially when Mourinho was the manager of Real Madrid. Mourinho has had a complicated relationship with Messi in the past, where he has passed unprofessional comments about him. This might hamper their relationship which could lead to a sub-optimal performance. Furthermore, Mourinho’s Manchester United tendency to park the bus in which he might have to perform defensive duties and their bland style of play might not suit him. Considering that Messi is a go-getter, he’d want to press for attack from the word get go and that might not bode well with Mourinho since he likes things being done his way.

Furthermore, Cristiano Ronaldo is a favourite for Manchester United fans since they saw him rise to the top. The club gave him the number seven, CR7, that he is known for around the world. The support that United fans have for Ronaldo may make Messi think twice about joining the club. United fans may not be as welcoming as he would expect once he joins the club. There are also rumours of Ronaldo joining United again, and as we all know, Messi and Ronaldo in the same team is probably (read definitely) never going to happen.

It is important to also note that Manchester United is losing prominence to its rival, City. Just because United was successful in the past does not mean it will be in the future as well. Their recent performance in the League and in Europe is dismal. Why would Messi settle for less when he can go for the best?

Considering the aforementioned analysis, it is safe to say that if Messi were to leave Barcelona, we might find him wearing a Manchester City jersey. Fans of La Liga may be disappointed in losing a cherished player, but Premier League fans might get to experience the best of the best playing for their league and any team that Messi chooses; their rivals will probably start sweating.

The author is currently an undergraduate student at LUMS. He tweets @umerasif01 (twitter.com/umerasif01)

From Mourinho to Solskjaer: A tale of Manchester United’s stunning comeback