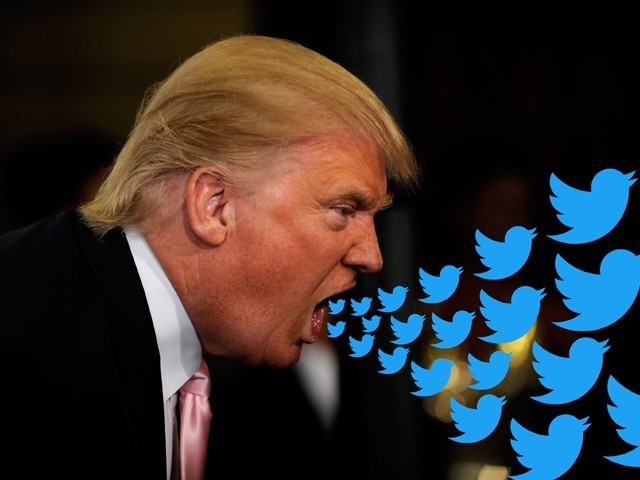 Trump has used Twitter to get into fights with his political opposition, the news media, foreign leaders, municipal executives and washed up reality television stars. PHOTO: NEW REPUBLIC/GETTY

American President Donald Trump welcomed 2018 with the same practice that he has employed almost for the entirely of his presidency – sending out an incoherent tweet. Unfortunately, this time, his tweet sent into frenzy much of Pakistan’s arm-chair analysts as well as talking heads from the myriad of shows on television. This was primarily because Trump chose Pakistan as the subject of his ire in his very first tweet of 2018.

Let’s look at the tweet objectively. Twitter, the platform spitting out micro-statements, is not the same as a well-researched policy document. It is a medium that celebrities (real and aspiring) use to put out statements as mundane as what they had for breakfast or to complain about the latest TV show. Users that are a bit more evolved use it to send bursts advertising their books and/or social issues.

And then there is Trump.

Trump has used Twitter to get into fights with his political opposition, the news media, foreign leaders, municipal executives and washed up reality television stars. This particular tweet, however, was directed at the political leadership in Pakistan. And in them, he challenged legions of political commentators and politicians that routinely utter even more nonsensical logic than Trump himself.

Trump states that the United States has foolishly given more than $33 billion in aid to Pakistan; a fair statement per se. Objectively speaking, the US has spent an amount of $5.6 trillion on the wars it has sprung since 9/11. A significant chunk of this money is actually reimbursements to Pakistani security forces for the actions it takes on behalf of the Americans.

Secondly, $33 billion is a small part of $5.6 trillion. America’s overseas wars are a mess, and have been going on for too long in too many places, specifically Afghanistan, Iraq, Syria and Pakistan. So why did Trump single out only Pakistan? For what it’s worth, Pakistan is an impoverished, developing country trying to transition into a functioning democracy with the help of an inconsistent, erratic leadership. If the unpolished and myopic leaders of Pakistan can fool the Harvard and Princeton educated leaders of the US over and over again, then shame on the Americans.

Pres Trump quoted figure of $33billion given to PAK over last 15yrs,he can hire a US based Audit firm on our expense to verify this figure & let the world know who is lying & deceiving..

The US just wants to ‘win’ in Afghanistan/Iraq/Syria & the many quagmires they are involved with. No plan to get out. All they are left with is excuses, blame games and denial.

Then Trump goes on to state that Pakistan provides “safe havens” to terrorists. Since 9/11, more than a million people have been killed across the world due to the ‘war on terror’; in Pakistan alone, more than 80,000 deaths have occurred due to it. These deaths also include those attributed to drone attacks, which tend to kill more people than the intended targets.

Finally Pak suffers ultimate insult: being made scapegoat for US failure in Afghanistan. A couple of thousand or so Haqqanis allegedly in Pak are supposed to be cause of why the most well-equipped mly force in history, 150k NATO troops + over 200k Afghan army could not succeed? https://t.co/ACmi72ZSKm

The Americans have conveniently built their bases in Afghanistan, where they operate from behind multiple layers of barbed wire and walls. Since the terrorists can’t make it to the US, the next best thing for them is to create chaos and destruction for its allies. Pakistan itself is a flimsy operation with too many moving parts and not enough glue, which has, over the past decade, had to deal with the fall out of the war in Afghanistan to boot.

Since 9/11, whenever Pakistan and the US have engaged, the US has constantly accused Pakistan of playing a double game. Be it Bush, Obama or Trump, all have accused Pakistan of being less than honest, and all of them have time and again blocked payments to Pakistan in the name of strategic leverage. Unfortunately, it seems like that is all the US can do – accuse Pakistan of playing a double game, and ask it to “do more”. In the other countries that the US is waging a war, it doesn’t have a scapegoat and thus can’t blame anyone else.

And now Pakistan being blamed for US failures in Afghanistan by an ignorant and ungrateful Donald Trump. https://t.co/Y4oh6OgnxC

We will eradicate extremism because it’s in our interest not because of what @realDonaldTrump says. We will not allow the #US to scapegoat #Pakistan for its own failures in the region.

As 2017 is also behind us, it is worth noting that white American men have been thus far more to blame for terror-related deaths in the West than any ragtag group scurrying around in Iraq or Afghanistan.

In conclusion, if President Trump feels that it is in the best interests of the US to belittle Pakistan and blame it for American shortcomings, then he should go ahead by all means. In return, this will only push Pakistan closer to China, which is already heavily investing in Pakistani infrastructure. As for its defence needs, Pakistan will be more than happy to spend its defence budget on Russian gear and more joint manufacturing ventures with China. The US will lose whatever logistical support its military has in Afghanistan, while Moscow will build military bases and Beijing will extend the China-Pakistan Economic Corridor (CPEC) and trade through Afghanistan.

Pakistan, at the same time, need not jump into a frenzy arranging emergency cabinet meetings and fretting over what the tweet means. A more mature political leadership would recognise that tweeting does not equate to policy statements. A less self-obsessed leadership would have taken backup measures against American volatility years ago, through regional alliances and by growing a backbone.

So far a level headed stance by Pakistani state and government to that man-child's rash outburst. Just don't let the usual reactionary idiots from our side to hijack the issue. For once, we are on the right side of history. We must stay the course.

If all else fails, the government can recruit the millions of internet trolls that dedicate their entire days and night trolling Imran Khan and Maryam Nawaz, and have them unleash their fury on Donald Trump. He responds better and faster to Twitter anyway.