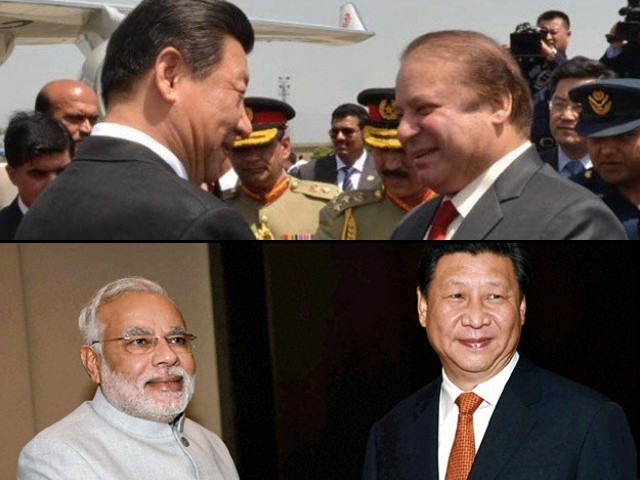 Pakistan does have the ability to safeguard its interests, identify and shun anti-state elements from among ourselves and defend against any foreign covert or overt aggression.

A mammoth $46 billion project, stretching over 3000 kilometres from Gwadar to Xinjiang, the China Pakistan Economic Corridor (CPEC) has the potential to make Pakistan’s economy grow by leaps and bounds.

The project that consists of construction and up gradation of roads, oil and gas pipelines, railway tracks and an international airport in Gwadar, promises to make Pakistan an economic power in the world, and Gwadar a trade and economic hub of the region.

But the CPEC does not promise wonders for just Pakistan; China stands to gain just as much, if not more, from this initiative. China will gain easier access to the Middle East and Africa, shorter routes and lesser costs will greatly benefit energy-importing China. A land-locked Western China will become economically vibrant, which would in turn bring development to the region and subsequently eliminate militancy and unrest caused by movements like Uyghur’s Xinjiang conflict.

The impact of CPEC would, however, be less obvious and visible on the already booming economy of China than on Pakistan’s struggling economy. While for China it is another project that adds to its status as an economic giant, for Pakistan it is the project that has the potential to put Pakistan on the track to a self-sustaining, stable and strong economy. No bilateral treaty in Pakistan’s 67-year history has benefited us more than what CPEC promises.

Naturally, this treaty has turned a lot of heads. And no country is more obsessed with Pakistan than India. India’s paranoia and lunacy-inducing obsession with Pakistan has found a new face under Mr Narendra Modi’s leadership. This obsession is not mutual. Our prime minister or leaders of the second and third largest party did not feel the urge to make remarks about India in their election campaigns. Our federal ministers and advisors have not, until very recently, commented on Indian Research and Analyses Wing’s (RAW) involvement in covert activities within our borders, as opposed to India blaming everything from a bombing to their prime minister’s bowel movement on our Inter Services Intelligence (ISI) for years.

Modi is very open about his nationalism and Hindu fanaticism, his security advisor is very blunt about his intentions towards Pakistan. Under Modi, India seems to have done away with subtleties and is now openly expressing its designs to further weaken Pakistan by all means necessary. Modi, behaving typically like a jealous toddler, has termed CPEC as “unacceptable” for India. He did so in his incredibly awkward, over-excited, selfie-inclusive, posing and proposing visit to China, but the Chinese president snubbed his unsolicited opinion like any prudent adult would snub the tantrum of a spoilt toddler.

Modi has now repeated his unsolicited opinion through one of his ministers.

It appears that Modi’s cabinet deliberated in length over its stance on CPEC. Of course, it was pre-decided that they would oppose it, but on what grounds? They couldn’t just say “because we say so” or “because we don’t want Pakistan to prosper”. Honest as these statements would be, they just wouldn’t be diplomatically correct. So the geniuses came with the stance that CPEC passes through Pakistan-held Kashmir, and since Kashmir is disputed, we cannot accept CPEC.

And they now wait, hoping this ludicrous stance would find an international audience. If you want to find Indian-supported local opponents to CPEC in Pakistan, look for an equally insane stance; some Baloch nationalists have spoken against CPEC on grounds that since it would bring heavy investment and development to the region, there will be consequent migrations from different parts of Pakistan, hence rights of Gwadar locals may be infringed.

India would not stop here though. China has already warned Pakistan of RAW’s intentions of sabotaging CPEC with help from local militants. Pakistan has only recently broken its decade’s old silence on RAW and India’s involvement in terrorist activities in Pakistan. India is, undoubtedly, our bitter rival.

Bitterness, undoubtedly, resides more in India than in Pakistan. It is natural in a way; Pakistan broke off from ‘mother India’, and no one can feel the pain of that disintegration more than a nationalist like Modi. After years of struggle, India got its atomic bomb and gloated over its strategic and military supremacy over Pakistan, only to be retorted by Pakistan’s very own nuclear weapon. It then satisfied its self with its economic supremacy over Pakistan and now CPEC stands to hamper that too. So India’s cry baby reaction is somewhat justified, not prudent, sane, reasonable or just, but somewhat justified.

Not to be ignored are the “other hostile agencies” mentioned in Chinese intelligence communiqué to Pakistan. While India looks jealously at Pakistan benefiting from CPEC, there is United States’ concern over the boost to Chinese economy and strategic access. RAW and Central Intelligence Agency (CIA) may work to disrupt and sabotage, and unfortunately they will find local help from purchasable entities and individuals from within Pakistan too.

But I have a feeling this project will go ahead and will be completed. Pakistan does have the ability to safeguard its interests, identify and shun anti-state elements from among ourselves and defend against any foreign covert or overt aggression. Pakistan will prosper and CPEC will play its due role in our progress, because we are more concerned about our prosperity than causing detriment to any of our neighbours.