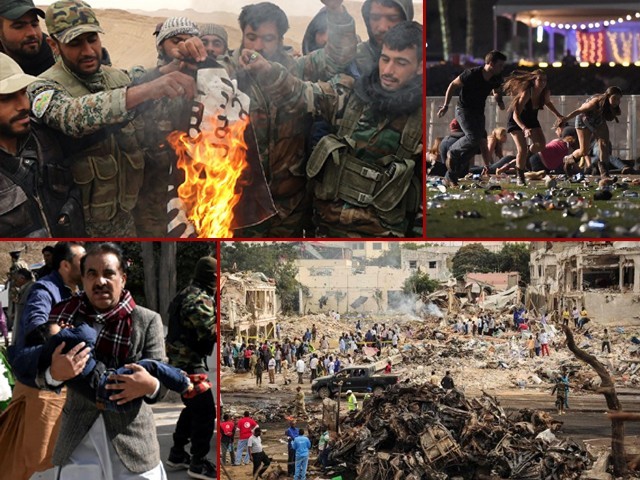 One certain consequence of this ‘rise’ in acts of terrorism is our evident desensitisation to blatant violence.

As we step over the threshold of one pandemonium of a year, it is evident that the global perspective is shifting, with many ‘rites of passage’ that were once the norm for transitioning from one year to the next with an outlook of optimism and hope, being replaced instead by realistic concerns over security and the need to secure borders.

Today, questions asked in hindsight and disconcerted glances exchanged in retrospect, all entail a fresh meaning. This is because as the year dissolves into its waning stretch, it is hard to ignore the events that made it, in many ways, the greatest yet challenging for global security, as we witnessed some of the most heinous acts of terrorism all across the globe. At a macro level, the holistic picture may not seem particularly different from that of previous years, especially since sporadic incidents and occasional fatalities have adeptly secured their place in how we now define ‘conventional’. A period of tranquillity is thus only the calm before the storm.

At the end of the year, we can say with certainty that the diaspora of terrorism has transformed it from a concentrated force to one of global potency. Leaders of the West could earlier afford to turn a blind eye to inexorable truths once upon a time, as the wars they started were limited to regions far away, allowing them to beat around the bush and divert public attention with their newfound populism. But those days are proven to have been short-lived; in fact, the potential to deal with foreign and domestic terrorism is now the primary constituent of the job description of presidents, and not to mention, of their populism.

The change in the epicentre of terrorism and the rise of volatile nationalism in the West can be understood further with a synopsis of recent incidents when violence reared its ugly head. In the West, the UK paid host to a string of attacks:

– In May, the unprecedented detonation of a shrapnel laden homemade bomb resulted in 22 casualties at the Manchester Arena.

– On June 3rd, eight people were killed on the London Bridge and in the nearby Borough Market, when three knifemen mowed down pedestrians, commencing in a killing spree.

– With the city still reeling, weeks later, a man named Darren Osborne, with a history of voicing hatred against Muslims, drove a van into a crowd of worshippers, killing one.

France, too, was not to be exonerated; a knife attack on a group of soldiers at the Louvre was followed by the killing of a policeman on the Champs Elysees, which coincidently came just days before the French presidential election.

A number of things can be ascertained from the aforementioned events. Firstly, the belief that all Muslims are terrorists by default is becoming more and more ludicrous by the day; an assumption that contributed considerably to a rise in terror this year, this time against Muslims. The ‘war’ on terror, quite an ironic statement on its own, has been misdirected towards the wrong enemy all along.

Reference to the same mistake can be found in history – in Vietnam to be precise. When US forces massacred between 347 and 504 unarmed civilians at My Lai, the targeted people were deemed as not human beings but mere pawns of a communist ideology. It was the use of weapons to eradicate an intangible system that brought them to the threshold of defeat. That is the reason what began as a pocket of insurgency has now become a worldwide fear by the name of the Islamic State (IS). Here we have one mistake stemming from another.

With populist rhetoric hurled at foreign communities, no heed is paid to hatred brewing within one’s own borders. Devin Kelley and Stephen Paddock, the Texas and Las Vegas shooters, had the privilege of being white and thus their crimes were separated from the groups they were part of. On the other hand, the millions of innocent people that constitute a religious group are clumped together and find themselves constantly in the limelight of terror.

In Europe, the large right-wing extremist group reaps the benefit of this diversion of focus. According to the Trump administration, Muslims need more vetting in order to protect the American people, while white men continue to roam free despite the actions of men like Dylann Roof. No wonder the rising number of shootings in America has lost the element of surprise.

On October 16th, the city of Mogadishu in Somalia, despite our view of the region as violence prone, was rocked by the worst incident in its record. Encompassing a truck laden with several hundred kilograms of military grade explosives, the scale of loss made it one of the most lethal acts anywhere in the world for years, with even the al Shabaab group not claiming responsibility for it – surprising, given its widening footprint in spreading violence in the region.

Similarly, the bomb and gun attack on a packed mosque in Egypt’s North Sinai province claimed the lives of over 300 worshippers, and exposed just how weak a grip the Egyptian state exercises on the area, and by extension, just how dangerous the territory is for the region. Sinai suffers from external interference and weak central control over borders, an atmosphere that consequently harbours extremism.

One certain consequence of this ‘rise’ in acts of terrorism is our evident desensitisation to blatant violence. Together with the loss of human life, this aspect of global terrorism has fostered a palpable sense of defeat. But then again, is emerging from such a year alive equivalent to emerging from the evils that plagued it?

On the other hand, the ‘superpowers’ of the contemporary world, by monopolising the world’s economy and politics, have extended their hegemony to security, thus unintentionally making a substantial difference while operating for their own vested interests. Russia took the opposition to the IS under its wing, as the United States’ recently dormant counter policy also worked in Moscow’s favour. As a result, that hope we are all harbouring these days that the IS might truly be approaching their demise might actually contain an element of reality.

With Iraq formally declaring an end to its battle against the extremist group, having driven it out of its territory, and with Bashar al Assad declaring that a similar end is near in Syria, the global opposition seems to have hit the final nail in the coffin of what was once a global nightmare. However, while congratulating her Iraqi counterpart, British Premier Theresa May, aptly reminded the world,

“We must be clear, however, that whilst the IS is failing, they are not yet defeated. They still pose a threat to Iraq, including from over the Syrian border.”

Pakistan is one state, amidst a handful of nations, which can muster a slightly better recollection of the year’s events. Despite another distressing year, with the attacks in Parachinar and Quetta still fresh on our minds, there is no doubt that the country has fared better than its own recent past.

The counter-terrorism action being taken against pockets through operations like Raddul Fasaad in the Federally Administered Tribal Areas (FATA) have yielded promising results, including a decline in violent incidents. Occasional incidents, while not ignored, are in reality mere reverberations and not of the magnitude of their precursors. There have been several reports that have established that terrorism-related violence in the country has deteriorated over the past year, recognising Pakistan’s success in eliminating anti-state actors from the tribal belt.

But then again, Pakistan wasn’t reported to be one of the most dangerous countries in the world for minorities for no reason. Pakistan was ranked fourth in a list of countries where persecution is the worst for Christians, and the recent suicide bombing at a Sunday church service in the Bethel Memorial Methodist Church in Quetta served as a herald of awakening for the state. The timing of the attack on the church, only days prior to Christmas, coupled with the fact that this was not the first attack against the Christian community, is a rude awakening to the collective conscience of the state.

“There could have been much greater casualties, but that is not the criterion that one should be judging on,” said Zahid Hussain, security analyst and journalist.

Not exactly the best end to the year.

Ambiguous as it is, the present characterisation of terrorism remains insufficient for any analysis to be carried out accurately, given how some acts of terror qualify as terrorism, while others do not, with religion seemingly being a deciding factor.  Yet, in hindsight, it can be said that while the world at large received perhaps a strange breather of sorts this year, the nonchalance of the West when it comes to looking inward has finally presented them a rude awakening.

Hope can often be a loose cannon, but it is nonetheless a preferable way to end the year. Here’s hoping that 2018 will be a better, and safer, year for us all.