As history proves, presidents will come and go, but Pakistan’s relationship with the US will always hang by a thread 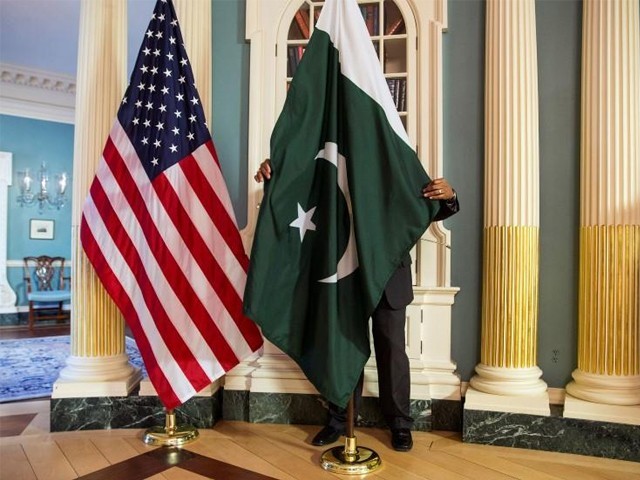 The relationship between the US and Pakistan today is the diplomatic equivalent of a miserable marriage, where neither partner is ready to divorce the other, yet there is persistent bickering.

By pitting two arched enemies against each other, President Trump aimed to draw greater favours from both countries – a policy tried and tested by his predecessors. Less than two months later, Pakistan miraculously rescued an American woman and her family from the Haqqani network, and President Trump tweeted his approval the very next day.

Starting to develop a much better relationship with Pakistan and its leaders. I want to thank them for their cooperation on many fronts.

The downward spiral of the US-Pakistan relations dramatically took an upward turn, but this is hardly comforting. We have been here before.

Phases of active cooperation, visits by delegations and strong promises raise hopes on both sides, and then something outrageously silly happens, tipping the scales, heralding a new round of the blame game.

When President Barack Obama assumed office in 2009, he was keen to refocus on the war in Afghanistan. He deployed more troops in the region and offered Pakistan more than $7 billion in civilian aid packages. He wanted to turn the Bush era, security driven, transactional relationship with Pakistan into a deeper strategic partnership by strengthening the civilian democracy in the country. His efforts, however, did not bear the fruits he desired.

In January 2011, Raymond Davis shot and killed two Pakistanis in Lahore. President Obama’s initial reluctance to admit that Davis was indeed a Central Intelligence Agency (CIA) agent, and his subsequent release, caused an outrage in the country.

The dust hadn’t settled yet when the US Navy Seals captured and killed Osama bin Laden in an Abbottabad compound. Bruised, angry and hurting, Pakistanis mulled over their country’s sovereignty. Islamabad hadn’t quite recovered from the fallout when North Atlantic Treaty Organisation (NATO) helicopters accidentally killed 24 Pakistani soldiers at Salala the same year.

Pakistan had had enough. It shut down the NATO supply line in protest.

It took eight months of going back and forth on negotiations, and finally, a formal apology from the Secretary of State, Hillary Clinton, for Pakistan to reopen the NATO supply line.

Pakistan’s denunciation of the American leadership reached a record low as nine out of 10 of its citizens (92%) expressed disapproval of President Obama’s presidency. Pakistan’s confidence in American presidents has historically stayed low. According to Pew Research Center’s Global Indicators Database, on average about 60% of Pakistanis have expressed no confidence in the US leadership, from President Bush to present.

The relationship hasn’t truly recovered yet. Pakistan, named a “major non-Nato ally” by President Bush, is consistently losing US favours. An already questionable US aid is fast plummeting due to Islamabad’s inability to satisfy Washington’s insatiable demand to “do more”.

Pakistan is wary of this demand. After losing over 80,000 people as a direct result of growing terrorism in the country post 9/11, and bearing losses of over $120 billion, a majority of Pakistanis suspect that the US has no real interest in the country’s development.

US suspicions are also whetted over Islamabad’s reluctance to deal with the Afghan Taliban and the Haqqani network. President Bush had suspected during his time in the Oval Office that Pakistan was either incapable or negligent about uprooting the Taliban from the region all together. He wrote in his memoire, Decision Points,

“Some in the Pakistani intelligence service, the ISI, retained close ties to Taliban officials. Others wanted an insurance policy in case America abandoned Afghanistan and India tried to gain influence there.”

Pakistan’s reluctance to control the influence of the Afghan Taliban stems from its nervousness over India’s presence in Afghanistan. During his visit to the US in 2010, General Pervez Musharraf said,

“If I’m allowed to be very, very frank, India’s role in Afghanistan is to create an anti-Pakistan Afghanistan. There are consulates in Kandahar and Jalalabad (which) are actually involved in creating trouble in Pakistan. They have no other role.”

And so, for President Trump to formally call upon India to strengthen its presence in Afghanistan, and strongly rebuke Pakistan’s inability to crack down on terrorism spawning within its territory, has considerably angered Islamabad.  The National Security Committee, in its rebuttal to the speech, blamed the US for failures in the war in Afghanistan, and declared,

“To scapegoat Pakistan will not help in stabilising Afghanistan. In fact, being its immediate neighbour, Pakistan has an abiding interest in peace and stability in Afghanistan.”

This, too, is a place where we have been before.

The US has historically used Pakistan’s antagonistic relationship with India to its advantage. Prior to 9/11, President Bill Clinton’s visit to India signalled warming ties with the country but Pakistan, with its new military government under Musharraf, was a virtual non-entity.

After months of uncertainty, the US announced that President Clinton would also visit Pakistan, though only for a few hours. A visit to India alone would have left Pakistan feeling snubbed. Musharraf allegedly secured the US state visit by guaranteeing President Clinton a live televised address to the nation. And so, in an unprecedented move, President Clinton addressed Pakistanis for 15 minutes, chastising the country for supporting insurgency in Indian-occupied Kashmir. There was nothing promising for an ordinary Pakistani. It was once again, a detached, impersonal, cold American president, scolding them to get their affairs in order.

Now, President Trump is reaching out to India in order to coerce Pakistan to behave. By deepening ties with India, the Trump administration also wants to counteract China’s growing influence in the region.

Pakistan, however, is also using its strong ties with Beijing to deflect unnecessary pressures from the US. More recently, it invited Washington’s wrath over the release of Hafiz Saeed – wanted by the US over masterminding numerous terrorist attacks, including the 2008 Mumbai attacks. Saeed has a $10 million reward on his head. But despite this, he announced, fresh out of detention, that his party Jamaat-ud-Dawa (JuD) will contest the next general elections in Pakistan. Talk about adding barrel loads of fuel to President Trump’s fire of Islamophobia.

When it comes to Muslims, President Trump isn’t exactly a fan. As a Muslim majority country, Pakistan closely watched his election campaign and is fully aware of him retweeting Islamophobic videos earlier this year. Most recently, Trump’s announcement to recognise Jerusalem as the capital of Israel created an uproar in Pakistan. So, after all this and more, even if he conjures a magic wand and miraculously strengthens American ties with Islamabad, President Trump would still stay a ‘he-who-cannot-be-trusted’ for a majority of Pakistanis.

The clock is ticking. The US Defence Secretary, James Mattis, on a recent visit to Islamabad, said he believes in finding a “common ground” for cooperation. Pakistan should seize the moment and redesign a proactive foreign policy for the region by collaborating with the US for some concrete confidence building measures.

There are only so many times that you can pass through the same point without realising that you are stuck in a maze, and a relationship as fractious as this can only take so many blows before it collapses all together.

A graduate from The Columbia Journalism School and a passionate visual artist. She is fascinated by Pakistan and curious about the world in general. She tweets as @sarah_alvi (twitter.com/sarah_alvi)

I stand with Junaid Jamshed

Are all Pakistani women damsels in distress?

Before blaming the Islamic Council, look at your own nikkahnama!