Can Pakistan ever be a minority-friendly country? 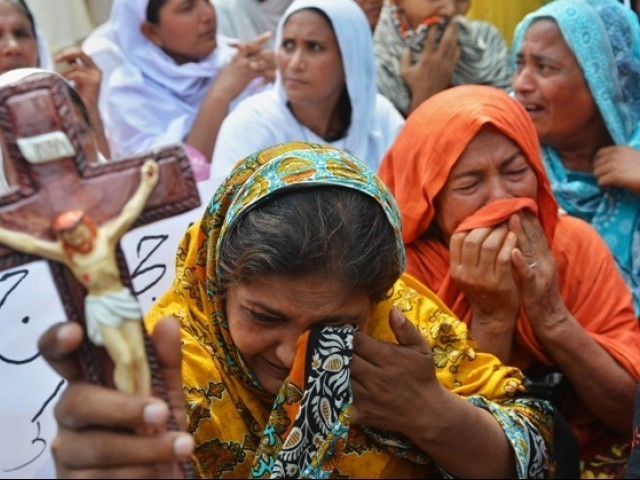 Pakistan ranks fourth on the list of the 50 countries where persecution is worst for Christians. PHOTO: AFP

Both January 11th news items were almost conjoined. Or like reading the mirror-written ecnalubma (mirror image of the word ‘ambulance’ written in front of ambulances) and getting it right as ambulance in the rear-view mirror.

The Guardian carried a report, titled ‘Christians in India increasingly under attack, study shows’, in which Pakistan ranks fourth on the list of the 50 countries where persecution is worst for Christians.

APP reported that Pakistan’s Prime Minister Nawaz Sharif reached out to minorities in a speech at the sacred 900-year-old Katas Raj Hindu temples in Pakistan where he said:

“The day is not far when Pakistan will be recognised as a ‘minorities-friendly country’ due to steps being undertaken to better the lives of minority groups.”

The prime minister’s “minorities-friendly” assurance is neither a promise nor mere verbiage, but a declaration of intent. He can initiate the process but cannot control its timetable or its success measured by expectations.

Pakistan is not minority-unfriendly due to a legislative void. The challenge comes from hearts and minds. The success or failure of passing laws often depends on the quality of the backroom deal-making. Alas, hearts and minds are even slipperier than veteran lawmakers and immune to wheeling and dealing. Yet, the prime minister’s attempt to seek virtue for himself and his constituents is laudable. Had Abraham Lincoln not issued the Emancipation Proclamation in 1863, the Fifth Circuit Court, in United States versus Jefferson County Board of Education, would not have been able to order school districts to end segregation in 1966.

It is not enough to say that the enlightened speech was intended to encourage Modi’s negotiators to a samosa party around a glistening negotiating table. These words will impact closer to home, with perhaps unforeseen consequences.

The prime minister’s optimistic locution might not affect Pakistan’s standing as the fourth most dangerous country for a Christian minority, but it will raise the expectations of all minorities. It will also provoke anger among those segments of the majority who feel that such recognition is a betrayal. Not only the prime minister but the minorities themselves will be exposed to that periodic, lethal rage.

But then politics carries its perils, while being a minority in Pakistan can be even trickier. And although the road to hell is paved with good intentions, one hopes for an exception.

Terrorist attacks have, no doubt, indiscriminatingly targeted all communities in Pakistan, regardless of their numerical status. However, non-political attacks in the form of vigilantism and riots have tarnished the very meaning of Pakistan. History measures the greatness of individuals and civilisations in their treatment of minorities, and if the prime minister’s words are not followed by deeds, the verdict will be harsh.

Pakistan has already lost 70 years of the century that passed between Lincoln’s Emancipation Proclamation and the start of its de facto application. Yet, if the government starts issuing a spate of hasty affirmative action directives for communities that are ill-equipped to respond to them, the situation will only worsen. Lowering standards to affect credibility by accommodating sub-standard minority candidates weakens all communities and fosters inter-communal friction. Despite a head start, India still has to confront riots and self-immolations from minority and majority communities.

The greatest obstacle to retrieving alienated minorities and bringing them into the mainstream is in the hearts and minds. The real battleground is in classrooms to change mind-sets and make minority candidates proficient enough to avail equal opportunity. Affirmative action should be negotiated with community leaders as a privilege of limited, though renewable duration. Otherwise, noble intentions risk spawning a breeding ground of abuse with minority community puppets fronting for ‘minority-contract’ hustlers, further deteriorating their struggling communities.

While the career-nursing pundits of education bicker over textbook content, there is a smouldering issue, extinguishing which can also serve as a litmus test for the prime minister’s intentions and soothe uneasy hearts.

Three Christian members of the Punjab Legislative Assembly cast the crucial vote for the judicial creation of Pakistan, asking that Christians be added to the Muslim population. On November 19, 1942, at a reception in Loring Hotel in Lahore in the presence of Miss Fatima Jinnah, Sir Sikandar Hayat Khan and the Nawab of Mamdot, Jinnah said,

“We will never forget your favour…”

Samson Simon Sharaf in one of his columns, ‘Christian IDPs of Pakistan’, and Sama Faruqi and Asif Aqeel in their in-depth article, Caste away: The on-going struggle of Punjabi Christians, have also brought the issue into focus.

The newly created state of Pakistan promised Christians a 5% quota in government and semi government jobs and admissions into higher and professional academic institutions. Seventy-one Punjab Battalion, a regiment of Christians, was to be resurrected and farms in 12-acre holdings abandoned by fleeing Sikh landowners were to be distributed to their Christian farm labourers. Christians have been patiently waiting for 70 years and perhaps the prime minister finally intends to fulfil these promises as redress of grievances with compensation for the delay. The legal maxim of ‘justice delayed is justice denied’ is a universally known lament.

It is hoped that if they do materialise, the land grants will not be a farce in areas where they encroach on existing communities and create a security situation, that they will be fertile and under irrigation, and that their qabza (possession) will be ensured by the local authorities.

It would also be good to remember that when, after Partition, these farm labourers were divested of their ancestral profession; they congregated in urban areas where they were channelled into sanitary work. After 70 years, their descendants have lost their farming skills. Offering them a 12-acre parcel of land would be a cruel joke. Either they should be offered farming courses or another form of compensation in property — not cash, because as is, unfortunately, the wont of ghettoised communities, that could go quickly, leaving them worse off.

If that happens, no mirror in the world will be able to flip ‘ecnalubma’ into ‘ambulance’.