How Islamic is the ISIS? 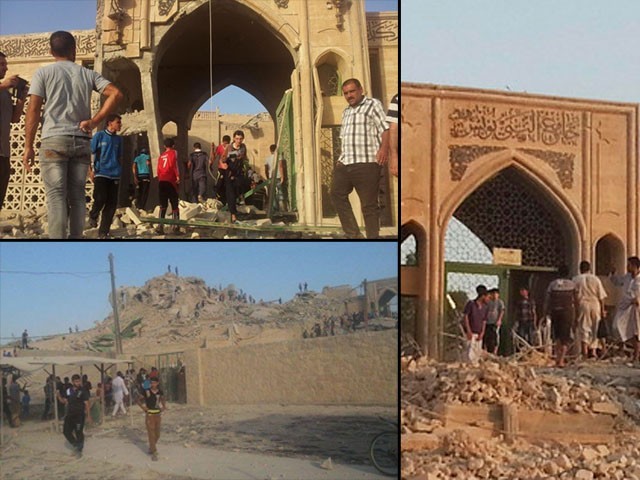 Different pictures of Prophet Younus's (AS) shrine in Iraq that was destroyed by the Islamic State.

A recent news story left me utterly shocked and angry. Yesterday, the Islamic State (formerly known as the ISIS), a militant outfit, blew up and levelled one of the most well known and revered shrines in Mosul, Iraq – the resting place of Prophet Younus (AS). The militants blew up the shrine in front of a large number of people.

The Islamic State (IS) has razed 15 mosques so far, belonging to both Sunni and Shia sects and, interestingly, this recent destruction of Prophet Younus’s (AS) shrine was done under the supervision of a proclaimed ‘caliph’.

In the middle of all this chaos, my questions are simple.

What sort of a caliphate is this that believes in annihilating our prophets’ resting places?

Is this what Islam preaches?

What twisted version of Islam does the ISIS follow when it blows up holy places and destroys nearly 30 shrines?

It is all beyond my understanding.

The IS aims to bring forward an anti-western political doctrine. Following a hard-lined extremist ideology, similar to that of the al Qaeda, and complying with the global jihadist principles, it is determined to establish an Islamic state of its own that will follow radical religious interpretation as deemed fit by the IS. Due to the sheer brutality of the IS, al Qaeda severed all ties with the rogue establishment in 2014.

After the joint militant rebellion in Syria halted, mainly due to inter-militant fights, the then so-called ISIS faced intense opposition from its allies, mainly al Nusra and the free Syrian army; limiting the ISIS’s control only to the borders of Syria.

In the beginning of April 2013, however, the ISIS militia made a fierce comeback, subjugating large parts of northern Syria, affecting the Syrian Observatory for Human Rights to an extent that they labelled the ISIS the strongest militant group in the country. Not only Syria, the bloody group left its mark in Turkey as well, carrying out the deadliest act of terrorism ever to take place on Turkish soil.

Now the ISIS exploited the weakness of the Iraqi army and was quick to occupy Iraq’s northern lands. Call it the incompetency of the Iraqi civilian government or the corruption rampant amongst Iraqi Army generals, but the bottom line is, Iraq fell prey to such a group due to its executives’ ineptness. The prime minister as well as different influential clerics urged the nation to take up arms against the outfit, causing severe civilian unrest, allowing critics to label this a major failure on the governments’ part.

ISIS was on the rise, though they were unable to reach Baghdad, they conquered enough to call their occupied land an independent state, the Islamic state, and create a self-proclaimed caliphate of their own. But if the ISIS was a true representative of Islamic ideology, it would’ve been enraged at the atrocities being committed in Gaza. It would have confronted the Zionists to free Palestine from their occupation. Yet they remain silent.

The Gaza issue seems to have preoccupied Pakistani minds but what our people seem to have forgotten is that they are still being targeted – every now and then – not by the Jews but by radical Muslim militants. Are we so naïve that are willing to ignore the constant threat that lingers around us? Has our emotions overridden our rationale? Yes, Israel’s violation of human rights in Palestine should be strongly condemned, but is it not more important to save your land first so that you may be in a position to help those in need?

Pakistan is already infected with the disease of terrorism; the Taliban, al Qaeda, Jundullah, all operate here. With the operation, the Pakistani government has taken a bold step to fight the insurgency, but this is happening without an effective strategy to deal with the internally displaced people. The Pakistani army might be able to carry out the operation successfully, but the question is, is extremist insurgency the result of only a group of wild, militarily trained, blood thirsty individuals or is it the result of a provocative ideology? An ideology so powerful it promises the establishment utopia once the motives are fulfilled? This ideology aims to establish the promised land of Khorasan, the land which, when established, will mark the beginning of the supposed Islamic glory.

In recent years, al Qaeda has become weaker and the Pakistani Taliban has been disowned by the Afghan Taliban, but does this make our work any easier? Are we finally moving towards the end of extremism in this region? Even if this holds true, the rise of the ISIS poses a big threat to these ideas.

The Pakistani government’s inactive response to foreign militants has allowed them to grow, spread their views and expand their ideologies within the country. So much so, that they’ve been able to make a state within a state in the tribal areas of Pakistan, questioning and successfully undermining the government’s writ and authority in those regions.

Even as the military counteraction is in progress, the success of the ISIS can serve as a motivational boost to the militants fighting the army. Tensions between the al Qaeda and ISIS seem to be of a temporary nature. Sooner or later, the socio-political narrative that influences both these groups will cause them to reconcile their positions, and a unified al Qaeda-ISIS with a common agenda is a horrifying thought indeed.

As Pakistan has seen itself, militants do develop alliances with other militant groups to serve a joint purpose. The rise of the ISIS can serve as inspiration for militant groups or even stimulate them to form an alliance. The militias in Pakistan can serve as an ally of the ISIS and unless it is stopped, it won’t be long before the ISIS comes around knocking on Pakistan’s door – and eventually breaking it down.

Government think tanks have to come up with ways to limit the spread of extremist narratives within the country. This malignant ideology has to be resisted, uprooted and removed. Islam is way more broad-minded and progressive, even in its fundamentals, than portrayed by these militant groups.

The misconception, misinterpretation, misplacement or rather cherry picking of religious narratives out of their contexts by pseudo-ulemas have dented the true Islamic ideology as a whole. Pakistan, as a people, has become a confused lot due to which people are unable to speak out against these militant outfits with full certainty. The masses still seem to have a soft corner for these outfits because of the manipulative facade they have disseminated; the facade that they are reviving and spreading Islam. The Islam they plan to ‘revive’ has little resemblance to the actual religion.

The government’s challenge is to provide the nation with a clear narrative, explain to them the dangers caused by these militant groups to our existence as a progressive nation and urge them to stand united against them.

An A-levels student and an active social commentator. He dabbles in debate competitions, blog writings and sports. He blogs at www.fazalgilani.com and tweets as @ATNaqvi (twitter.com/ATNaqvi)

Of misogynistic jihadists and their sexual jihad