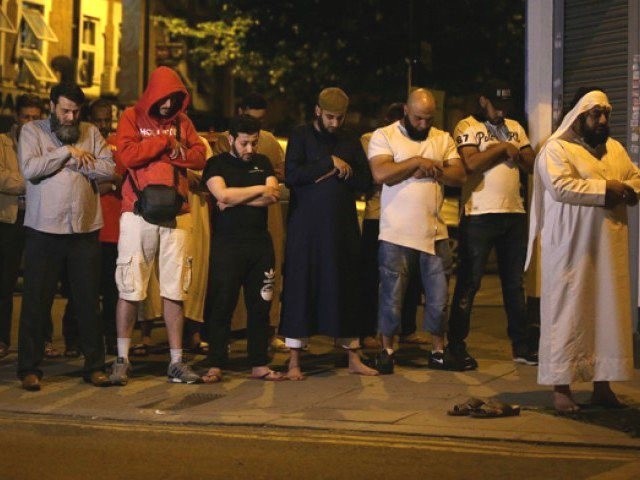 On Monday, as the clock struck midnight, Darren Osborne, a 47-year-old from Cardiff, drove a rented white van over innocent people outside Finsbury Park Mosque in London. Eleven innocent people were injured while one succumbed to injuries. Onlookers recalled Osborne shouting,

“I want to kill all Muslims.”

Why did he commit this act? What were his motives? What does he want?

I suppose we will find out more over time, though one thing is for sure – as much as this attack is against Muslims, it is also an attack against London.

I’m glad each and every political figure condemned this attack, regardless of the attacker’s religious affiliation. Theresa May called it “sickening” and Jeremy Corbyn said,

What was heartening though was how leaders from various faiths were quick to show their support and solidarity for the victims; they condemned this attack and vigils were held as well. In a time of crisis, solidarity and commitment towards victims play an important moral role.

Personally, I have never felt threatened in London and this incident does not change that. Having lived in London for over a decade now, I have fortunately never been a victim of an Islamophobic remark or comment.

But I live in Newham, the most diverse part of London with almost 83% non-white residents and my experience may not represent everyone’s experience. My experience of London is different from a woman in a hijab or from those living in other parts of the UK.

The Finsbury Park incident should not be treated as an isolated incident. Rather, it should be perceived in a broader context, along with other Islamophobic attacks, which have increased in number over time.

Data compiled by Measuring Anti-Muslim Attacks (MAMA) shows that a mosque or Muslim place of worship has been attacked every two weeks since 2013. This includes vandalism, ‘violent extremism’, hate mail, and more.

With the rise of the far-right and ultra nationalist parties such as the British National Party (BNP), English Defence League, Britain First, such incidents peaked to 46 in 2013, which coincides with the murder of Lee Rigby. Over time, the far-right parties have been rejected and luckily, the number of incidents decreased to 12 in 2016.

The ravines of hate speech have not halted, but only changed course. They’ve just taken on a different form. What worries me, and a majority of Muslims on a daily basis, are the Islamophobic headlines in widely read newspapers such as Daily Mail, Daily Express and The Sun. They only act as fodder for individuals like Osborne. If such brazen headlines were directed towards any other community, I can assure you they would be deemed highly unacceptable and media outlets would be reprimanded for their actions, but alas, this is the Muslim community in question here.

The media’s biased attitude towards Muslims doesn’t end there though.

For years, Katie Hopkins, famous for her role on The Apprentice and Good Morning Britain, has continued to spurt Islamophobic comments either in her column or her widely followed Twitter account. Last year, she called refugees “cockroaches”. A couple of months ago, after a man was detained near Whitehall in London, Hopkins tweeted,

“Explosion in France, shooting at a German hospital, knife attack in London. And Ramazan has not yet begun. Without food, these sods get nasty.”

And after the Manchester bombing she tweeted,

22 dead – number rising. Schofield. Don't you even dare. Do not be part of the problem. We need a true solution. #ManchesterArena

Her tweet was eerily reminiscent of the ‘final solution’, a term used by Nazis during the Holocaust. Luckily, Leading Britain’s Conversation (LBC) fired Hopkins right after this tweet.

Until a few years ago, individuals who would say such things would be considered outright racist and Islamophobic without a doubt. Now, Muslim bashing has become normal public discourse. It shouldn’t be this easy for people with power to be able to afflict the weak. After the London Bridge attack earlier this month, the anti-Muslim hate crimes increased five-fold.

Finsbury Park as a violent act does not worry me. Events such as these can be stopped with improved security. What I find dangerous though is Finsbury Park as another Islamophobic attack. To halt it, legal, political and social policy changes are required.

Islamophobia should be classed in the same bracket as anti-semitism and racism. There should be structural and institutional support systems for people, not just for Muslims but for all minorities.

After the Manchester bombing, Robert Fisk, a respected journalist and the correspondent for The Independent wrote that we should look towards the past, not at the Islamic State (IS), in order to see true meaning of Islam.

Julie Simpson, an old woman from Ilford, east London travelled all the way to Finsbury Park on her mobility scooter to apologise to the mosque imam, stating,

“My friend, I’m so sorry, I’m so sorry for this. I am. I came here because the people who did this aren’t English. They aren’t Christian, they’re animals, they’re pigs. Muslim, English, in the Quran and the Bible, it says love your brother like you would love yourself. Would you do that to your brother? Please say sorry to the family. It rips my heart out, it literally rips my heart out.”

Woman apologizes to hero imam for Finsbury mosque attack A woman who visited Finsbury Park mosque to apologize to its imam for Monday’s attack, which left one person dead and 11 injured, told RT that people who carry out such attacks are no better than “animals.”Julie Simpson, from Ilford, east London, told RT correspondent Eisa Ali: “I came here because people who have done this are not English. They are not Christian… they are animals, they are pigs.”Simpson met the imam, Mohammed Mahmoud, to show her support for the family of the man killed, and handed over an envelope of money.“I’m so sorry, I’m so sorry for this, I am,” she told the imam. “It rips my heart out. It literally rips my heart out. I came all the way from Ilford, just to see you, to say I am so, so sorry.”She added: “I was crying, I was crying all the time, I thought to myself: What could I do? I can’t do nothing.”The imam, who has been praised as a “hero” after he stepped in to protect the suspected attacker Darren Osborne from an angry mob, said Simpson didn’t need to apologize for the terrorist who committed the attack.“You don’t have to apologize because this criminal doesn’t represent you and he doesn’t represent Britain.“They’re a fringe group of criminals and extremists, likewise ISIS [Islamic State], they don’t represent Muslims, these people don’t represent Brits. And we’re part of Britain, too,” he added.

For those who don’t want to search the past for inspiration, for now look at Mohammed Mahmoud, the Imam at Muslim Welfare House, who protected Osborne from the crowd and you’ll find your answer.

The writer is an independent researcher with a masters degree in Political Economy of Late Development from London School of Economics. He resides in London.

As a South Asian living in the UK, my vote goes to Jeremy Corbyn