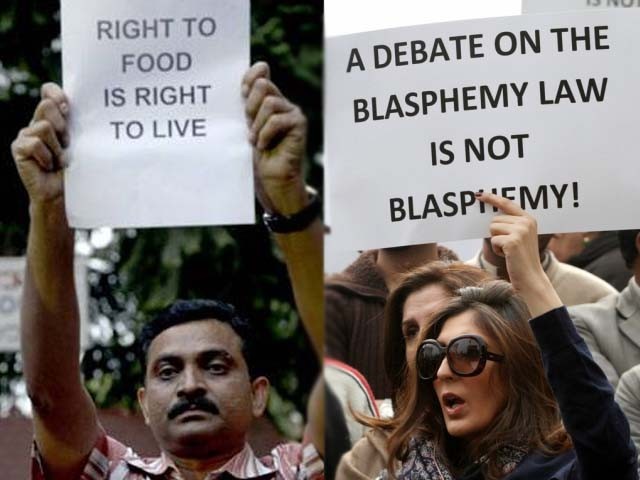 It seems that this malaise has transformed and metastasised into a cancer that is permeating the very fabric of each nations’ respective society.

The issue of cow slaughter and the consumption of beef has been an issue that many orthodox Hindus have found an affront to their religion. Blasphemous speech, in regards to orthodox Muslims and their reverence for the Prophet (pbuh) and Allah (swt), produces a similar sentiment of outrage.

This sense of outrage has led to the phenomenon of religious vigilantism. Yet, it seems that this malaise, which was once a rare occurrence in the early history of both India and Pakistan, has transformed and metastasised into a cancer that is permeating the very fabric of each nations’ respective society.

In 1986, Pakistan, under the brutal dictatorship of Ziaul Haq, witnessed the institutionalisation of blasphemy laws that the nation inherited from the British penal code. The original law, Section 295, was originally instituted as a means of preventing communal violence during the time of the British Raj.

The law stated that “deliberate and malicious acts intended to outrage religious feelings of any class by insulting its religious belief” is deemed a criminal offence. Pakistan, before the institutionalisation of blasphemy, saw only rare occurrences of this law being applied in the court of law. Records indicate that before 1986, only 14 cases were ever filed over allegations of blasphemy. The number of cases filed, from 1986-2015, jumped to 1,472.

This uptick in cases filed has also been accompanied by a series of assassinations and murders, the persecution of religious minorities (Ahmadis, Shia, Christians), the intimidation and targeting of proponents who want to amend the law, and ironically, fellow innocent Muslims.

India, since the days of the British Raj, has heard demands from orthodox Hindu sects that propagate the imposition of bans on cow slaughter and beef consumption. The impetus behind this stance is due to the cow’s culturally sacred status in Hinduism.

The reverence for the cow is also enshrined within India’s secular Constitution, through Article 48, that exclusively allows Indian states the ability to ban or allow the slaughter of cows. The Article specifically states that:

“The state shall endeavour to organise agriculture and animal husbandry on modern and scientific lines and shall, in particular, take steps for preserving and improving the breeds, and prohibiting the slaughter, of cows and calves and other milch and draught cattle.”

As of 2016, only five out of 29 Indian states allow cow slaughter and beef consumption. Yet, these laws were rarely enforced. Historically, the issue of cow slaughter in India has only been truly contentious within circles of ultra-orthodox Hindus, whose views of strict enforcement have usually been restricted to the fringes of Indian society.

The proponents of instituting and imposing bans on cow slaughter and beef consumption call themselves gau rakshaks (cow protectors) but can easily be viewed as religious vigilantes. The actions of these vigilante groups have either resulted in the beatings or murder of those, either guilty or innocent, viewed as having killed a cow or consumed beef. The rise of the religiously inclined Bharatiya Janata Party (BJP), under recent leadership, has only strengthened the position of gau rakshaks.

In the name of God

The contentious issue of cow slaughter in India and blasphemy in Pakistan share many parallels. Recent acts of vigilante justice in both nations are perceived as justified through legislation that reaffirms their legality.

In Pakistan, the ruling Pakistan Muslim League-Nawaz (PML-N) government and parts of the judiciary provide a sense of legitimacy for the string of recent violent actions that go against the predominant religion. Official statements condemning blasphemous content on social media, made by Prime Minister Nawaz Sharif and Islamabad High Court Justice Shaukat Siddiqui, further lend a cover of justification to those who viciously target individuals accused of blasphemy. But most importantly, they provide an alternative method of silencing dissent.

The most recent episode of violence perpetrated in the name of defending Islam targeted a university student, Mashal Khan, who supposedly posted blasphemous content on social media. A brutal recording of vigilante “justice” appeared last week that showed a crowd beating, stripping naked, killing, and then tossing the body of the student off a second floor dormitory in the name of religion.

This horrific event shares its place in the nation’s psyche along with the assassination of former Punjab governor Salman Taseer, the witch-hunt against Asia Bibi, and a multitude of other victims that have fallen to the curse of being labelled a blasphemer.

India, often viewed as a foil to Pakistan, has had a long history of secularism entrenched within society. Yet recent decisions by the BJP-led central and state governments, and the tepid response by those in power towards acts of vigilante justice, further strengthens the position of those that lynch in the name of their religion.

The appointment of Yogi Adityanath as the chief minister of the largest state in India, Uttar Pradesh (UP), has further fuelled the fracturing of India’s secular civil society. He, along with various other BJP party members, have made past comments that have targeted the family of Mohammad Akhlaq (who was lynched under the suspicion of possessing beef), Dalits who have been accused of cow slaughter as they dispose recently deceased cattle, and other minority groups.

CM Adityanath, shortly after gaining office, advocated for enforcing the ban on both cow smuggling and slaughterhouses and has a record of rarely making remarks that condemn actions of vigilante justice. Shortly after his appointment as UP CM, reports of arson were submitted against three shops that sold meat.

On April 5, 2017, a 200-member gau rakshak mob attacked a convoy of cattle transporters in India’s state of Rajasthan. The mob surrounded the vehicles and beat the drivers, who happened to be Muslim, leading to the death of Pehlu Khan who succumbed to his injuries.

Incredibly, the state has filed charges and arrested the 11 men on charges of cow smuggling, which is illegal in Rajasthan. Charges have also been filed against Khan’s family, who argue that the cows were not being transported for slaughter but for dairy production.

They also stated that the necessary paperwork was also available as transportation of cattle requires a permit. The police have also begun a murder investigation into the group of gau rakshaks, but so far no arrests have been made.

“There are two sides to this… They know that one cannot smuggle cows out of Rajasthan. A law is in place… Stopping is not a crime… But taking the law into your hands that is a crime.”

It seems that the minister finds the transportation of cows equivalent to the actions perpetrated by the mob.

In Pakistan, following the murder of Mashal Khan, statements by top political party officials from the Pakistan Tehreek-e-Insaf (PTI), Pakistan Peoples Party (PPP), and PML-N all condemned the murder of the student, but there was no mention regarding the concept of blasphemy that was at the root of the controversy. The fear within Pakistani society regarding blasphemy continues to reach new heights. It is now understood that the very criticism of the nation’s blasphemy laws now amounts to having committed the very act of blasphemy.

“Where has the central government been as all of this has been happening? Initially, it did not condemn cow vigilantism. India’s social justice minister, whose principal responsibility is to promote the welfare of [Indians], expressed regret not for the vigilantes’ violent actions, but for the fact that they were spurred by ill-founded rumours.

This view was reflected in the government’s response to an attack in UP, where a mob lynched a Muslim and beat his son nearly to death; simply because they suspected that he had killed a cow. Rather than leaping to the victims’ defence, the authorities launched a forensic investigation into whether the meat in his refrigerator was beef (it was not). The implication was clear: violence is unjustifiable only if the victim has not actually killed or eaten a cow.”

The same can be said of the authorities across the border in Pakistan. Following the brutal and inexcusable murder of Mashal Khan, early reports stated that,

“Police in Pakistan’s north-western Khyber-Pakhtunkhwa (K-P) province today said there was no concrete evidence yet to register a blasphemy case against Mashal Khan who was lynched by a violent mob, as it arrested 22 people and opened a hate speech probe against two clerics in the case. We did not find any concrete evidence under which an investigation or legal action can be launched against Mashal, Abdullah or Zubair,” Inspector General of Police Salahuddin Khan Mehsud told reporters at a press conference here.”

If these actions are not indicative of a madness gripping the subcontinent, then we must redefine sanity.

The author works as a researcher at the South Asia Program at Hudson Institute in Washington DC.

Is Afghanistan side-lining the US for its alliance with Russia, Pakistan and China?

Why nobody wants to help Myanmar’s unwanted Rohingya