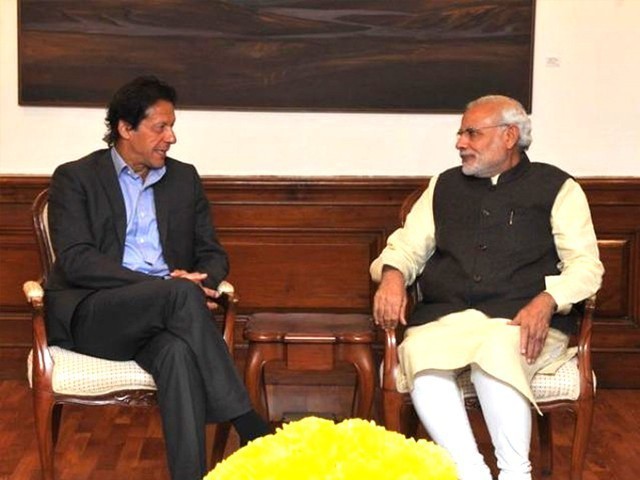 The BJP is always in election mode, and there is much the PTI could learn from the BJP. PHOTO: TWITTER/ MEA INDIA

For many, the two-nation theory (TNT) is a matter of history rather than a contemporary and ongoing political phenomenon. If the plebiscite demanded by the United Nations Security Council Resolution 47 was implemented, if Pakistan was not facing hostile provocations from India and its allies in Kabul, if India was at peace with itself in terms of ending communal violence, if India was not pitting Iran against Pakistan, and if Bangladesh and Pakistan had healthy relations, then perhaps the TNT could be viewed as an historical accomplishment.

Because the aforementioned issues are far from being solved, and moreover, due to the fact that these issues and their antecedents helped lay the foundations of the TNT, it is very much alive as a contemporary political reality.

At its most fundamental level, the TNT came about because it became clear that within the anti-colonial movement, there were too many who saw the future of a post-British South Asia not as an opportunity to create a new country forged on the basis of economic sovereignty and political self-determination, but instead one that would represent a Hindutva empire. The aim was to consolidate political and social supremacy, not only of the internal Hindu caste system but of a pseudo caste system in which Muslims in particular would be targeted as third class citizens, or worse.

The 1947 Jammu massacre of Muslims lead by the Rashtriya Swayamsevak Sangh (RSS) spilled the blood which ultimately authored a conclusive chapter in the TNT.

Today, the Modi government displays no embarrassment about its associations with the RSS, which is equally responsible for the ethnic cleansing of Muslims in Jammu as it is for the assassination of  Mahatma Gandhi. Instead, the Bharatiya Janata Party (BJP) has become even bolder in its assertions that India ought to be ruled on the basis of ‘Hindu first’, and according to some BJP politicians, ‘Hindu only’.

In such a regional environment, Pakistan would be negligent if it did not internally promote the TNT as a contemporary political issue that justifies Pakistan’s existence, development and cohesion as a place of national salvation for Muslims, who would have otherwise faced the perils that many of today’s BJP devotees see as ‘opportunities’.

To ignore or debase the importance of the TNT as a contemporary political tool to promote Pakistani patriotism would be a great folly for a country that must play up rather than play down the compelling story of its foundation.

The BJP is more than a party – it is a movement

Newton’s third law states that in the world of physics, every action has an equal and opposite reaction. The same applies to politics and society. One of the factors behind the BJP’s landslide is the fact that it is a social movement, an online movement and even a psychological movement. Many in the BJP themselves would say that the party is something of a spiritual movement.

If one wonders why Modi’s shoddy economic record and rather ignominious foreign policy record did nothing to stop the BJP from ploughing ahead to victory, one must realise that for millions in India, the BJP is a matter of personal and collective identity. Modi himself has been masterful at ingraining this tendency among his core constituents. This in turn has stopped millions of people from making an otherwise pragmatic political assessment during a lengthy election season.

It is little wonder why such an all-encompassing social phenomenon that happens to also be a political party so easily beat Congress, a party that ran an abysmally bland and unoriginal campaign.

For Pakistan, the lesson is clear. While the Pakistan Muslim League-Nawaz (PML-N) and the Pakistan Peoples Party (PPP) represent two legacy parties whose lack of originality could rival that of Congress next door, the Pakistan Tehreek-e-Insaf (PTI) has, if anything, lost momentum as a social movement since forming its first national government last year.

One of the reasons why, after many years of setbacks, PTI won its first General Election in 2018 is due to the fact that the charismatic Imran Khan built a popular movement that resonated in the hearts and minds of people, beyond the traditional systems of blind patronage that traditionally dominated Pakistan’s democratic process.

Since entering power however, while PTI remains head and shoulders above the opposition, it has lost some of the dynamism it had during the 2018 Election. The danger is that PTI’s officials and assembly members could grow complacent whilst in power and lose the vigour it had whilst in opposition.

Here, PTI could learn much from the BJP. The BJP is always in election mode, insofar as it is always proffering new ideas, is always ready to mercilessly criticise its opponents, is always thinking big and constantly mobilising the masses, even years before an election.

Forgetting the BJP’s vulgar and extreme context, its context as a behemoth social movement can be adapted by PTI as a means of making ordinary Pakistanis believe in politics, not just during an election season but throughout the years.

A wise man can learn far more from his opponents than his well-wishers, and as such, PTI would be wise to learn how the BJP has gone from what decades ago was something of a fringe movement, to what is now the natural party of government in India.

The BJP has been very successful at having it both ways when it comes to thinking globally. Because of India’s immensity, India’s public is often unaware of trends outside of South Asia. This is not necessarily a unique phenomenon with respect to India, as many in the large United States also exhibit the same symptoms of a parochial geopolitical consciousness in spite of America’s substantially higher living standards.

And yet in spite of this – perhaps because of this – the BJP has managed to promote a duel track system of foreign policy where it presents one image of India abroad and a very different narrative at home.

For foreigners, the BJP has brilliantly promoted an image of India as a state of purity, economic strength and social harmony. By contrast, the domestically aimed mass media is filled with the most virulent forms foreign policy extremism aimed at both Pakistan and China.

By contrast, Pakistani mass media does little other than attack Pakistan and Pakistanis in a cheap point scoring game that may well have won an individual popularity in the mess hall of a western university, but apart from that, such behaviour deeply undermines the nation.

Pakistan must learn to assert a national narrative to the outside world that makes the country more attractive, not just to investors and tourists but to individuals, who can then lobby their governments to engage in more fraternal relations with Pakistan.

Throughout the western world in particular, whenever one wants to talk about good relations with large Asian countries, India is typically at the tip of such tongues. This is a result of the fact that due to its lack of development vis-a-vis China, chauvinistic westerners are not threatened by India the way they are by China. But more importantly, this is due to India presenting itself as that which is necessarily attractive to the open-minded yet non-critically thinking foreigner.

Pakistan must begin to do the same when it comes to promoting a self-confident image designed for foreign consumption. Thus, even if Pakistani mass media insists on a self-deprecating style of ‘journalism’ at home, it must not allow this to cloud the narrative that Pakistan presents to the rest of the world.

One of the BJP’s most attractive points, both to its supporters and to objective observers, is that it is a party of anti-intellectualism.

Just as sure as the communist countries of Europe became stagnant due to a brooding and lugubrious atmosphere of theoretical politics dominated by a greedy intelligentsia, Pakistan’s political atmosphere is dominated by something even worse – a pseudo-intellectualist cabal. This cabal believes that spouting some myopic theory from a 50-year-old American or British text book is more important than actual patriotism, economic pragmatism or support for state institutions.

While much of the BJP’s ‘men of action’ rhetoric is little more than Bollywood fantasy, it is at least a fantasy that is healthy for the nation. The BJP has convinced people that India is the greatest country in the history of the world, while Pakistan’s pseudo-intelligentsia spend night and day convincing themselves that Pakistan is somehow the worst country in the world.

A healthy Pakistani political system is ultimately one that decries intellectualism as the BJP does, but without foregoing objective problem solving as a means of justifying and ultimately backing straightforward motivational rhetoric.

While opposition supporters in India would disagree, India is the BJP in many respects. At a time when Pakistan continues to be at war with aggressors on all sides, PTI must become something more than just another political party; it must become a movement. If the BJP’s consolidation of power cannot inspire much needed change in Pakistan, it means that Modi has not only won the Indian election, he has also won the next Pakistani election.