Calling my rapist my ‘brother’: why the ‘sister card’ reinforces the rape culture 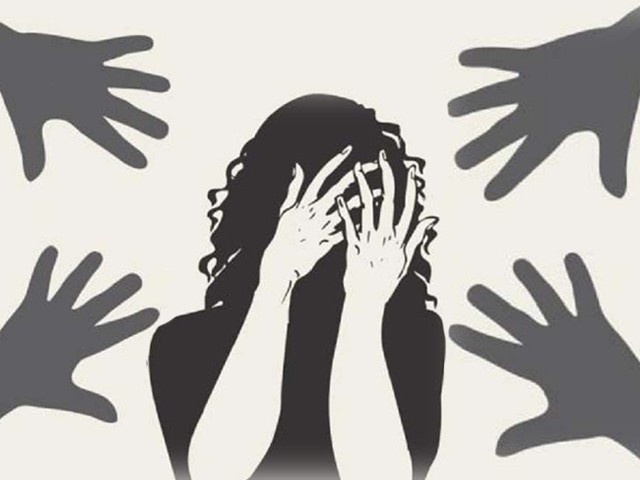 Twitter and Facebook were aflame with posts claiming the attacker carried out the rape even though the victim had called him 'brother'. PHOTO: ONLINE

Whenever a scandalous rape case makes the rounds in the news, it is accompanied by a familiar pattern of responses from the public. The horrifying news immediately invokes a wave of shock and pity amongst the masses. It inevitably elicits a sense of chill among parents, especially those who have daughters. And then there is this flood of remarks questioning the character of the victim for being in the place of the rape, especially if it happened at night.

And then come the comments wondering how a man, in spite of having a mother and sisters in his family, could perform such barbaric acts. Had he considered the victim as his sister for a moment, he would not have raped her.

Even if we pretend to ignore the deeply disturbing ‘she never should have been there’ argument, the concept of sister-tagging the victims is highly problematic. In the 2012 Nirbhaya case, the statement by a well-known self-proclaimed godman that Nirbhaya should have called the rapist her ‘brother’ and should have begged for her life, was met with a mixed response from the public. Some nodded their heads in silent agreement while some overtly supported this statement. The rest of us who realised the absurdity of this argument were too distracted by the bigger horrors of the Delhi rape case.

This sister tagging theory has appeared in a lot more instances, as with the recent Pollachi rape case. A video related to the incident that was circulated on social media, showed the victim addressing her attacker as ‘anna’ (brother), begging him to let her go. Shortly after, Twitter and Facebook were aflame with posts claiming the attacker carried out the rape even though the victim had called him ‘brother’. Am I the only one who is unaware of the switch inside every pervert and perpetrator’s mind that magically turns off the actions of sexual violence the instant he is referred to as a ‘brother’?

This is an obvious desperate measure that we’ve resorted to in order to appeal to the humanity of sexual predators. But by doing so, we have set the expectation for the rapist to have pity on someone who begs him and addresses him as her brother. This brings out a fundamental issue of persecuting someone, not for touching a woman without consent, but for refusing to let her go after she plays the ‘sister card’. Doesn’t this seem like an incredibly low standard to set? Isn’t it pathetic that we’re unable to meet even this abysmal standard?

The ramifications of this deep-rooted issue can be found in our everyday life. Women address cab drivers, shopkeepers, random strangers on the road as ‘bhaiya’ or ‘anna’. By doing so, they promptly erect an imaginary barrier, which they expect their ‘bhaiyas’ and ‘annas’ to not pervade. This notion of pulling out the sister card for self-preservation is so deeply instilled in women that it’s become almost instinctive.

This issue stems from years of ingrained patriarchal rules because of which a woman is perceived in one of the two ways – either as a goddess who needs to be safeguarded, or as a sexual object which can be shamed. In most cases, there is no middle ground where a woman is regarded as an individual outside of these stereotypes. In an era where women are striving hard to break free from such notions, how many more centuries is it going to take for us to stop constraining them with gender stereotypes?

Every woman is a unique individual. Labelling her as someone’s sister, ignoring her singular identity, and restricting and curtailing her rights won’t cut it anymore. Nobody has the right to touch a woman without her consent – not her brother, not her father, not her father-in-law, not her friend, boyfriend, nor her husband. No one has that right.

No woman should be raped. Period. Sister or no sister. Fully draped, scantily clothed, hair braided, hair loose, with lipstick, without lipstick, at her home, on the road, in the pub, in a deserted warehouse, in the morning, in the afternoon, after the sun goes down, at midnight. Nowhere, at any time, how matter how she is dressed, she should not be raped.

So, it’s time to stop teaching women to plead for mercy from their ‘brother’/attacker. It’s time to educate men to stop regarding women as objects to satisfy sexual desires regardless of whether the woman is a sister or not.

The author is a 25-year-old techie striving to shatter all forms of patriarchy around her. A proud Madrasi and a glass half full kinda girl, she finds happiness in little things.