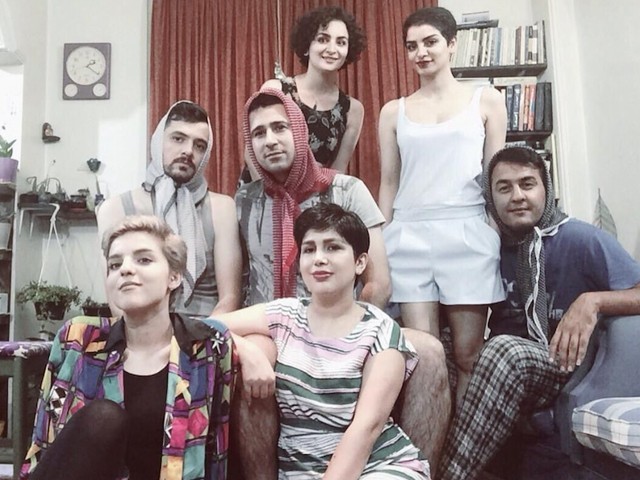 Every once in a while, I come across news that fills me with hope that patriarchy will indeed perish someday, and that all is not lost in vain. And the news about Iranian men donning hijabs, in solidarity with their wives was one of those rare moments.

For the past few days, several men have been posting pictures of themselves wearing the hijab – and some even wearing the full burqa – to not only show solidarity with their wives, who have been forced to cover up in accordance with the strict ‘modesty’ rules of the country, but also to protest against those very rules. Those who may be familiar with the history of Iran, the country underwent a stringent Islamic revolution in 1979, where reticence laws were enforced on women, both local and foreigners, to wear the headscarf in public. And if a woman was found to disobey or rebel against this law, she could face up to 70 lashes, or worse, be imprisoned for a period of two to three months.

Nevertheless, it appears that the inspiration for this initiative rose out of the anti-hijab movement entitled “My Stealthy Freedom,” which was founded by an Iranian-American journalist, Masih Alinejad, back in 2014. The aim of the movement was to encourage women living in Iran to bare their heads from their headscarves, and then post those pictures of themselves on social media. It was an attempt to rebel against the strict patriarchal rule of the country, and to show that women should have the freedom to bare their heads if they wanted to, without fear or debasement from the Iranian government.

Incredibly enough, the movement was deemed quite successful over social media; especially Facebook, where a Facebook page dedicated to the movement has, till date, acquired over one million likes. Currently, the page’s cover photo consists of men and women, where the women are bare-headed and wearing tank tops, and the men are in headscarves—a portrait that would not only be considered ‘taboo’, but is also undoubtedly the very first of its kind.

The Twitter hashtag #meninhijab has also been quite effective in gaining support from men across the world who have been brave enough to wear the headscarf in support of women’s freedom of choice to not wear the headscarf.

Such a great campaign.#MeninHijabs the forced doctrine brought upon women is disgusting & shows indeed it is not a religious reason!

#MenInHijab support women's right to choose if they want to wear hijab or not, it shouldn't be a punishable law pic.twitter.com/NJ9RU8uPxn

Although a brilliant initiative, this is not the first time that a group of courageous men have decided to rebel against an oppressive regime in support of women’s rights and liberation. Not too long ago, a group of 20 Afghan men donned shuttlecock burqas and marched down the streets of Kabul in order to protest and fight for gender equality. And it is men like these who will help abolish patriarchy, because patriarchy can only be eradicated if both men and women work in solidarity, against the issues that subjugate and demean women’s freedom and progress in the world.

I’ve always believed that men should be included, and become active participants, in the development process (of women), because gender inequality is very closely tied to not only men’s practices and identities, but also to their participation in their respective societies.

When we see men donning hijabs, or protesting oppressive garments like the hijab or burqa, it does not become a single gendered fight anymore—where women go to great lengths to fight against man-made rules and impositions. As a matter of fact, the most beautiful and powerful thing about men fighting patriarchy is that they are fighting against the very same ideology that was founded and enforced upon women—the ‘inferior’ sex—by their forefathers for several decades.

So, when we include men in the development process, we come to accept the notion that their identities and roles in society are not fixed, but are rather socially constructed; they can be modified and transformed in order to accommodate freedom and rights of fellow women. And by participating in such initiatives, they are doing exactly that. They are changing the narrative and fighting against the status quo. Yes, men invented patriarchy, but they will help destroy it too. At the end, both parties will win, and gender equality will finally see the light of day.

Here’s hoping that movements like #meninhijab will inspire and pave paths for more brave men to come forward and keep fighting the good fight: killing patriarchy once and for all.