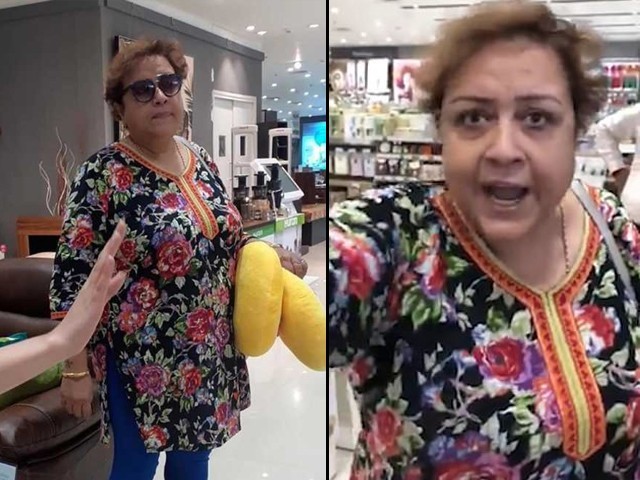 Middle-aged or not, the lady’s behaviour cannot be excused. PHOTO: FACEBOOK/ SHIVANI GUPTA

They say sometimes a woman is a woman’s worst enemy. In this instance, they have hit the nail on the head. In a mall in Delhi’s suburb of Gurugram, a middle-aged lady allegedly slut-shamed a bunch of young women openly. She was not their mother, or even someone they remotely knew.

No, this was a random ‘aunty’ who was simply not pleased with the way the girls were dressed. According to her, their outfits were indecent and they deserved everything nasty that came their way.

When the girls retaliated, saying they were comfortable in their skin and in their shorts, she reportedly addressed a group of random men saying,

(If you see such girls then you should rape them.)

Either this woman did not realise the implications of what she said, or maybe she lives in a parallel universe where crimes against women are non-existent. However, another lady can be seen coming to the defence of the girls, stating she also lets her daughter dress as per their wishes and walk freely on the streets. The woman wasn’t convinced however, and conveniently, as has become the norm for us now, put the onus on the parents for their daughters’ well-being.

Thus, the more time passes and the more things change, the more they remain the same. In our society, the fight to give our girls the equality that was missing in our generation is still very much alive; the issues may change, but that’s just subterfuge. Even in urban cities, the battle was and still is about the mindset. Ultimately, the freedom for a woman to choose is not as easy as it is made out to be.

The only thing that has perhaps evolved with time is the reaction of the girls who were being slut-shamed, as they did not take the matter lying down. They did go a little overboard in their response by fat-shaming the lady and forgetting that social media exaggerates the picture to no end. However, rape is not an easy word to digest, nor should it ever be.

Not surprisingly, a majority of male reactions have focused on crucifying these young girls, some for their dressing and others for their belligerence in cornering the ‘middle-aged’ lady and demanding an apology.

However, middle-aged or not, the lady’s behaviour cannot be excused. Perhaps the lady with a mission forgot that in and around our capital city, girls covered from head to toe in shalwar kameez have also not been spared and have been left to die after being sexually assaulted. Delhi – infamously referred to as the ‘rape capital’ – saw a rise in the reported cases of rape in 2018 compared to 2017, while the conviction rate decreased.

When you have a scenario applicable to women with only an upward crime graph, it becomes even scarier when a word like rape can be thrown around with so much ease and impunity. Many of us are fighting to make our girls stronger and our society safe enough that they can walk across the park safely and alone someday. We don’t need this right now, and especially not from one of our own.

Those people who are justifying the woman’s behaviour and suggesting there is nothing wrong with what she did, that she was just a ‘well-wisher’, are telling us to resign to our circumstances instead of fighting to make India a safe living environment for our girls.

We need to see that we have a problem, and a violent one at that, but we also know that once the media limelight on a particular rape case dies down, our people forget and our administration goes back to doing what it doesn’t do – making safety of women a priority.

In many ways Bollywood has added to terrible stereotypes, by making female antagonists in movies wear short clothes to conflate their clothes with their sinister nature. They even show women dressed in shorter clothes as inviting harassment or rape attempts, until saved by the ‘hero’. These movies have done no service to women who are independent and intelligent and are brought up to think for themselves by their families.

Perhaps these young girls should have just filed a police complaint, but we all know how discouraging our police stations can be, even towards more serious cases. In 2013, a single mother was gang-raped in the state of West Bengal, in what became known as the Park Street rape case. The woman eventually revealed her identity, saying she had nothing to be ashamed of, but not before she had been ridiculed at the police station, where the police men reportedly laughed at her and asked her which position she was raped in. Not just that, Chief Minister Mamata Banerjee called it a fabricated case and accused the survivor of trying to embarrass her government.

No, women don’t always look out for their own.

It’s getting old though, the constant disbelief over women’s accusations and the constant comparisons to western culture. Why do we in the subcontinent find it so difficult to move with the times, especially when it comes to our women? Why are we okay with accepting all aspects of western culture except for those that pertain to women’s freedom of choice? Why have the same rules never applied to our men? Will we forever remain at the cusp of traditional mindsets and modernity?

Meanwhile the woman in question finally ended up apologising, but in a post on Facebook which has been deleted. Possibly someone at home made her see some sense! Yes, she had a right to her opinion, but giving a war cry for rape should never go unpunished. At a time when many women in India are fighting for justice, including journalist Priya Ramani who is in court trying to prove sexual harassment charges against former minister MJ Akbar, this is not something the women fighting to take the narrative into the public discourse want to hear. It’s taken a lot to get here, to not be hindered and shunned by shame and embarrassment. This woman may only have been flippant and self-righteous, but the damage done by her thinking could have been immense.

This incident was a cocktail of old, traditional mindsets trying to hold on and stay relevant in an era of social media explosion, where everyone knows everything in minutes and where it’s hard to live down the ignominy of the fastest fingers first ‘insta’ click. But women hitting back, even with a tinge of immaturity, is a refreshing change for us, especially in a city where several accused in the #MeToo movement are blasé, walking into restaurants as though nothing that happened matters. The lady’s shout out only enforces what those who are guilty believe – that women are to blame for their own abuse.