No, India, Pakistan cannot and will not be bullied into silence 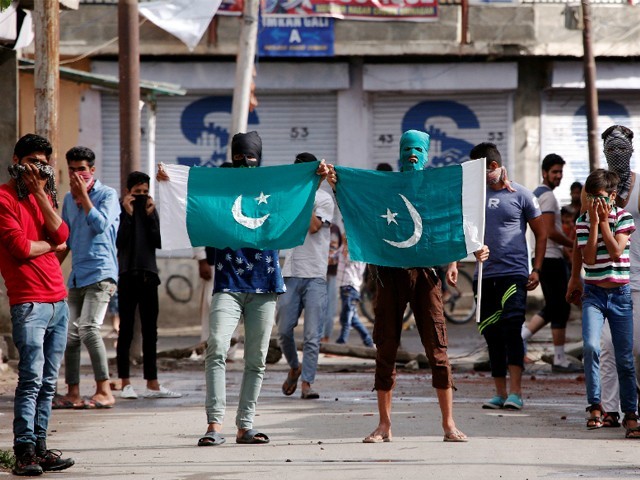 Kashmiri protesters hold the flag of Pakistan during a protest in Srinagar against the recent killings in IoK. PHOTO: REUTERS

India has summoned Pakistan’s ambassador, whilst New Delhi has warned that communications between Islamabad and political leaders in Indian-occupied Kashmir (IoK) will have “implications”, after Pakistan’s Foreign Minister Shah Mehmood Qureshi held a telephone conversation with Mirwaiz Umar Farooq, the leader of Kashmir’s All Parties Hurriyat Conference. Pakistan’s government responded to India’s protests by reminding New Delhi that Pakistan frequently corresponds with political and community leaders in IoK.

The fact of the matter is that it is not just perfectly appropriate but it is necessary for Pakistan to retain open lines of communication with politicians and community leaders in IoK. To suggest otherwise would be as absurd as stating that Arab politicians in countries as diverse as Egypt, Qatar, Syria and Saudi Arabia should not hold discussions with Palestinian leaders. Even Israel has not been so brazen in threatening Arab states for merely communicating with their fellow Arabs in occupied Palestine.

Pakistan remains IoK’s main lifeline to the wider world, given that India has made the occupied land largely inaccessible to the outside world. This isolation includes being cut off from independent journalists and human rights organisations.

As such it would be a supreme logical fallacy to say that whilst it is proper for nations including Turkey to voice concerns about the human rights situation in Myanmar and for Iran to voice its concerns about the situation in parts of the neighbouring Arab world, that it is somehow inappropriate for Pakistan to voice its concerns for and communicate with the appropriate figures in the human rights disaster zone that is IoK.

If anything, previous Pakistani governments have been negligent in respect to internationalising the issue of Kashmiri oppression, whilst it is equally true that many in Pakistan only mention Kashmir when prompted.

Instead, Kashmir should be seen as a central part of Pakistan’s quest for fulfilling its mandate to form a peaceful, united country built on the values of its Constitution and of the ideas of Muhammad Ali Jinnah.

Furthermore, the full normalisation of relations between Pakistan and India should be seen as contingent on the fact that Kashmiris are given their right to vote in the self-determination plebiscite that the United Nations(UN) has mandated in United Nations Security Council Resolution 47.

Until such a vote is held, relations between India and Pakistan cannot advance in a manner that is remotely related to international standards of normalcy. Just as Pakistan has fought against both state-sponsored and non-state terror in other parts of its borders, Pakistan should also use the appropriate international channels to raise the issue of Kashmir before an international community that has fallen silent on a matter of substantial importance.

The international community’s mum attitude towards the human rights disaster in IoK has been partly the result of Pakistan’s defeatist attitude which contrasts sharply with India’s increasingly obstinate position on Kashmir – especially since the late 1980’s.

Whilst India acts as though calls for a democratic plebiscite in Kashmir are somehow offensive to the Indian character, it is Pakistan that must make the case that only the Kashmiri people can decide on their penultimate destiny and that those who seek to prolong the self-evident misery of Kashmiris are acting as obstacles in the path of peace.

Not only does Pakistan need to open up more lines of communication with Kashmiri leaders but it must also tell the world what they are saying. Kashmiris are shouting to be heard and Pakistan is the most logical state that can help amplify these calls.

The fact of the matter is that neither Pakistan nor India want a nuclear war, even though both sides are capable of starting one. Yet, rather than Pakistan invoking the doctrine of mutually assured destruction (or perhaps better but mutually assured non-nuclear intervention) to call India’s bluff on Kashmir, it is India that has succeeded in bamboozling the world into silence over one of the most important international issues of human rights.

Pakistan should make its position clear that it will not stop speaking with Kashmiris and speaking louder on behalf of silenced Kashmiris, until the world realises that the issue must be addressed in earnest rather than obfuscated in the face of Indian bully tactics.