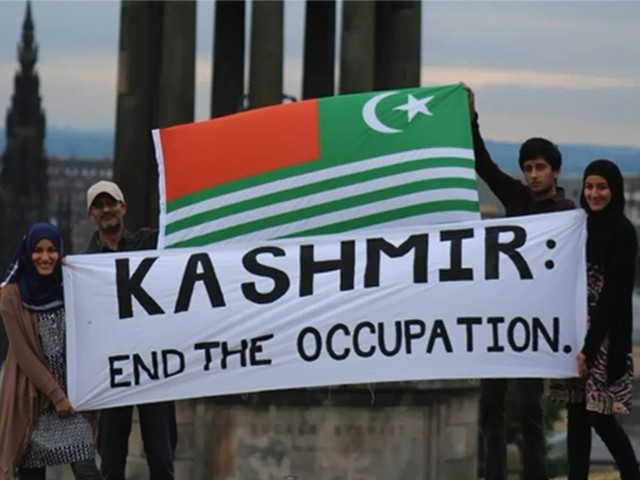 In 1995 the Outlook India magazine commissioned a survey in the Kashmir Valley. The Outlook-MODE poll found that “the quest for freedom in Kashmir remains undiminished”. PHOTO: TWITTER

India’s reluctance to any third party mediation in Kashmir is, at best, a juvenile attempt at distortion of history and denial of context. Deliberately ignoring historicity and context, the vast sections of Indian media are narrating fairy tales on Kashmir while cashing on falsehood, provocation, propaganda and vitriol with an aim to insult the intelligence of a common man in India and hoodwink international audiences.

India took the Kashmir case to the United Nations (UN). Nothing can be more ironic than the fact that it is India which is averse to the UN intervention on Kashmir issue. New Delhi’s denialism and its corporate media’s frozen mindsets are main impediments in the Kashmir resolution.

During M K Gandhi’s visit to Srinagar, the summer capital of Indian administered Kashmir, in August 1947, declared that he had,

On August 14, 1947, the erstwhile Jammu and Kashmir was one of the 562 princely states under the suzerainty of the British Crown which were not a part of British India. On the lapse of paramountcy on the transfer of power, Jammu and Kashmir became independent and was free to accede to either of the two dominions, Pakistan and India, or to remain independent.

“Let me make it clear that it has been our policy all along that where there is a dispute about the accession of a State to either Dominion, the decision must be made by the people of the State. It was in accordance with this policy that we added a proviso to the Instrument of Accession of Kashmir.” – (White Paper on Jammu and Kashmir, p. 45)

In his broadcast on All India Radio, the Indian Prime Minister also said,

“We have declared that the fate of Kashmir ultimately has to be decided by the people. That pledge we have given, and the Maharaja (Maharaja Hari Singh) has supported it, not only to the people of Kashmir but to the world. We will not, and cannot, back out of it.”

Prior to this, Nehru had assured the Prime Minister of Pakistan, Liaquat Ali Khan, on October 31, 1947, that India’s pledge to hold a plebiscite in Kashmir on whether it should accede to India or Pakistan “is not merely a pledge to your government but also to the people of Kashmir and to the world.”

Sixty-nine years after partition, a plebiscite in Kashmir remains a moral imperative, besides being a democratic necessity. More so, after the renewed romantic rebellion and Palestinian-style Intifada post-Burhan Wani uprising spearheaded by the fifth generation of Kashmiris, which has resulted in the brutal killing of 92 unarmed civilians, 15,000 injuries, over 800 pellet injuries in the eyes, scores of blinding and maiming, 7000 arrests and registration of 2300 FIRs against youth, which mostly include teenagers, in Indian-administered Kashmir.

In 1995, the Outlook India magazine commissioned a survey in the Kashmir Valley. The Outlook-MODE poll found that “the quest for freedom in Kashmir remains undiminished”.

The poll established beyond doubt that the yearning for azaadi (freedom) remains as intense.

“A whopping 77 % are firm in their belief that a solution to the Kashmir problem does not lie within the framework of the Indian Constitution, and a clear 72% say categorically that it is independence alone which can bring peace in the violence-riven Valley.” – (Outlook India, Issue October 1995)

In an interview with NDTV’s Barkha Dutt in a programme Buck Stops Here in September 2016, public intellectual Guha, while speaking on identity politics drew parallels between the Kashmir issue and Tamils in Sri Lanka.

“The Sri Lankan’s treatment of Tamils is like the Indian treatment of Kashmiris — harsh, arbitrary, involving the excessive use of force and denying local autonomy. At the same time, those who are protesting against discrimination (both the Tamils in Sri Lanka and the Kashmiris in India), while they have legitimate grievances have expressed these grievances too much through the vehicle of armed struggle and the assassination of rivals and the purging of minorities, the Tamil Tigers purged Muslims and Kashmiri Muslims purged Kashmiri Pandits. It is a complex problem. The large party of the blame lies with the states, the Indian state and Sri Lankan state.”

There are lessons that can be drawn from the Northern Ireland example to resolve the Kashmir conflict that involves Kashmiri nationalism, identity, language, religion and geopolitics. With India as emerging global power, the rise of hyper nationalism is preventing the country from any meaningful resolution to conflict in Kashmir, making it an intractable geo-political dispute.

In case of Kashmir what seemingly renders it as ‘intractable’ is India’s flat refusal to any third-party mediation and colossal human rights abuses at the hands of the Indian army, paramilitary and regional police forces inside the disputed Himalayan region on a daily basis, and also because of Pakistan’s official claim on entire Kashmir and its “diplomatic, political and moral” support to the struggle of Kashmiris for “self-determination”.

Some parallels can be drawn between the two conflicts: Northern Ireland and Kashmir, both taking place within electoral democracies (United Kingdom and India). Firstly, like the violent guerrilla warfare between the Irish Republican Army (IRA) and the British troops, there is an on-going armed rebellion against Indian rule in Kashmir since 1989.

Though the levels of violence have significantly dropped over the years, the deadly encounters between Kashmiri militants and the Indian army have not completely ended. Also, the IRA is in some ways comparable to the Jammu & Kashmir Liberation Front (JKLF), a pro-freedom group which launched the armed movement in 1989 and limited its role to political struggle after 1994.

Jammu & Kashmir Liberation Front, a former guerrilla outfit fighting for Kashmir’s independence, led by its chief commander, Mohammad Yasin Malik, announced a unilateral ceasefire on May 21, 1994, to pursue its struggle through political means. Around the same time, on August 31, 1994, the IRA announced “complete cessation of its military operations.”

Secondly, just as a draconian law, called the Special Powers Act (SPA), gave the authorities exceptional powers to arrest, detain without trial, and suppress political dissent in Northern Ireland, the Indian army has also been enjoying impunity and complete immunity from prosecution in Jammu & Kashmir under the shield of the Armed Forces Special Powers Act (AFSPA) since June 1990.

Brutal suppression to kill dissent in Kashmir has not worked for the last seven decades. It is unlikely to work in the future too. No country in the world has produced weapons that can kill genuine political aspirations. There is India’s denialism, language of power, media propaganda, war mongering and argument of military might, but Kashmiris have power in their argument.

It is in the larger national and strategic interest of both Pakistan and India to behave as mature democracies like the United Kingdom does and work together to pave the way for a referendum, under the auspices of an international body like the UN, in both parts of Kashmir divided by a bloody Line of Control (LoC). A referendum in Scotland and Brexit are recent examples of respecting people’s choices outside the fold of electoral democracy.