Why nobody wants to help Myanmar’s unwanted Rohingya 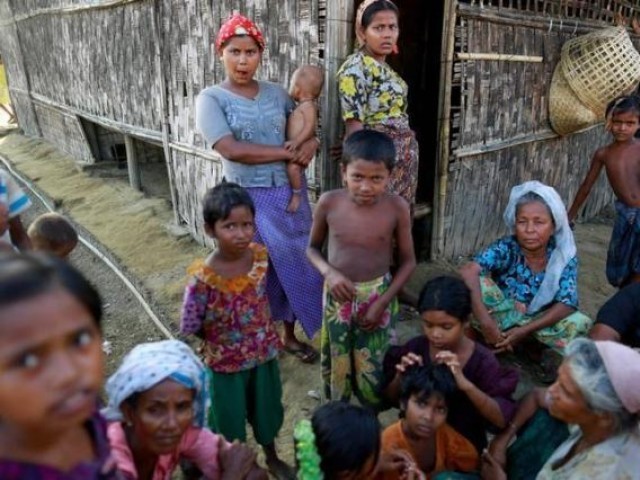 Rohingya Muslims pass time near their shelter at a refugee camp outside Sittwe. PHOTO: REUTERS.

The international community has largely ignored the political situation regarding the Rohingya Muslim minority in Myanmar. The Rohingya have been systematically disenfranchised and persecuted in their home state of Myanmar, having been denied the rights of citizenship, worship, marriage and education.

Since 2012, the Rohingya have been subjected to numerous acts of violence by the Buddhist majority leading to hundreds of deaths, destruction of property, and a mass exodus of Rohingya with estimates stating that around 100,000 are living in internment camps and 200,000 more residing in unofficial camps in Bangladesh.

In 2013, mosques and Muslim-owned businesses were destroyed by a 300-member mob in central Myanmar in a series of violent episodes throughout the years.

On January 11, 2017, Myanmar’s new political leader, Aung San Suu Kyi, sent a special envoy to Bangladesh to discuss the political situation regarding the persecuted population that she deems foreign and prefers to call Bengali rather than Rohingya. This was following the events of October 9, 2016, when Rohingya militants attacked a Myanmar border post, killing nine police officers.

This led to a brutal crackdown by the state with reports stating that there have been “summary executions, arbitrary arrests and rape in the operation”. In defence of these accusations, Aung Win, chairman of a Rakhine state investigation, has pleaded innocence by stating that soldiers would not rape Rohingya women due to the belief that they “are very dirty”.

In the last three months of 2016, 65,000 Rohingya refugees fled to Bangladesh for safety, following the military crackdown by the Myanmar forces, but have been met with further hostility in Bangladesh. Bangladesh has refused to register the Rohingya population within their borders as refugees, and uses troops to guard the border to stem the flow of the persecuted population.

Bangladesh believes that Rohingya refugees are responsible for the “deteriorating law and order in the country’s south-east”. Furthermore, economic concerns have also come to the fore as 33,000 Rohingya refugees live in two camps near Cox’s Bazar, a tourist resort city with a beachfront that is prized by the state.

The Rohingya situation has also exacerbated tensions between the two states, Bangladesh and Myanmar, with reports indicating that the Myanmar navy has shot at Bengali fisherman. With tensions flaring, the decision by Aung San Suu Kyi to send a special envoy is encouraging. Myanmar’s deputy minister of foreign affairs, Kyaw Tin, visited Bangladesh’s capital Dhaka in an attempt to encourage further cooperation between the two states.

However, the visit did not bring any concrete results as the Bangladesh government expressed that,

“Myanmar should take a holistic approach for developing a comprehensive mechanism for sustainable repatriation of its nationals to their home in Rakhine state at the earliest.”

An official quoted the prime minister specifically stating to the envoy that Myanmar needs to “take back your own people home”.

In the meantime, Bangladesh has been receiving numerous criticisms for relocating refugees to the remote uninhabitable island of Thengar Char that rights groups have said risks the creation of a “humanitarian catastrophe”. The impetus by the Bangladesh government behind these actions is to prevent the “intermingling” of the refugees and the Bangladeshi population. Rohingya refugees who have been living in Bangladesh for multiple years have stated that they would rather risk the dangerous sea voyage to Indonesia or Malaysia rather than be relocated to the island.

A political solution to the situation is unlikely to be found anytime soon as the Rohingya refugees continue to suffer in their current condition. As of November 21, 2016, humanitarian assistance to the area has been completely cut off and international organisations such as Unicef have argued that thousands of children are in danger of being starved or risk death from a lack of medical care in Myanmar.

“The gravity and scale of these allegations begs the robust reaction of the international community.”

The report found that “security forces members sometimes beat, raped or killed people in front of their relatives with the intention of ‘humiliating and instilling fear’”.

On February 3, 2017, the presidential spokesman, U Zaw Htay, stated that the allegations were being taken seriously and that an existing commission would investigate these claims, but concrete results regarding the safety and repatriation of the Rohingya are unlikely to occur anytime soon.

The author works as a researcher at the South Asia Program at Hudson Institute in Washington DC.

Is Afghanistan side-lining the US for its alliance with Russia, Pakistan and China?