Black Day: Without international mediation, there can be no lasting peaceful resolution in Kashmir 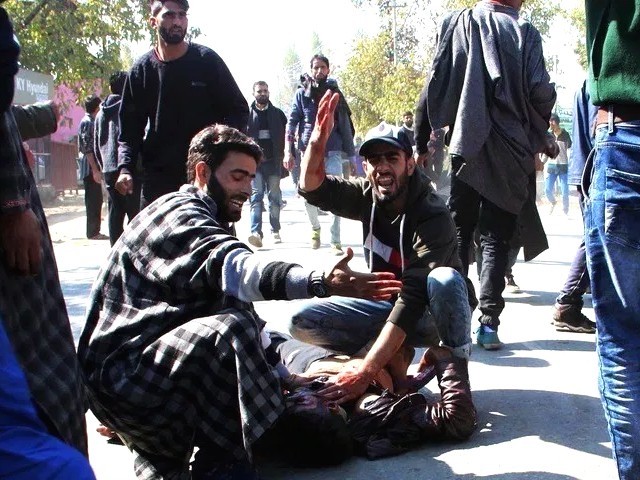 Kashmiri men gesture as another lies on the ground after a blast near a residential house in Kulgam on October 21, 2018. PHOTO: AFP

The impasse that is the land of Kashmir – which Allama Iqbal described as “heaven on earth” – has shown little signs of abating, with only escalations in sight.

On October 21st, thousands of demonstrators marched on a village in Kulgam, where Indian forces were battling an unaccounted number of suspected Kashmiri fighters. This led to a shootout in which Indian troops killed at least 14 youths and injured at least 30 others in the Laroo area of the Kulgam district, in an attack that included pillaging and destruction of the neighbourhood, according to local police and military officials in the vicinity. Amongst the dead were two Kashmiri youths who were martyred after an unexploded bomb planted by Indian forces went off whilst they were removing debris off a destroyed house.

This comes after a six-month pregnant woman named Firdousa was killed on October 19th in the Pulwama district. Prime Minister Imran Khan has strongly condemned the resurgence of violence in Indian-occupied Kashmir (IoK) by Indian troops:

Strongly condemn the new cycle of killings of innocent Kashmiris in IOK by Indian security forces. It is time India realised it must move to resolve the Kashmir dispute through dialogue in accordance with the UN SC resolutions & the wishes of the Kashmiri people.

While during a recent visit to the Line of Control (LoC), Pakistan Army Chief General Qamar Javed Bajwa stated:

COAS visited troops on LOC. “Pak Army is fully invested in peace & stability of the region. We are ready & resolute in defending the motherland against any misadventure. Kashmir remains the core unresolved agenda & we standby the Kashmiris in their just historical stance”, COAS. pic.twitter.com/FNOVGcOExu

An Amnesty International India report has now called for an independent and impartial investigation into the killing of civilians as a result of the blast in the aftermath of the Kulgam encounter. Their Executive Director Aakar Patel reiterated that whenever there is any direct or indirect violence between security forces and armed groups, it is imperative that innocent civilians do not become collateral damage because their safety should be a priority.

The Kashmir dispute has plagued regional and international discourse pertaining to South Asia since 1947, when the Partition of Pakistan from India took place and thereafter Kashmir was either to be a sovereign independent land for the Kashmiri people or adjoin Pakistan or India, depending on the will of the Kashmiri people. The option for exclusive independence was never really entertained in any official Partition documents or international agreements brokered by the British between Pakistan and India. What was put on the table was that Kashmir would become part of either Pakistan or India, and the lack of a resolution was followed by decades of war and violence.

A recent report by the Office of the United Nations High Commissioner for Human Rights (OHCHR) highlights the wide range of ongoing serious human rights violations and patterns of impunity in IoK, particularly from July 2016 to April 2018.

Whilst the report documents in detail the human rights violations taking place via the auspices of India and Pakistan, there is no doubt that an unbiased and objective analysis of the report would lead to the conclusion that most of the violations are being committed by India. In particular, the OHCHR has been alarmed by the frequent reports of increasing infringements of the ceasefire agreement since 2018, including shelling and shooting that have resulted in civilian casualties and the forced displacement of people living along the LoC, and has called on both states to cease all shelling and firing along the LoC to ensure the rights of civilians living in these areas are respected and protected.

The OHCHR report was produced relying on a lot of authenticated secondary and verified sources due to the restrictions on access to Kashmir imposed by both governments. It thus recommends to the Human Rights Council the consideration and possible establishment of a commission of inquiry to conduct a comprehensive independent international investigation into allegations of human rights violations in Kashmir, making 17 core recommendations to the authorities in India and seven to the authorities in Pakistan.

For India, this includes respecting international law and repealing the Armed Forces (Jammu and Kashmir) Special Powers Act of 1990, which allows effective immunity from prosecution for Indian army personnel committing human rights violations in IoK. In this non-exhaustive list, emphasis is placed on respecting international conventions as well as respecting the right of the Kashmiri people to self-determination.

For Pakistan, this includes respecting international human rights law obligations and ending the misuse of anti-terror legislation for peaceful protestors, as well as releasing any political activists, journalists and other civil society actors who have been convicted for peacefully expressing their opinions.

However, despite the widespread international awareness raised on the plight of Kashmir since its publication, the report and its findings have been categorically rejected by the Indian authorities, and the recent spike in violence only further reaffirms the need to open the doors of dialogue between Pakistan and India.

In his inaugural address to the nation, Imran opened the doors of dialogue to India and attempted to bring a state of civility and cooperation to the diplomatic relations between Pakistan and India by stating,

“If India takes one step forward, Pakistan will take two.”

There would have been no better international forum to commence bilateral talks again than the recently held session of the United Nations General Assembly (UNGA). Instead, Indian Minister for External Affairs Sushma Swaraj cancelled at the last minute and used her address to dish out unhelpful vitriol against Pakistan by accusing it of harbouring terrorists, in effect shutting the door to any constructive dialogue and hope for friendly relations between the two high powered nuclear states. The shutting of the diplomatic door by India was further demonstrated during a meeting of the members of the South Asian Association for Regional Cooperation (SAARC) where Swaraj refused to engage in any dialogue with the Pakistan Minister of Foreign Affairs Shah Mehmood Qureshi, who was in attendance at the same meeting and had given a powerful speech at the UNGA on the plight of Kashmir.

This prime opportunity to engage in constructive dialogue after a new government was elected in Pakistan was squandered due to political point scoring by Narendra Modi’s Bharatiya Janata Party (BJP) in order to appease their political base at home through anti-Pakistan rhetoric as elections loom in India.

Now, as Pakistan observes Black Day today to express solidarity with the people of occupied Kashmir in their peaceful struggle for their right to self-determination, major western states such as the US and the UK refuse to engage in any meaningful brokering on the issue by dismissing it as a bilateral issue between Pakistan and India. There is no doubt that involvement from a credible, independent, neutral and powerful nation-state is required to facilitate and broker a lasting peaceful resolution for the people of Kashmir. Whether that country is the US, China, UK, or any other appropriate neutral arbitrator willing to put their name into the hat, one thing is for sure: until the international comity of nations recognises that the resolution of the Kashmir dispute will not materialise via bilateral negotiations but will require multi-lateral oversight based on international law, treaties and human rights obligations, the desperate plight of innocent civilians in IoK will ensue, as aptly demonstrated by the regular resurgence of violence in Srinagar and the Kulgam district.

If Pakistan can play the role of a mediator in the tragic three-year long Saudi-Yemen war, a power nation such as China, which also stands to benefit, can do the same in the case of the Kashmir dispute.

The writer is a multi-disciplinary public-private sector and international relations professional based in the UK. He is also an independent analyst, and a Global Diplomatic Forum Alumnus. He tweets @KaleemHussain20 (twitter.com/KaleemHussain20)

Mythbusting Peshawar: No longer a hotbed of drugs, AK-47s and terrorism

What does the IS have in common with the US?