Imran Khan has attended 6 out of 34 NA sessions, yet blames opposition for wasting taxpayers’ money 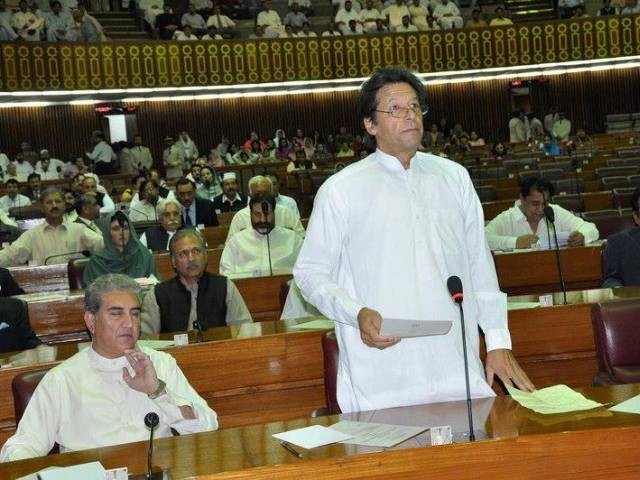 It is apparent from his tweet that the PTI government is panicking because the opposition is giving them a thoroughly tough time in the NA. PHOTO: PTI

Pakistan Tehreek-e-Insaf (PTI) have been on the receiving end of disapproval since they assumed power in the centre. The inappropriate behaviour and foul language of the federal and provincial ministers and their inability to accept criticism has landed the PTI government into many controversies. Even Prime Minister Imran Khan has still not been able to move on from the ‘opposition mindset’, and every now and then has passed statements that have actually ended up embarrassing his own office and cabinet.

Another such statement came to the limelight through the prime minister’s recent tweet. On Monday, the opposition walked out of the National Assembly (NA) after Shehbaz Sharif questioned the bidding process of Mohmand Dam fund and called for a fair rebidding. This walkout led to Imran tweeting that the opposition was not co-operating with the government.

In a Parliament that costs taxpayers billions yearly, yet another walkout in NA by the Opposition shows that this is the only function they intend to perform. These are pressure tactics to seek an NRO & evade accountability for corruption in NAB cases not initiated by PTI.

It is apparent from this tweet that the PTI government is panicking because the opposition is giving them a thoroughly tough time in the NA. By not co-operating with the government and staging regular walkouts, the opposition has almost made it impossible for the government to form standing committees in order to pass legislation. In the midst of his outburst though, what Imran has clearly forgotten is the fact that not long ago, he and his party members used to boycott the NA sessions regularly when they were in opposition.

In fact, in 2014, when PTI staged their famous dharna against the Pakistan Muslim League-Nawaz (PML-N) government, Imran and his ministers did not attend the sessions for almost four months. One wonders why he did not realise then that he was “wasting the taxpayer’s money” by not attending the NA sessions. His poor attendance record also speaks for itself. According to Free and Fair Election Network (FAFEN), the PTI chief attended 20 out of 465 house sittings. His abysmal record did not change during his own tenure of premiership; he has only attended six sessions out of the 34. His record clearly indicates his lack of interest in the house proceedings.

When he took the oath, he vowed to attend question-answer sessions every week and respond to any grievances that the opposition may have. However, like most of the promises he has made in the past, this one also saw a U-turn. It is obvious why he wasn’t able to carry out his promise: his short temper and the inability to bear criticism from the opposition are reasons enough.

Perhaps Imran didn’t fathom that one day he might get a taste of his own medicine, after all he used to address the opposition using derogatory terms and deemed sitting in the NA as a waste of time and that it only protected the corrupt. Now that he is in the government, the opposition is using the same tactics on him albeit respectfully since we still haven’t seen any senior ranked opposition leader using below-the-belt language against him like he used against the former prime minister and NA.

A prime minister who does not appear in the NA himself has no moral authority to lecture his opponents on its importance and wasting the taxpayer’s money. How can you accuse others of disruption and wrongdoing when you yourself have been doing the same? How does this not seem hypocritical?

It seems that PTI assumes they can dodge the rules and regulations as a reward for being ‘the purest of the political breed’ while PML-N and the rest of the opposition need to follow through because they are allegedly corrupt. This ‘better than thou’ attitude has created a lot of hindrances for the PTI-led government and that is why the NA stands still with only two standing committees formed so far and a very poor record of legislation. The only way forward is for PTI to work with the opposition because they need their support to pass legislations and run the affairs of the state. Merely accusing the opposition of corruption will not help the PTI government in running the house nor will it help them solve the political and economic crises the country is facing.

Moreover, Imran in the same tweet also questioned whether democracy means immunity for the democratically-elected. To this, I would only like to commend him because he is right in saying that no one should have immunity and everyone should be held accountable. However, does this golden rule also apply to Aleema Khanum, Pervez Khattak, Aleem Khan, Zulfi Bukhari and Jahangir Tareen?

Does democracy mean immunity from corruption of democratically elected political leaders? It seems for them being elected is a license to plunder the country. https://t.co/POpMhLg7L1

While sitting on the opposition benches, Imran used to call out Nawaz Sharif for undermining the parliament by not attending the NA sessions. Going by his logic, it is now Imran who should be under fire for doing the same thing. The taxpayer’s money is also spent by the prime minister and by not attending the parliament session, he too is equally responsible for wasting resources. In a democracy, the opposition is supposed to give the government a tough time and the government needs to stay calm in response and run the affairs of the state. Before tweeting out in anger, perhaps Imran should set an example by actually attending these ‘valuable’ sessions himself. Walk the talk, prime minister!