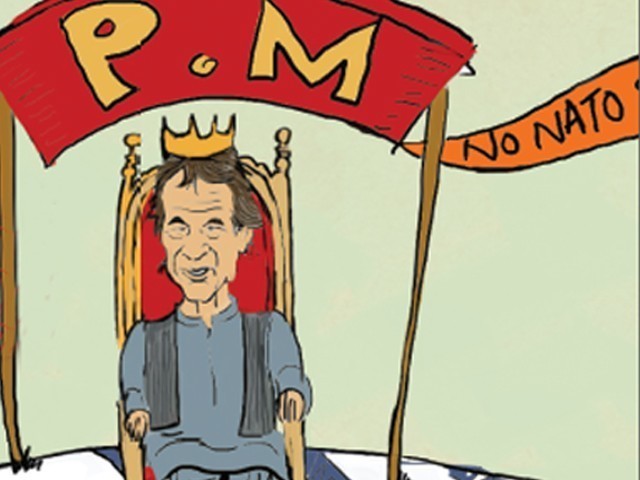 I had always admired Imran Khan. Even though I knew his party would not win in my constituency, I stood in line and voted for the Pakistan Tehreek-e-Insaf (PTI) candidate. But what has happened recently in the country has convinced me that Imran Khan is not suitable to be the country’s top leader and I have my reasons to believe so:

1. He is not consistent. He first accepted the results of the general elections, and then a year later claimed they were massively rigged.

2. He continues to backtrack. First he wanted elections only in four Punjab constituencies (one of which was not won by Pakistan Muslim League-Nawaz – PML-N), ignoring the fact that even if his party had won the four seats, they would still have been in the opposition.

3. Even though all other political parties (including his allies, the Jamaat-e-Islami – JI) have not supported his stance, he continues to rant and rave, like a kid who has been deprived of his candy. Surely no one can respect such a politician?

4. He continues making wild allegations against the former chief justice, former chief election commissioner (both of whom he admired even after the elections). He also claimed that a brigadier was involved in the rigging, yet he has refused to name him. Mature politicians, in civilised countries, measure their words carefully before making such accusations.

5. His antics have only served to make his party very unpopular. No politician the world over would ever ask people not to pay taxes or utility bills, in a quest for civil disobedience. In all countries, such an act would be considered treasonable. Thankfully, most people have disregarded his request and even one of his own close confidants paid the due sales tax this month. Imran Khan fails to comprehend that if people in PTI-run province of Khyber-Pakhtunkhwa (K-P) stopped paying taxes, the government there would collapse in no time.

6. Imran Khan even said that if his party came to power it would not pay its debts to international donors. This immediately led to the cancellation of the IMF delegation’s visit to Pakistan. How will world leaders ever trust such a man who does not care a damn for the country’s interests? Two world leaders have already cancelled their trips to Pakistan, and it is doubtful if the Chinese president will want to come if the dharnas continue.

7. A couple of times he has hinted that he wants to become the next prime minister. That, of course, let the cat out of the bag. If your only interest is to become prime minister, Mr Khan, why have you held the country hostage for the past 10 days? Why have you caused irreparable damage to Pakistan just because you want power? Why can’t you wait until the next elections? Or do you think if you continue damaging the country, the army will intervene and put you in the driver’s seat?

8. He and his party members have sent resignations to the National Assembly speaker, but strangely, they refuse to resign from the Khyber-Pakhtunkhwa (K-P) assembly. Why? Is it because remaining in power in one province gives them perks and privileges they would rather continue to enjoy?

9. And lastly, will his National Assembly members return the millions they took from the government during the past 16 months? I would be very surprised if they do.