Walk it like you talk it: What (little) did PTI achieve in its first 100 days? 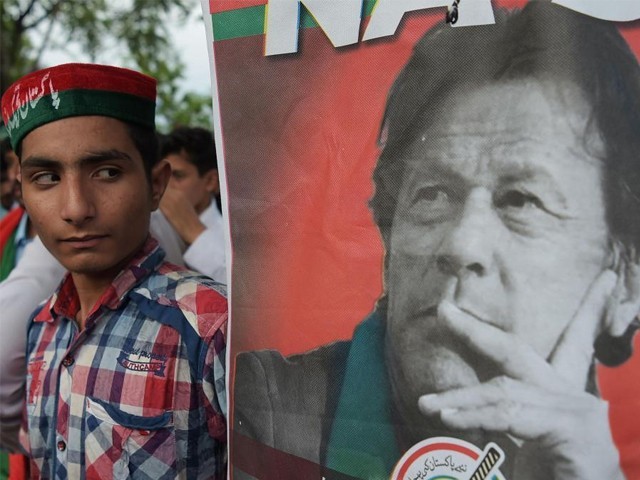 A PTI supporter stands next to a poster of Imran Khan in Islamabad: PHOTO: AFP

The Pakistan Tehreek-e-Insaf (PTI) government has finally completed its first 100 days in power. While the number itself is insignificant to judge any government’s performance, it was Imran Khan and the rest of PTI that created the hype over the 100-day agenda to begin with, even before the party won the General Elections.

It was perhaps this promise and this plan that played a role in the PTI winning the elections. However, contrary to expectations, these 100 days were not smooth sailing for the PTI. On the contrary, they were marked with controversies, cases in the Supreme Court, U-turns, an economic collapse, and efforts to bring peace, both internally and beyond our borders.

The following are the highlights, both good and bad, from the past 100 days.

Soon after assuming office, Imran announced the austerity drive to cut down unnecessary expenses in order to save the public’s money. He initiated this drive by implementing it on himself first by reducing unnecessary staff (transferring them to other government departments), and auctioning cars and buffaloes from the Prime Minister House. According to the government, these steps saved the national exchequer Rs147 million. However, the opposition declared this drive a political stunt to somehow grab the sympathy of the masses.

PTI inherited the economic crisis from the caretaker setup, which is why fixing the economy was the first priority of its government. It needed immediate cash to decrease the current account deficit in the balance of payments. Imran’s visit to Saudi Arabia yielded the desired results, as we received $6 billion for relief. Though this money was not enough to get us out of the mess, it can nonetheless be credited as an achievement of the PTI at not only getting relief but also maintaining a strong relationship between the two countries; ties that were not as strong under Nawaz Sharif’s previous tenure, as he swiftly rejected the Saudi request to send Pakistani troops to fight in the war in Yemen. Critics, however, have serious concerns over whether this Saudi aid will inevitably make us an ally directly involved in the conflict in Yemen.

Imran completely changed his stance regarding Pakistan’s relationship with India after coming into power. From raising slogans like “Modi ka jo yaar hai, ghaddar hai” (Modi’s friend is a traitor) to claiming Pakistan will take two steps if India takes one, from inviting Navjot Singh Sidhu to his oath-taking ceremony and opening the Kartarpur border for Sikh pilgrimage, Imran has shown good signs of maturity. Foreign Minister Shah Mehmood Qureshi is also busy in efforts to engage the Indian government, despite the Bharatiya Janata Party (BJP) being reluctant to do so due to the upcoming General Elections in India.

Nevertheless, the government should be lauded for the effort to maintain peace, for it gives people hope that once the elections in India have taken place, both sides may be equally willing to give peace a chance. However, critics continue to point out the lack of interest shown by India in this regard, as well as the recent escalations in occupied Kashmir. As Nawaz enjoyed a cordial relationship with Narendra Modi and was able to achieve a lot before the Uri and Pathankot attacks, the opposition remains concerned over the government’s failure to engage India.

Shelter for the poor

The premier’s recent orders to provide shelter to the homeless is a very good initiative, and one undoubtedly has to give full marks to Imran for showing empathy for the marginalised segment of the population; people who have been neglected by all former governments. Imran has also ordered the building of shelter homes in order to provide the homeless much-needed roof and accommodation, particularly during the winter.

Imran has always maintained he holds the secret to overcoming the economic woes of the country, and yet these 100 days have not been enough for him to address the structural problems at the root of the crisis. The lack of a plan in this regard has resulted in the currency crisis and stock exchange crash.

During his campaign, Imran claimed to never approach the International Monetary Fund (IMF), and yet backtracked on this multiple times as he approached Saudi Arabia and China, resulting in declining reserves and the devaluation of the rupee against the US dollar, only for him to reach the conclusion that an IMF bailout was necessary. When they finally did approach the IMF, his financial team’s inefficiency delayed the approval and further worsened the currency crisis, and there remains no end in sight.

What Imran will perhaps be best remembered for over his career now will be his practice of taking U-turns, and his recent attempt at defending this habit. The list of these U-turns is ever-growing and embarrassing for the party, because while some backtracking is common in politics, PTI has become best known for never staying true to its claims and constantly retreating on its word. This has only given his critics and the opposition fuel to add to the fire started by the PTI government.

After taking oath, Imran announced that unlike his predecessors, he would not neglect the Parliament and vowed to present himself in question answer sessions on the floor of the house every week  – another unfulfilled promise. Additionally, important positions such as the chairman of the Public Accounts Committee and chairmanships of the standing committees also remain vacant, simply because the sitting government does not wish to award key positions to members of the opposition. The overall careless and uncivilised attitude of PTI ministers in the Parliament, and the habit of accusing political rivals in the house without solid evidence has also only undermined an important pillar of democracy since the PTI took over.

One of the many promises made was to reform the police and rid it of political interference, but the reality is the opposite of what was promised. There were too many controversies in this regard, from the Pakpattan fiasco, to transferring the Inspector General (IG) Islamabad to the resignation of Nasir Durrani in protest of the undue political pressure on police by the PTI. These instances only proved that PTI, like every other political party in the country, is only interested in using the police for its own vested interests.

Unrealistic schemes like building five million homes for common citizens  without any concrete paperwork brought  an embarrassment for the PTI, as none of its economic wizards have been able to prove that this scheme is real or possible to execute, given that the banks in Pakistan do not have enough capital to sponsor the scheme and the interest rates on mortgage are so high that it almost makes it impossible for a common man to pay the monthly instalment. Likewise, the announcement of creating 10 million jobs in the next five years also saw no progress and the finance minister admitted it was mere sloganeering to win the elections.

The PTI government was expected to consider merit while appointing people and yet we mainly saw Imran’s friends, such as Zulfi Bukhari and Aown Chaudhry, being given key advisory positions while Jahangir Tareen, despite being disqualified by the Supreme Court, remained the most powerful figure of the party and is virtually the uncrowned chief minister of Punjab.

If the first 100 days proved anything, it was that the slogan of accountability only applies to opponents of the PTI. The party has thus far appointed its own member as the Chairman Public Accounts Committee (PAC) of the Khyber Pakhtunkhwa (K-P) Assembly. Meanwhile, Imran’s sister Aleema Khan had her name appear in the Dubai leaks, revealing undisclosed property worth billions. And yet she was given the opportunity to avail amnesty by only submitting a nominal fine and was not asked to reveal her source of income. Similarly, cases against Aleem Khan, Bukhari and Pervaiz Khattak have seen an immensely slow progress in the National Accountability Bureau (NAB), while Imran meeting NAB’s chairman also gave the impression that PTI is somehow is exempt from accountability.

How does this compare to the previous government?

While the PTI’s first 100 days are largely marked with incompetence and a lack of expertise in governance, the Pakistan Muslim League-Nawaz (PML-N), when it assumed power in 2013, had the luxury of a well prepared team taking over power. The likes of Ashan Iqbal, Khawaja Asif, Sartaj Aziz and Pervaiz Rashid were competent enough to run their ministries with conviction and purpose. While the PML-N seemed prepared to tackle the economy, the biggest challenges it faced at the time were the power crisis and terrorism. After assuming office, Nawaz immediately went for an IMF bailout which thwarted the currency devaluation crisis, unlike PTI’s delay that only worsened the crisis for this government. The PML-N was also able to forge a number of projects and agreements from China during Nawaz’s first visit, while Imran’s achievements from his visit remain unclear.

Nawaz held meetings to restore peace in Karachi, while Imran has not yet revealed his plans to tackle the Pakhtun unrest in K-P. While the PML-N worked on finalising power projects and tackling security challenges, Imran has not inherited a similar power crisis or terrorism menace. Due to this, his government was expected to provide relief to the masses after taking over. Instead, it failed to control inflation, and price hikes were witnessed as soon as the PTI came into power.

The brief comparison of the first 100 days of the PTI and the PML-N governments shows that PML-N was able to steer the ship primarily due to its experience and the will to execute its plans, whereas the PTI appears to be deprived of the expertise required to execute the plans it relays to the public. Nonetheless, most realists are aware that the 100-day agenda was a stretch from the start, and that the PTI has a long road ahead to catch up with the PML-N on the governance front, primarily if it fixes its priorities and stops purely talking a big game.