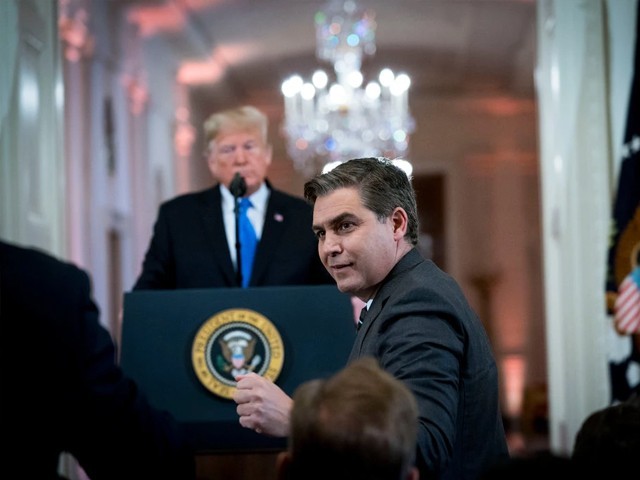 Jim Acosta of CNN during a contentious news conference at the White House on Nov. 7. PHOTO: THE NEW YORK TIMES

As journalism comes under threat in all parts of the world, one is forced to question the role of the ruling governments in the treatment of media and its personnel. Hundreds are being fired in Pakistan, being told “their services are no longer required” as part of a downsizing. However, journalists in the United States face different hostilities.

A CNN White House (WH) correspondent, Jim Acosta was recently humiliated in the US for asking President Donald Trump questions on his campaign regarding the midterm elections in the country. Following the elections, the president orchestrated a news conference to address the loss of the Republicans in the House. Trump’s campaign was based on the influx of immigrants from Central America as caravans threatening the sanctity of the state.

Defending the immigrants and their right to asylum, Acosta challenged Trump’s assertions and was shown what would happen if one were to challenge the status quo.

Acosta continued to interrogate Trump about the Russian investigation, a legitimate question that reporters all over the world ask leaders who are caught in scandals. However, this seemed to have sparked something inside the US President who then called Acosta a “rude, terrible person”. A White House aide ran to Acosta and attempted to snatch the microphone from him when he politely said “pardon me, ma’am”. A video of the incident clearly shows she is continuously trying to grab the microphone from him while frantically turning to assess the president’s reaction.

President Trump to Jim @Acosta: "You should let me run the country. You run CNN."

"That's enough. Put down the mic. CNN should be ashamed of itself having you working for them. You are a rude terrible person." pic.twitter.com/GR9TIbKUok

After the hostile exchange, the ‘home of the free press’, the US, banned Acosta and suspended his hard pass to the White House, a clear and blatant violation of the media. Spokesperson Sarah Huckabee Sanders released a statement saying the government and president value the free press and that “no president in history” has ever entertained so many questions of the press in such a short time.

Defending Trump on his vile behaviour with Acosta, Sanders tried to sway the attention from the gross violation of rights to a shoddy propaganda that Acosta manhandled the intern attempting to snatch the microphone.

“The fact that CNN is proud of the way their employee behaved is not only disgusting, it is an example of their outrageous disregard for everyone, including young women, who work in this administration.”

This is where it becomes more problematic.

Worse than the mistreatment meted out to Acosta was the gross misreporting of the event that followed. The White House outrightly used their intern to make a false case against Acosta. Anybody with a pair of eyes could assess that his behaviour was not “outrageous disregard” but rather the White House had no alternative narrative to protect themselves so they tried to make use of the ongoing debate on sexual harassment.

In a tweet, Sanders attached a doctored video zoomed in on the intern grabbing the mic from Acosta and called it ‘inappropriate’ behaviour. Acosta replied to the tweet and denied her allegations, multiple users on Twitter also denounced Sanders’s childish accusation because it was a malicious attempt to steer the public’s attention away from the actual issue at hand.

We stand by our decision to revoke this individual’s hard pass. We will not tolerate the inappropriate behavior clearly documented in this video. pic.twitter.com/T8X1Ng912y

CNN filed a lawsuit against the White House for using a doctored video and asked for a restraining order on Acosta’s suspension. On Friday, a US court ordered reinstatement of his press card with immediate effect. This is a shining moment for journalists across the world and is symbolic of the rights of journalists. This win is not just for Acosta and CNN but for all those who have been purged for freedom of speech and press. Fox News and multiple news organisations backed CNN’s lawsuit and defended the freedom of press.

Moreover, Acosta outlined the fact that Trump had mistreated multiple other reporters as well. In the same press conference, a woman of colour asked the president a question to which he replied “that is a racist question”, shunning her down and not even acknowledging her question. His treatment of reporters and media personnel knows no bounds and targets anyone who dares to question his authority or decisions echoing of dangerous dictatorship. The flag-carrier of democracy is now slowly moving towards the very monocracy they stand against – oh, the irony!

In no way is it acceptable for one of the ‘biggest superpowers’ in the world to silence journalists and media this way by choosing who gets to ask the questions and what kind of questions. Even in Pakistan, while many governments wish they could have outed media personnel, they never did because they knew it would have huge implications. When former premier Nawaz Sharif was indicted and then disqualified on corruption allegations, our entire media was in a frenzy and many said too much against him. The sitting Pakistan Muslim League-Nawaz (PML-N) government could have toppled the media or silenced them but chose not to because it goes against the basic fundamentals of the field.

When those in power attempt to restrict you from practicing the basic freedom you’re entitled to, the only way is to fight back. The problem is far bigger than one incident, one man or one organisation, it transcends borders and encapsulates everyone in the field.

As a journalist, I’ve also come across moments when those in power have mistreated and misspoken to journalists without having any accountability besides on social media, and this is problematic. Media personnel and journalists serve the people and are responsible to ask questions on behalf of the public. Censoring the media or restricting their access is unacceptable.

As a student pursuing Masters in Journalism, we are being taught each day to ask questions that others can’t or question basic assumptions, and most importantly, to challenge and contain those in power so that they may not be able to abuse their privilege.

The functioning of international relations and media coverage of it has also led to massive criticism of the media where many allege a media bias towards or against the leaders, whether it be US midterms, Brexit, the Yemen war or our prime minister knocking on every door to escape debt.

This is, perhaps, a classic example of abuse of power, and it is something we have observed for many years. Journalists are being tried for treason, being robbed of access and brutally murdered. I remember a time when people said that media and journalism are ‘easy’ career choices as opposed to civil services or corporate jobs. This should serve as a wake-up call to all those because it is far more dangerous to be a journalist right now than most other jobs, and it terrifies me that we continue being treated this way. There should be a worldwide call for the protection of journalists because the problem doesn’t lie in the published words but in the large egos of those in power who cannot deal with opposition.

Trump’s hypocrisy and double standards can also be seen clear as day as he ‘sanctions’ 17 allegedly involved in the murder of renowned Saudi journalist Jamal Khashoggi, while sanctioning journalists in his own country.

Khashoggi’s murder has also raised similar questions as he was a popular critic of the Saudi monarchy. I guess the lesson these tyrants are trying to teach is “speak our language or don’t speak at all”, but they need to know, we will not be silenced, we will not back down and we will continue to tell the truth. Whether they like it or not.