Is Donald Trump even worthy of receiving a Nobel Peace Prize? 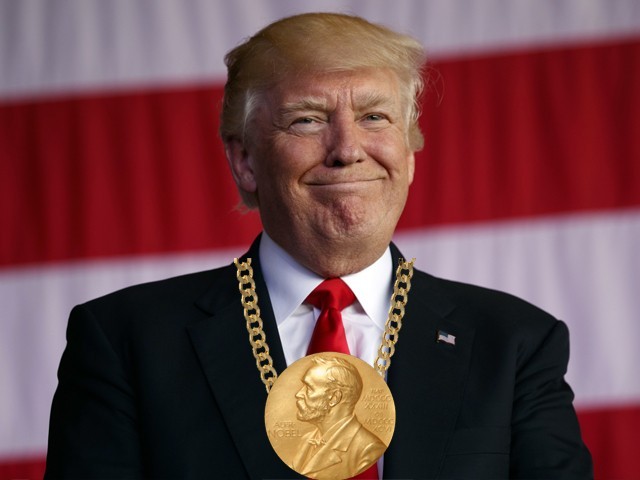 A group of Republicans have written to the Nobel Prize Committee, requesting that Trump be nominated for brokering peace between North and South Korea.

This time, it’s gaining the mother of all civic awards, the Nobel Prize. A group of over eager Republicans, which is Trump’s political party, have written to the Nobel Prize Committee, requesting that Trump be nominated for the Nobel Peace Prize for brokering peace between North and South Korea.

Last week, Kim Jong Un (Supreme Leader of North Korea) and Moon Jae-in (President of South Korea) met in the demilitarised zone (DMZ) that lies between North and South Korea. It was the first of a kind meeting for the two leaders whose countries have been at cold war of sorts since the Korean War in 1953. After the Korean War ended, South Korea has prospered to no end while North Korea has chosen to sequester itself from the world and has gone in reverse in all aspects of society. This meeting was historic in the sense that this was the first time North Korea acknowledged its Southern neighbour. Coming out of the meeting, both leaders began the formal process of peace between the two nations and the denuclearisation of the Korean Peninsula.

First of all, a letter to the Nobel Prize Committee does not mean an official nomination for Trump. Secondly, a meeting between the two Korean leaders does not make Trump a diplomatic genius. This meeting took several diplomatic back channels on behalf of various countries and brokers to come to fruition. Most importantly, if the Nobel Prize Committee were to actually nominate Trump, they would be giving out the award to a man with a shady character and no moral scruples.

For historical context, the Nobel Prize was set up by the Swedish inventor Alfred Nobel. Every year, five winners are picked from fields such as science, social change and literature and given prize money that is presented by the King of Sweden. This money comes from a trust established through the fortune of the Nobel family. Over the course of years, the Nobel Prize has not been without its share of controversies and lost some of the lustre it used to have.

The prize given to American Secretary of State Henry Kissinger in 1973 has been controversial. This was a Nobel Peace Prize and was given out in recognition of Kissinger’s efforts to broker peace between Vietnam and the United States. What is controversial is that both kept engaged in a bloody war even after Kissinger’s efforts and all his diplomacy seemed to have gone down the drain.

Similarly, the Peace Prize in 1994 was given out to Yasser Arafat and Shimon Peres, for their efforts in establishing peace in the Middle East. Unfortunately, peace in the Middle East is still as elusive today as it was back then. Barack Obama was given a Peace Prize when he was inaugurated as the American president the first time. The issue was that Obama didn’t really have any diplomatic credentials at that point – all he had done was run a campaign that highlighted his African roots and encouraged global peace.

The prize is anointed by the Norwegian Nobel Committee. Many a times, when members don’t agree with a selection, they resign from the committee in protest. Unfortunately, that is the most that they can do. Their resignations, while noted, are not high profile or public. The selection process is not transparent and decisions made by the committee cannot be challenged. In the case of the Peace Prize given out to Malala Yousafzai a few years ago, the prize money was split between Malala and Indian activist Kailash Satyarthi. Not taking anything away from Mr Satyarthi, but the general notion among drawing room discussions was that the award was split between a Pakistani and an Indian due to a strong Indian lobby. Another aspect Pakistanis keep questioning is why Abdul Sattar Edhi never got a Nobel Peace Prize, despite his outsized efforts in providing medical care to the common man. There is no logical answer to this.

This year, like everyone else, the Nobel jury has also been hit by the #MeToo movement. Jean-Claude Arnault, a major literary figure in Sweden and spouse to a Nobel committee member, has been accused of sexual misconduct. As the investigation has unravelled, it has come to light that he had leaked names of Nobel laureates while engaging in betting pools. As a result, the Nobel committee has cancelled, for the first time in its history, the Literature Prize for the year 2018.

Coming back to Trump, we all know Trump likes to take credit for everything that is newsworthy, and credit should be given where it is due. In the past year, his verbal sparring with the North Korean dictator Kim has left many politicians and diplomats scratching their heads. For starters, Trump pays an inordinately large amount of attention to Kim. On paper, North Korea is a failed state with no outside contact and is living under constant dictatorship. Trump has resorted to calling Kim derogatory names and constantly challenged him to duels. Kim, the crackpot that he appears to be, has been more than happy to respond with equally demeaning name-calling and dared Trump to attack North Korea.