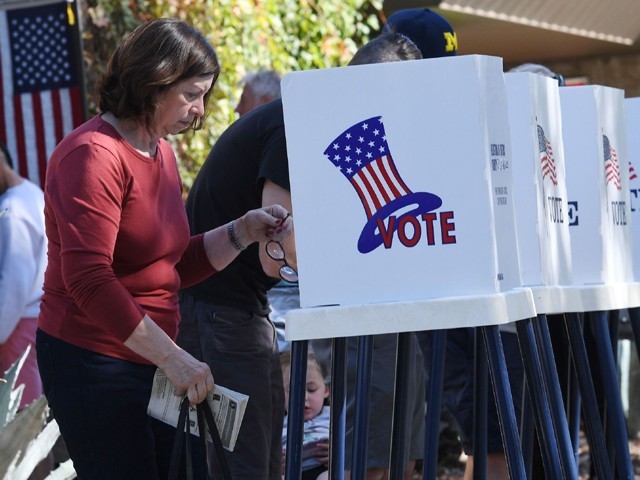 People vote at outdoor booths during early voting for the mid-term elections in Pasadena, California on November 3, 2018. PHOTO: AFP

The November 6th midterm elections was perhaps the most contentious and bitterly contested event in modern US history. As BBC aptly put it:

“Though his name is not on the ballot anywhere across the US, make no mistake – these elections are ALL about Donald Trump.”

The outrageous and mind-boggling campaign run by the Republicans essentially put everything at stake including America’s pride, status as a global power, and standing as the beacon of hope for millions of people around the globe. Trump’s one-man show tried its best to poison his mostly ‘white’ base against people of colour. His unhinged messaging to polarise an already divided nation ensured that America’s perception, both inside and outside the country, would change for the worst for several generations to come.

As the Tree of Life Synagogue’s rabbi said the other day right after the October 27th massacre, these divisive, rhetorical and hateful political campaigns send a loud and clear message to America that,

The hatred spread by Trump across the US mainland only goes to prove beyond doubt that despite being a political underdog, he is now a force to be reckoned with. This has been reinforced by the fact that whosoever Trump campaigned for (especially on the Senate side), those candidates won by considerable margins.

While the Democrats were able to attain majority in the lower chamber of the legislature, that is the House of Representatives, the Republicans kept control of the Senate, the upper chamber. This will obviously result in the change of balance of power paradigm given that the Republicans were in control of both houses since November 2016. The Democrats flipped a number of seats in the House of Representatives by defeating their Republican counterparts. This is, by all means, a very significant defeat for Trump, despite what he says.

Tremendous success tonight. Thank you to all!

Looking ahead, there’s not much that one can look forward to in terms of the improvement in the overall political environment. Trump will remain in office until at least 2020. The midterm elections’ results will only encourage him further to go negative and stoke fears in the minds of his followers.

By winning the House, the Democrats can perhaps use this experience to lay a strong basis of recapturing the Oval Office in 2020. The party has been leaderless and rudderless lately. It took an almighty effort from former President Barack Obama to galvanise people to come out and vote in the midterms. Yet, the much talked about ‘blue wave’ never happened.

However, beyond this point, Obama cannot carry the Democratic Party on his shoulders. The Democrats have their work cut out and need to do plenty of soul searching and look for a plausible set of presidential candidates to combat the Trump tyranny. The House of Representative victory is a minor episode. Right now, for 2020, there’s not much choice other than old timers like Joe Biden, Bernie Sanders and Hillary Clinton. All those names neither have the strength nor the crazy energy that Trump brings to the table. The Democrats need new, young blood; people who are committed enough to bring the party together and go head on with Trump. Sadly, the days of civil discourse and respect are gone in the United States. Starting now, until the 2020 Presidential Election, it’ll be tooth for a tooth and eye for an eye. All bets are off!

There’s been a lot of talk of impeachment if the Democrats won the House. That is not going to happen. With a heft majority in the Senate, Trump’s man in that chamber, Mitch McConnell, will block any effort to oust his master.

The Democrat win proves that politics, no matter what, is still localised in America. Whereas Trump and the Republican emphasised on national security issues, for the Democrat voters, healthcare was something that they wanted their candidates to focus on and improve upon once they get elected. Now with a majority in the House, the Democrats will pose a formidable challenge to Trump’s ambition to abolish Obamacare.

By some accounts, it is irrelevant what the result of the midterm elections turned out to be. What is of real significance is that Trump effectively put two Americas – one liberal and progressive, and the other conservative and change resistant – on a collision course. For what it’s worth, he has completely transformed the Republican Party beyond recognition. The party is, for all intents and purposes, what Trump is and we all know that Trump is perhaps the most scattered-minded man ever to walk on the green planet. Being so, it implies that the Republicans no longer stand for anything, no values and nothing that can connect them closely with the people or understand their problems. Trump is all about winning, spreading controversies and conspiracies. This cannot go on forever as is evident from the House election results from yesterday.

So, here we are done with yet another election cycle. What’s next?

1.  Democrats need to find someone to fight Trump in the 2020 presidential election.

2.  Republicans must decide which direction to take. They can either stay on course and let Trump continue changing the texture and tenor of their values or build a wall of resistance against him to take back their party from his vicious claws.

3. A Democrat victory in the House means they can start investigating Trump’s tax issues, his conflicts of interest, and so on. Most importantly, once the Robert Mueller report comes out, they can perhaps enforce the writ of law against those found guilty by the probe.

For now, we can only speculate. At the expense of sounding like an alarmist and without undermining the process of these elections, the bottom line is that Trump will continue to make it difficult for America, as a nation to live, breath and survive, both domestically and in the international community. Despite advisement, he did not brag about the thriving US economy during the campaign because it was not “exciting” to talk about it. He is the kind of a person who wants public reaction and manipulates and provokes, and takes insanity to the next level. Hence, it is safe to say that while we are done with one insanity of the midterm elections, the next one is just about to begin. It isn’t beyond any stretch of imagination that we might start seeing 2020 campaign ads for Trump’s re-election campaign starting as early as tomorrow or the day after!

If, however, sanity is allowed to prevail, with a divided legislature, this could be an opportunity for the Democrats and the Republicans to work together for the country’s stability and try to resist Trump’s over-zealous plans to eradicate and eliminate immigrants and stop him from spreading hate and animosity in the country.

America is way too polarised internally and has become a laughing stock for the rest of the world. Political leaders must think deeper than their hearts and make a much-needed effort to recapture some of the lost moral high ground. Given the set of precarious circumstances, this seems like too much to ask. Alas, we will all continue to watch a Trump show for at least another two if not the next six years.