The fault in our minds: Bushra Maneka’s attire is her business and choice, and hers alone 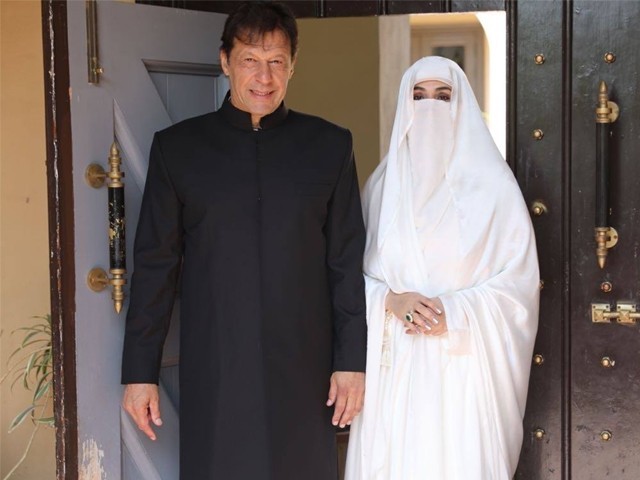 This shouldn’t even be about modesty. It is a simple choice of clothing and that is what it should be taken as. PHOTO: FACEBOOK/ PTI OFFICIAL

While Pakistan’s political fate is changing, the people of this nation believe there is something more important that needs to be focused on. Yes, unfortunately, that topic is Bushra Maneka’s choice of attire.

This is not the first time that women’s choice of clothing has become a hot topic of discussion. As a confused country, it seems as though we are never content with anything. When Mahira Khan was spotted in a backless dress with Ranbir Kapoor, people bashed her for wearing a revealing outfit. And here we are, a year later, and we still cannot seem to decide whether we are liberal and progressive or religious and conventional, considering Maneka’s burqa also seems to scare people.

We criticize Mahira for smoking and wearing minimal clothes but we ALSO mock Bushra Maneka for her modest choices. What do we want?

I’ve read a lot of comments regarding this lately and those who are defending Maneka are constantly using the “modest” rhetoric to present their arguments, which I believe is equally problematic. Firstly, “modesty” looks differently for different people because it depends on what exactly they are comfortable wearing, so defining the burqa as the symbol of modesty sends out the misrepresented idea of the term itself.

Secondly, this shouldn’t even be about modesty. It is a simple choice of clothing and that is what it should be taken as.

In a world where nudity is power,being modest takes courage,Bushra Bibi is truly an inspiration,utter respect for this brave and graceful lady. pic.twitter.com/QNfOE3kZpq

I fail to understand why women’s clothing is turned into political battles to be fought over when there are larger issues at hand that need our dire attention. Isolating the burqa or purdah to scrutinise or ridicule women is a shameful act and displays people’s ignorance about the impact and role of the purdah, historically, religiously and culturally. As Ziba Mir-Hoesseni, a legal anthropologist, states in her work, Women and politics in post-Khomeini Iran. Divorce, veiling and emerging feminist voices, the rationale behind the veil or the purdah is very complex and has different reasons including, class, region, nationality and culture. More specifically, these categories could be religious, psychological, choice of authentic dress, political, Islamisation of the society, economic, status symbol or protection from public gaze. From a feminist approach, the purdah in fact can be an empowering tool for some as it grants protection and freedom of action for women, to embrace their identity and to give access to public space for economic independence and education.

Bushra bibi is allowed to wear whatever she wants- that’s her choice. What’s unfortunate is that freedom of choice is only respected and defended when the choice is modest.

Secondly, fabricating the veil or purdah as regressive is what led western imperialism and post-colonial narratives to justify the vicious nature of Muslims. In fact, the stereotypical image of the burqa-clad Afghan woman has been used to justify and legitimise the US war in Afghanistan. This has been critiqued in detail by Gayatri Chakravorty Spivak, an Indian scholar, literary theorist and feminist critic, who offers the sentence, “white men are saving brown women from brown men” in order to understand the relationship between the colonised and the coloniser in a deadly competition to win power.

In this case, the reason for “saving” brown women from brown men is that Muslim women have their agency forcibly revoked by barbaric Muslim men. This is factual for the Afghan Taliban since they forced women to wear the burqa and killed those women who protested against it. Still, it is crucial to note that a piece of clothing is not naturally repressive. The extent to which the burqa becomes an oppressive act of purdah depends on contextually-specific extremist interpretation of Islam, misogyny and patriarchy.

What is wrong with people and their obsession with burqa? How does one feel insulted by the choice others make? (voluntarily yet); Bushra Bibi believes it’s modest enough for her, let her do it; and you do your thing.

Likewise, there are some people that believe Maneka’s burqa would portray a negative image of Pakistan in the international realm. Like I’ve stated above, the stereotypical perception of the burqa is very limiting and more importantly, let’s not forget that there is a growing number of rape cases, targeted killings, disappearances, sectarian issues, and many other types of discrimination that will most certainly reflect negatively on Pakistan’s reputation as a country more than Maneka’s burqa.

She has every right to wear what she wants but as the wife of Pakistan’s leader, she represents all Pakistani women.

When the international community sees Pakistan as a regressive state that oppresses women, this is not the greatest representation of Pakistani women. pic.twitter.com/3k1XxRRmnS

Having said that, it is extremely important to educate oneself thoroughly on a topic before one becomes a self-proclaimed expert on it on social media. What a woman decides to wear has now become a phenomenon worth arguing over, showing just how petty our thinking is. Men have generally always been extremely interested in and critical of women’s choice of clothing, especially the conservative religious clerics who think they have the deciding power to declare someone a non-Muslim just based on their attire.

However, what saddens me most is reading comments by women who are bringing down Maneka. This doesn’t even have anything to do with feminism, it is just natural courtesy for women to support other women, considering that any one of us could be made a target of such trolling and bullying in the future.

It speaks more about those people who are disgustingly attacking Imran Khan for his wife's choice of clothing, than the person they attack. Choice of dressing doesn't dictate how progressive or regressive one's mindset is. Discuss his policies, not what his wife wears!

I do not know Maneka personally, nor am I affiliated with Pakistan Tehreek-e-Insaf (PTI) in any way, which is why I think it is important for me to talk about this; because I am a woman and I know just how imperative it is to support choices of other women. As long as Maneka does not impose this dress code on the women of this nation, it is safe to say that her decision to observe purdah is strictly justified.

Let’s defy and oppose these typical conversations surrounding Maneka’s choice to wear a veil because they belittle and reduce her to her clothing. In an already patriarchal society, where women’s bodies are moralised based on what they wear, let’s try to comprehend just how critical it is to let go of these static viewpoints and attitudes.