Can Islam and democracy coexist in today’s world? 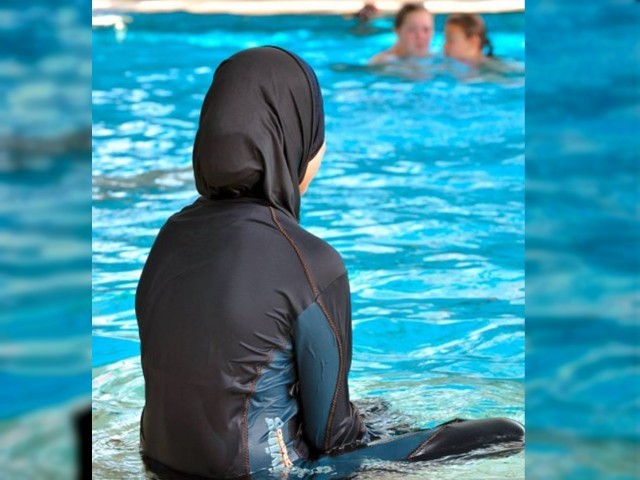 A Muslim student wears a so-called 'Burqini,' a full-body swimsuit, at a swimming pool in Freiburg, southern Germany. PHOTO: AFP

Germany has given its verdict and elected Angela Merkel for the fourth consecutive term. Her victory has relieved many as her popularity took a nosedive after her brave decision to take in refugees in 2015. However, at the same time, the reduced margin of her victory has also raised alarms.

The German far-right party, Alternative for Germany (AfD), has accumulated 13% of the total votes, becoming the first such party to win so many seats in more than 50 years. The improvement in its vote tally is remarkable, given the fact that it only won 4.7% of the total votes in the 2013 elections, narrowly missing the 5% threshold required for winning seats in the Bundestag, the German federal legislative assembly. This time, the party won 94 seats and its performance has even forced to make Merkel acknowledge the “concerns” of its voters.

Founded in 2013, initially as an “anti-Euro” party, AfD subsequently changed its focus in 2015 towards Muslim refugees, after Merkel’s decision to accept them. Immediately, AfD found acceptance and their hateful rhetoric against Muslims became one of the highlights of their campaign. Soon after, the entirety of Berlin was plastered with bright posters highlighting the following sexist and racist slogan, “Burqas? We prefer bikinis”.

Backlash against immigration often has a lot to do with fears about losing economic privileges such as jobs and welfare benefits. However, in this case, the perceived cultural differences between immigrants and the West played a significant role.

AfD tried to convince Germans that Islam was not a part of Germany. AfD’s co-leader, Alexander Gauland, went on to say that Islam is incompatible with a free democratic order. Furthermore, he claimed that he feared the Islamisation of Germany due to the influx of so many Muslim refugees. It is clear that these views have resonated with a significant part of the German electorate. However, to what extent are these views actually supported by actual evidence?

Can a million refugees actually Islamise an entire country? Is Islam incompatible with a free democratic order? To what extent are these security fears justified?

Let me candidly admit that some of the security-related concerns do hold some validity. Most of the refugees are coming from war-torn Syria and therefore, chances that Islamic State (IS) members may be amongst them cannot be ruled out.

In fact, there is evidence that IS successfully smuggled several of its members who went on to conduct terrorist activities in France. Although the number of such potential attackers remain exceedingly small, but due to the huge influx of refugees in a short period, it has become extremely difficult to vet their backgrounds properly and in time. Due to this problem, the threat and fear of terrorism has increased in Germany.

While the security concerns are valid, the rhetoric of AfD would actually prove counterproductive. Painting the entire Muslim community with the same brush and whipping hate against it will in fact fuel radicalisation as opposed to countering it.

AfD’s case about the possible threat of Islamisation of Germany is somewhat exaggerated. A million refugees, even if they are deeply religious, cannot Islamise a country with a population of over 82 million. Furthermore, a majority of the Muslims live in ghettos and do not integrate with the rest of the society. While this isolation leads to various other problems – alienation, lack of proper integration and even radicalisation – it does not facilitate the so-called Islamisation of Germany.

In fact, before the recent influx of refugees, Germany was already home to around four million Muslims. While most of those Muslims are religiously conservative and have failed to integrate properly, by no stretch of imagination have they managed to Islamise Germany.

Burqas and headscarves have also attracted a lot of attention and have been used as examples of a threat to western values. While I agree that these clothing articles are not compatible with western culture, they also do not threaten the freedom of others. If you compare an act that is personal, such as wearing a veil, you have to differentiate it with an act that infringes upon the freedom and security of others. In this case, a burqa or headscarf does not affect anyone but the person wearing it. Personally, I do not endorse the burqa as I think that it is a sign of patriarchy.

The extent of Islamic countries’ lack of democratic progress was also noted by the president of FH, Adrian Karatnycky, in 2001. Remarking on the relative dismal performance of Muslim majority countries, he noted that “non-Islamic state is nearly three times more likely to be democratic than an Islamic state. Furthermore, none of the 16 Arab states is an electoral democracy”.

In his opinion, the third wave of democratisation had virtually left the Islamic world and its Arabic core untouched. Some empirical studies have also confirmed this negative relationship. Particularly problematic is the fact that even Muslim democracies are not exactly liberal democracies. A liberal democracy is qualitatively distinct from an electoral democracy as the former instead of merely relying on majority votes also stresses upon individual freedom, minority rights and gender balance.

While the above facts portray a rather sombre picture, there is no reason to believe that Muslim countries are inherently incapable of transitioning to a democracy. It should be remembered that once even Catholicism was thought to be inimical to democracy. Gradually, catholic countries also made a transition. Thus, there is hope.

More importantly, while one can argue whether Muslim majority countries are democratically deficient or not, there is no reason to believe that ordinary Muslims cannot live and contribute to a liberal democracy. In countries such as the US, Canada and Britain, a large number of Muslims are living under liberal democracies and making important contributions.

Some of the problems that spring up in European countries are mainly because of the notion that Muslims are the excluded minority and discriminated against due to their faith. Alienating them further through a hateful rhetoric will merely worsen the problem, not alleviate it.