Feminism needs to cater to Muslim women, not the other way around 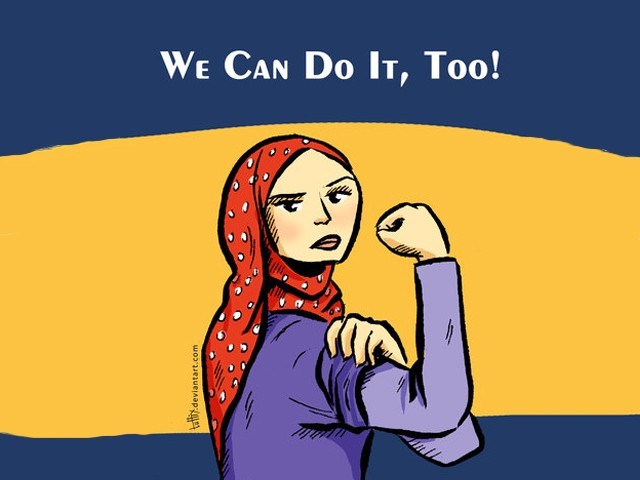 Mainstream, western feminism isn’t always intersectional. There are feminists who often don’t realise or can’t relate to the fact that for women of colour, of different faiths, abilities, it’s not just gender that they’re discriminated on.

Such women are affected by these circumstances professionally, socially and mentally, and yet don’t always receive the help and support that’s needed. Issues are all too often seen through white lenses and how they affect white women, such as the gender pay gap, sexual harassment, eating disorders, and everyday sexism. We don’t see many platforms which seek out Muslim women’s experiences of these topics. Think of the countless articles, research pieces, features that looked at sexual assault, post #MeToo; how many of those included Muslim women’s stories? Given the wide scope of women affected by sexual misconduct, there were definitely Muslim women who were affected, so why have we not heard any of their voices?

There have been many discussions about the age we should enforce sex education, for example, but do we ever see Muslim women being given a platform to discuss when they think it’s a good idea? The problem is that a large chunk of western, 21st century feminism seems to be white feminism (meaning feminists who prioritise topical issues that affect white women and exclude the experiences of women of colour). And that’s because white voices are amplified the most when it comes to women’s issues, or given a white face/representative of it. I don’t say that lightly. Of course, there are the intersectional ones, the comrades, the ones who get it, but they’re rare and few.

Someone like me, who doesn’t wear a headscarf, might be accepted into mainstream feminist circles in our shared fight to deconstruct the patriarchy. That’s partly because the headscarf is seen as a patriarchal imposition. Iman, who also doesn’t wear a hijab, feels the same way. She tells Metro Uk:

“I feel like someone who looks like me would be more welcome in feminist circles (if you exclude my blackness, which is a whole other story) than a woman in niqab.

I think like many other things in the West, a lot of political and social movements have been defined through a white-centric lens, and feminism is the same, that makes it difficult for anyone who is classified as non-white/middle class/educated to fit in. Personally, I feel like feminism is about choice – and covering is a part of that.

Ultimately, the aim should be that all women feel comfortable expressing themselves that is authentic to them and makes them happy without feeling the need to explain themselves.”

Feminism often feels like it only accepts those who look like they subscribe to its ideals. Someone in a burka/niqab isn’t seen as having agency therefore is pitied or only accepted if their fight is against the religious imposition. A Muslim woman who not only wears a headscarf, but a burka, a niqab, and/or who has conservative views about sex and sexuality, is not usually accepted into feminist groups as easily because the idea is that Islam is inherently oppressive and the only way to be liberated is to become more liberal and that’s usually synonymous with ‘western’.

But Muslim women shouldn’t need to conform to western ideals and show that they’re Muslim but they’re not that religious, that they date against their parents’ will, that they’re sexually liberated, to be accepted.

Muslim women shouldn’t need to water down religion and culture to be accepted. Why should we as feminists only unite because of commonality? Yes, Muslims don’t believe in sex before marriage, we believe in modesty (for both men and women), we live in patriarchal communities (which society doesn’t?), and Muslim men are allowed to marry four times (if they can live by its terms and conditions). These things might not scream freedom and agency to a lot of people, but it works for Muslims, while some of it doesn’t.

Muslims are not a monolith and you’ll come across every type under the sun. The point is, people should be equally receptive of a person, no matter what their beliefs. The western feminist movement should be able to deal with the idea that some women believe in things that might otherwise contradict their idea of feminist thought, like the headscarf.

If we’re supposed to be all about choice and letting women (and also men) do what they want with their bodies, why do we have a problem when they want to cover it up? Sure, not all women are afforded the luxury of choice and not all have agency, and we should support them too. But some choose to cover up, to obey God. Many women are empowered by hijab, by religion, and these women need to have their narrative accepted.

Submission is a big part of Islam, we submit to Allah, our God. We do things, sometimes without question to please Him. I get that the idea of submission isn’t seen as a free concept, and may even seem like an antithesis to freedom itself. But we’ve got to respect that people are exercising their free will when they choose who to submit to. Some of us are perfectly happy to subscribe to such ideals, and that deserves some respect.

One woman might want to become a homemaker, another might want to be a sex worker. One girl might grow up, waiting her whole life wanting to get married. And maybe one of them wants to serve God and be a nun or a Muslim. Let’s accept them all. The point is, let’s support and stand for all kinds of women, even the ones who choose to do things you don’t agree with, as long as they’re not hurting themselves or anyone else.

And no, believing in God, if done properly, is not hurting anyone.

The author is a lifestyle writer at Metro.co.uk. She tweets @faimabakar (twitter.com/FaimaBakar)