Is PTI trying to wreck the civil-military balance for their own selfish gains? 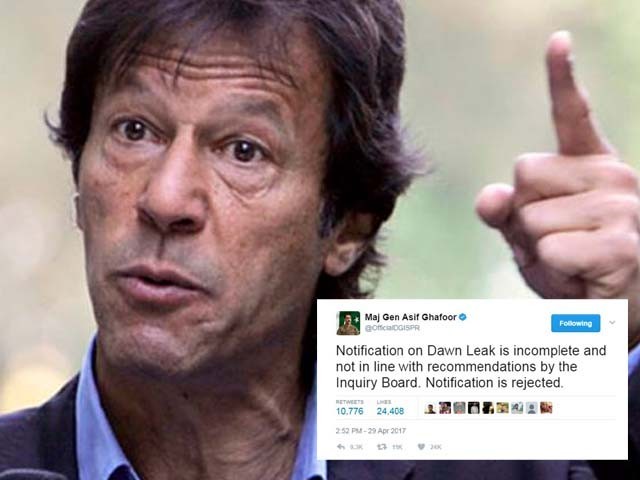 Of course, this resolution of the issue is not something which an increasingly desperate PTI can accept and they are making it known.

As someone who is in the process of doing a PhD in political science, I am naturally passionate about the political matters of Pakistan. Although my research interests are eclectic and include topics like gender, religious minorities and current affairs, my special concentration is on the civil-military relationship. I do think that Pakistan cannot build proper political institutions without rectifying the civil-military imbalance.

The rectification of the civil-military imbalance, of course, requires political maturity and competence from the civilian leadership. To simply blame the armed forces is an oversimplified and clichéd explanation. In Pakistan’s case, the civil-military balance has historic origins dating back from the first decade after its independence. It emerged due to an interaction between external factors such as high threat environments and internal turmoil exacerbated by a weak political class and its incompetency.

After Zulfikar Ali Bhutto’s dismissal in 1977, the military, for the most part, remained in charge either directly or indirectly till 2008. Starting from 2008, the civil-military balance has been more fluid, though arguably military still has an upper hand.

The post-2008 period has nevertheless witnessed increased professionalism by the military leadership, and both General Ashfaq Parvez Kayani and General Raheel Sharif, resisted temptations of overthrowing the governments. Gradually, the civil-military imbalance has been getting rectified, though we continue to witness an occasional hiccup.

The ‘Dawn leaks’ was one of these hiccups. Irrespective of the fact whoever the “culprit” behind the leak was, this episode soured relations between the civilian and military leaderships. Nevertheless, the issue would not have gotten so out of hand if some of the TV anchors on the electronic media and the Pakistan Tehreek-e-Insaf (PTI) on the political front had not played a negative role. Over the past seven months, PTI and some TV anchors have constantly tried to whip up the issue and drive a wedge between the civilian and military leaderships.

Knowing that they cannot win the elections in 2018, the Dawn leaks and the Panama case became PTI’s last hope and the party has continued to whip those up irrespective of the fact that these are not really important issues. It has openly asked for military intervention and gone for the judicial route in order to remove the government. Throughout the judicial proceedings, PTI and its leadership tried to give the impression that the verdict would overwhelmingly favour them.

After the Panama verdict on April 20, 2017, which did not give PTI the kind of “victory” it was looking for, the party shifted its focus back to the Dawn leaks. In this regard, it got its opportunity due to the furore caused by that infamous tweet by ISPR DG Major General Asif Ghafoor.

Notification on Dawn Leak is incomplete and not in line with recommendations by the Inquiry Board. Notification is rejected.

The tweet was a clear indication that civil-military ties were worsening and PTI, its leadership and a few TV anchors started to further exacerbate the situation by indulging in making provocative statements. One can hate the Pakistan Muslim League-Nawaz (PML-N) and Nawaz Sharif, but he is an elected prime minister and embodies the collective mandate of the people of Pakistan. Cheering that tweet and issuing controversial statements was extremely irrational and dangerous, but regrettably, PTI and even the Pakistan Peoples Party (PPP) indulged in it.

PTI’s expectations were of an open confrontation between the civilian and military authorities and a subsequent removal of the former. However, thankfully, the present Chief of Army Staff (COAS) General Qamar Javed Bajwa acted quite sensibly, and instead of getting drawn into a confrontation, he has actually diffused the situation.

#DawnLeaks people who say "Thank you Raheel Sharif" now abusing Pak Army just for the sake of PM chair. They just want govt. on any cost.

All reasonable and politically sensible Pakistanis have welcomed this new development which has avoided confrontation between the institutions and prevented the polity from becoming instable.

This is OUR army, our own sons, brothers. Army knows its strongest asset is nation's trust.#PakArmy #ArmyChief #DawnLeaks pic.twitter.com/7ws5iz1ZLs

#dawnleaks was a non issue to begin with. Ego battles never good for the country. Great that sanity prevails. Hugely positive 4 Pakistan pic.twitter.com/279v8SxBpa

Of course, this resolution of the issue is not something which an increasingly desperate PTI can accept and they are making it known. Their party leaders have again issued controversial statements while their trolls on social media have gone completely berserk and are openly calling the settlement some sort of shady “deal”. Many have started to abuse the Pakistani military and are accusing them of selling out.

The irony is that the Pakistani military is getting abused for actually resolving an explosive situation here. Some of the tweets (which cannot be shared) from fake accounts have even made filthy references to the families of General Bajwa and Maj Gen Ghafoor.

All this fanatic behaviour is deeply disturbing and shows that the party and its followers are merely prioritising power over everything else and are ready to doubt even rational steps which diffuse the situation.

I think it would be better for the party and the hordes of its impressionable followers to concentrate on real issues and prepare for the elections next year. Their success chances will hinge upon how well they have governed in Khyber-Pakhtunkhwa (K-P) and also on the present government’s governance shortcomings. If they exploit the real issues politically, they will be victorious. However, constantly trying to take shortcuts will not only prove problematic for the country but also hurt them politically.