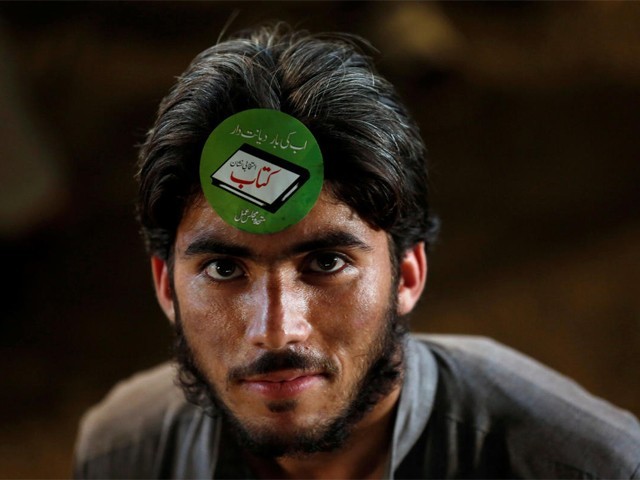 A supporter of the Muttahida Majlis-e-Amal (MMA) adorns an electoral sticker during a campaign rally, ahead of general elections in Karachi, Pakistan July 15, 2018. PHOTO: REUTERS

On July 25th, Pakistan’s fate, at least for the next five years, will be in its own hands. The future will come down to all of us as we make certain choices in that polling booth. Some of us will still be thinking, weighing pros and cons, measuring the benefits, and calculating the risks. But most of us would have likely made up our minds on who to vote for before judgement day.

The next day, Pakistan, a sovereign state since 1947, will see only the second successive transition in democratic power.

But I have a question: are all people informed enough to decide the fate? Are all voters equally aware of the choices they will make, and their repercussions?

The only requirement is that you need to have a national identity card (NIC), effectively making anyone over 18 years of age eligible to decide the country’s destiny.

But if we were to add the requirement of having a matriculation/high school certificate at the time of casting the vote. Critics would argue this is impractical, and would needlessly eliminate a huge portion of the population.

The counter is that this need not be a requirement for the next elections. Make it a vision 2028 or 2033. Make it a long-term plan for the next 20 years, giving enough time for elected members to build schools in their constituencies, provide thousands of jobs to teachers, clerical staff, senior management and construction workers. Add to the country’s gross domestic product (GDP) through more work for the construction, steel, and services industries.

Moreover, a matriculation only requires 12 years of education. I am being generous when I say give them 20 years. Take the extra eight for construction, enrolment and awareness.

Some would now say Pakistan doesn’t have the budget for such a programme. The country spends close to Rs700 billion on education, roughly 2% of GDP, on the sector each year. Still, the literacy rate in the country is no better than 58%. According to a report published a few years ago, largely due to the fact that education is not a widely reported topic, as many as 66% of children in Balochistan and 51% in Sindh are out of school, followed by Punjab and Khyber Pakhtunkhwa (K-P) with 47% and 34%, respectively. These are estimated figures, and by no means capture the scenario. The literacy rate of 58% is an astronomically exaggerated figure even by the definition of the ability of a person to read and write a simple letter with understanding in any language.

So where does the money go? If even Rs700 billion isn’t enough, I don’t know what will be.

If its falls short, open accounts in banking institutions. You want to crowdfund a dam. How about you crowdfund education!

Worried about getting teachers to go to far-flung areas? How about you use the same students who have recently passed or finished their education by offering them jobs as teachers in the same school. You have created jobs straightaway.

Never mind Pakistan’s millennium development goals or the sustainable development goals. Forget those. The country hasn’t met them, and probably won’t. But you put the requirement of a high school or matriculation certificate to casting a vote, and all election candidates vying for a place in the elections will look to increase school enrolment and literacy levels in their constituencies.

It may give current elected members a headstart, but increasing awareness through education means the voter can no longer be fooled by cosmetic measures. The voter is now a much more aware, much more educated, and a much more informed person before stepping into the ballot box.

The Constitution of Pakistan guarantees education to every child aged five-16 years, and you know what, it is free and compulsory.

But at the end of the day, Pakistan will never implement any step that would put it on the path of growth, prosperity and sustainable development. We will argue, fight, abuse and remain in misery. For this is our curse. We have lived it for 71 years, and we will continue to do so. We lack the will to sacrifice.

The writer is a business analyst.