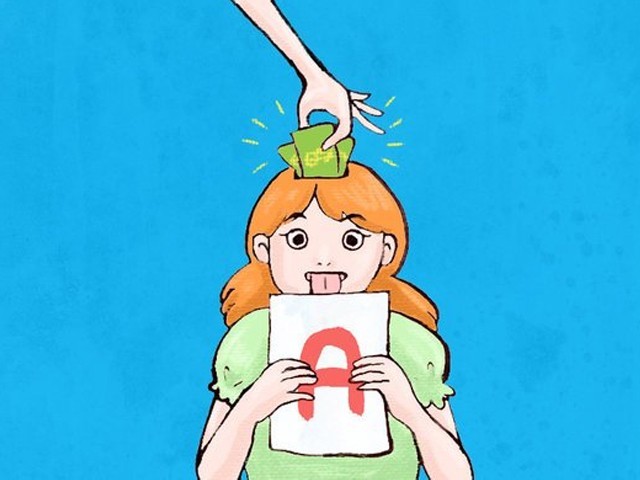 It would be fair to say that our private education system is in tatters, producing drones that are great at rote-learning. ILLUSTRATION: ALLISON STEEN

Over the past few years, the policy on education has taken centre stage in Pakistan. There is now debate over reforming the curriculum of madrassas, as they have failed millions of students who have, and continue to receive, their education in these religious seminaries.

However, it is not just the madrassas that need reform, but also the ‘elite’ private school system. I have been teaching part-time in Karachi’s private sector for almost a decade, and it is blatantly clear that the current system has failed miserably. Be it private universities or schools, few understand or are interested in the purpose of education itself.

The main objective of education is to help people understand how the world works, so they can improve upon it. On a ‘micro’ level, it is about understanding ‘cause and effect’ in both, the natural and social spheres. We cannot build infrastructure without understanding the laws of nature. Similarly, to reform human behaviour, we first need to identify the true determinants of individuals or group action. This knowledge can then be used to achieve various goals, paving the way for personal and societal progress.

Whether the aim is to produce a population that values liberty, pluralism, tolerance, non-violence, or building spaceships – the key nonetheless lies within the academic system. There needs to be absolute clarity in the minds of the management, teachers and students – as well as in the wider society – about the aforementioned role of education, because vague or unclear ideas will fail to incentivise the behaviour of the various stakeholders.

Unfortunately, for most students, education is just about getting a report card, certificate, degree, and so on, that will propel them to the next stage within the system. It is about getting a 4.0 GPA, or an ‘A’ grade, but not about the act of learning. There is no attempt to understand the real world – education has simply turned into a black box that students acquire before entering the job market. However, students alone cannot be blamed for this. It is the schools and universities that have failed them.

For example, schools often force students to take ‘easy’ subjects they do not want to take; those that do not even fit their requirements with respect to their interests, aims and ambitions. The reason is simple: schools want ‘A’ grades so that they can improve their image, which would attract more students and help the school make more money.

Therefore, when a student makes a request to take Economics, they are often advised to take Business Management instead. Someone who wants to study English Literature is advised to take Urdu. If the student is reluctant to acquiesce to the school’s request, they are then told to take the subject privately.

The school will not give students subjects they might find interesting, if they fear it will lead to a poor grade (a ‘C’), and thus adversely affect the image of the school. Nor will they help a struggling student with a tough subject, because that would mean putting in more teaching hours, which would increase costs. It’s always better to just give the student Urdu. Private schools and universities in Karachi today have become business enterprises. Their objective is to make profit, not to educate. For these businesses, it’s the bottom line that matters.

Even with respect to classroom teaching, the focus is on ‘notes’, not books. The aim is to memorise past paper questions, and then identify suitable answers to those questions from the notes, instead of actually reading the book and learning. This has had visible consequences for our society as we increasingly rely on foreign countries, lacking the skill set in our own environment to fulfil our needs. An anecdotal example would be the Shershah bridge disaster, where we had to call in the Japanese to redesign our bridge.

This is an unfortunate result of an education system geared towards making money. How can such a system produce an educated populace? What it does produce, however, is wealth, which explains the explosion in the growth of private schools and universities across Karachi.

The aforementioned system has produced hundreds of thousands of students, all of whom have excellent grades, but have extremely poor comprehension and weak expression. It would be fair to say that our private education system is in tatters, producing drones that are great at rote-learning.

Most students realise this when they go abroad to study. Their first year is the toughest, because the ‘notes’ system simply does not work. This is usually the first time they actually open a book, and begin their process of ‘meaningful learning’. For the majority, who have to continue their education in local universities, it’s a repeat of the same process, but this time with a different set of books and teachers.

On an individual level, I’ve tried to combat some of the issues by eliminating the use of teacher’s notes in class. The students are instructed to read the book and make their notes, which is the only way of improving their skill set. It is a transition which students find extremely difficult, at times even offering money in return for notes or model answers.

Additionally, I’ve recommended that parents test their children at home, by asking them to summarise pages from a non-academic book in their own words. Even the readers of this piece can conduct a similar test (ask your children to summarise George Orwell’s essay on “Politics and the English Language”), which would indicate, albeit partially, the intellectual level of the children upon whom a mini fortune has been spent.

I hope my article dispels the myth prevalent in our society that the elite private education system is doing a better job than our religious schools, as for them, it is all about money and grades. If the government is indeed serious about reform, it will have to be across the board, not ad hoc or selective reform that ignores private schools openly gambling with the future of our children.