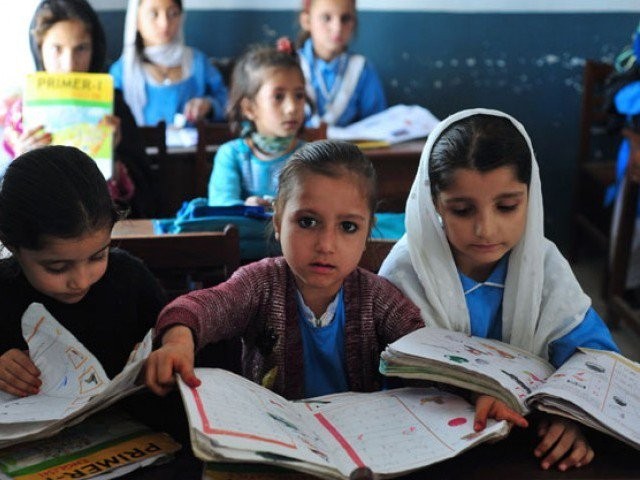 Only 58% of the population is literate; this is a major cause of concern. PHOTO: AFP

Pakistan has one of the largest youth population in the world. Forty-six million of these will be voting for the first time in about two weeks; a number that is by no means small. To put it into perspective, if these voters were a country, they would be the 30th largest country in the world in terms of population. They will most likely vote for the party that has promised them jobs, and no one can fault that logic because jobs get you money and as we all know, money makes the world go around. But there is a slight snag in achieving this – education.

The definition of an educated person in Pakistan is someone who can read and write their name, irrespective of the language it is in. Due to this, only 58% of the population is literate; this is a major cause of concern. However, on the bright side, research has shown that countries with low literacy rate have a higher economic growth when they invest in primary and secondary education as compared to higher education. So we might have a chance to turn things around in our favour.

If we listen to the rhetoric going around in the country, people are collecting money for dams, there is talk of water shortages, corruption, economy being in dire straits and the China-Pakistan Economic Corridor (CPEC), but there is a deafening silence when it comes to education. Taking a look at the party manifestos, all of the three major parties have made some promises over education but it isn’t that high on the priority list. The topic of  education is way down on each manifesto preceded by CPEC, agriculture, water and infrastructure amongst other things. While all parties have made a promise of education for all, it hasn’t been explained how that will come to pass. They have promised increasing the education budget to 5% of the Gross Domestic Product (GDP) but that is a promise that we have been hearing for the past decade.

The only way the country can progress is by investing in its young; we have heard Quaid-e-Azam’s famous August 11th speech but the part that is least discussed goes,

“Now that we are free we must spend one-fifth of our national resources on educating the poor, or else each government will be more corrupt than the last, leading ultimately to the demise of the State.”

This literally highlights the importance of education and the part it plays in nation building. Singapore has strengthened itself as a nation because its first prime minister, Lee Kuan Yew, focused on human capital development, not just infrastructure.

If we talk about CPEC, “the game changer”, there was an event held at the Lahore University of Management Sciences (LUMS) called [email protected] Experts gathered to imagine what Pakistan will look like on its 100th birthday; Mosharraf Zaidi presented an infographic comparing the education scores of the western route and eastern route of CPEC. The eastern route has far superior scores compared to the western route; there is dire need for immediate investment, and that is an understatement of the century.

All the manifestos have strong promises but none of them talk about the blatant inequality and how the population living on the western route would catch up with the eastern route.

Gender inequality in education is an issue as well, with only the Pakistan Muslim League-Nawaz (PML-N) explicitly stating they will invest in female education, while the other two parties have simply mentioned education for all.

While it is true that education should be for all, there is a huge problem with female education in the country, a problem no one is willing to talk about. There are large parts of the country where women are not allowed to attain education, they are either told to help out with work or they are married off early. There is also a large percentage of women who opt for the medical profession but most of them don’t practice further. It is important that this imbalance is addressed because studies have shown that investing in female education has a higher rate of return as compared to male education, especially at the secondary and tertiary level.

The world has entered the fourth Industrial Revolution, and with the discussion around the changing nature of future jobs, the Pakistani education sector is at risk. The current setup is not equipped with the necessary tools to impart job skills that will be needed by the population.

The world is looking into 3D printing, robotics and other ways to cut down on manufacturing costs, this changes the need for low skilled jobs. It was believed in the 1930s that there would be technological unemployment, however, that actually led to more employment. But that was in the past and the future might prove that belief true. The real question is where will Pakistan be when all of this takes effect? Will Pakistan lie on the side that loses these jobs or the one that gains them? What will happen to the manufacturing sector in Pakistan?

Wages are going up in China, Pakistan can attract low skilled jobs but that will only be a race to the bottom for its people and there are not enough people addressing this problem. Pakistan has one of the fastest growing internet consumer bases in the world coupled with a young population, this is an opportunity that must not be missed.

Pakistan has to invest in quality education because just throwing money into the education sector will not produce results. Investing intelligently and prioritising quality over quantity will help bear fruit, the quality of schooling matters rather than years of education.