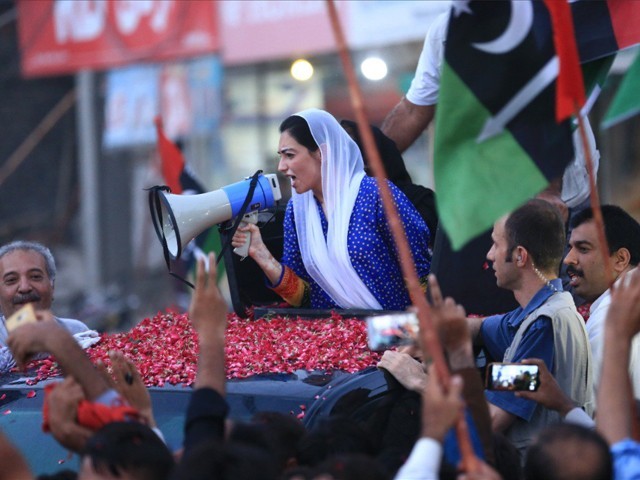 Aseefa's sheer passion for politics and her ability to revolt against current party leaders shows she has a mind of her own that enables her to ask the right questions. PHOTO: TWITTER/ MEDIA CELL PPP

In many ways, the Pakistan Peoples Party (PPP) has been a progressive political force for this country. The development and implementation of a democratic constitution by Zulfiqar Ali Bhutto (albeit flawed); the party’s staunch opposition against dictatorship; the fact that PPP gave Pakistan and the Muslim world its first female prime minister – all these factors have portrayed PPP in a forward-thinking, amicable light.

Hence, it comes as a shock that a party that was led by a woman for more than 20 years is finding it difficult to provide her daughter a nomination ticket for the General Assembly.

#LARKANA: Aseefa Bhutto Zardari is addressing a corner meeting of ladies in Larkano in connection with the election campaign of Chairman #PPP @BBhuttoZardari for NA-200 on Friday. pic.twitter.com/22rVMdhM2a

Living in a patriarchal society, this might not be an issue for most who dwell in Pakistan. This sight is all too common for them – the son getting a bigger platform to showcase his skills whereas the daughter is side-lined to a smaller stage, overshadowed by her brother. But should we expect the same trend from one of the biggest political parties in the country? Is this acceptable treatment for the daughter of a woman who broke the highest glass ceiling in Pakistani politics?

Moreover, this is unfair treatment towards Aseefa, not just by virtue of her being a woman or Benazir Bhutto’s daughter. Over the past few years, Aseefa has shown her merit to become a formidable leader for the party. She has raised her voice for party workers, questioned her father’s choices, and shown great interest in the politics of her country. The case is not the same for her other siblings; in fact, Bilawal was criticised during the 2013 Elections for his lacklustre presence, which might have caused further damage to the party, combined with his father’s dismal performance in the prior tenure.

Aseefa has a more charismatic personality compared to Bilawal. Her sheer passion for politics and her ability to revolt against current party leaders shows she has a mind of her own that enables her to ask the right questions. Calling out Khursheed Shah, a senior PPP leader, for his sexist remarks against fellow female MPAs during a parliamentary session, showed that Aseefa was willing to challenge archaic and sexist notions, even when they stemmed from her own party.

Her public disapproval of her father’s choice to include Irfanullah Marwat, who has been a controversial figure for PPP workers because of his role against them in the Pakistan Muslim League-Nawaz (PML-N) government’s tenure of 1990-93, showed that she is not hesitant to stand up against her father and his rather shady approach to politics. This also highlighted her commitment to follow her mother’s legacy.

In opposition, Bilawal has rarely been seen asserting his will or influence, even though he is the chairperson of the party.

Additionally, Aseefa has tried to expand her role and discuss issues related to health and education. Having a Master’s degree in Global Health and Development, she has the technical knowledge required to push for developmental programmes that would benefit her people. Being the United Nations Children’s Fund (UNICEF) Ambassador for Polio Eradication, and being the first famous child to have been administered the polio vaccine as a baby, she has highlighted time and again the importance of polio vaccines, and tried to diffuse the taboo associated with it. Her surprise visits to schools in Lyari and her discussions with students about the grievances they faced also showed her concern for this sector. One will expect her to work on these issues if she gets elected in the Provincial Assembly in the 2018 General Elections.

During her recent campaign for her brother, a few pictures were released that showed her interacting with her supporters the same way her mother used to mingle with them, making them feel special. Benazir, like her father, knew that it is the PPP workers and supporters that make the party a powerful force. Asif Ali Zardari and his party leaders did not place the same importance on their supporters, and this has led to the party’s decline in recent years. Perhaps with Aseefa, PPP has a new ray of hope to reconnect with its voter base.

#KARACHI: Aseefa Bhutto Zardari addressing people in Larkana in connection with election campaign of Chairman #PPP Bilawal Bhutto Zardari in NA-200. She was warmly welcomed by the people of #Larkana. pic.twitter.com/yvTvqTOSpm

Discarding Aseefa for her parents’ sins is unfair. She is young, and might be able to bring exactly the kind of new perspective that Pakistani politics needs today. Aseefa deserves a greater share in the limelight, because she is a much more promising leader than her brother might be or her father has ever been.