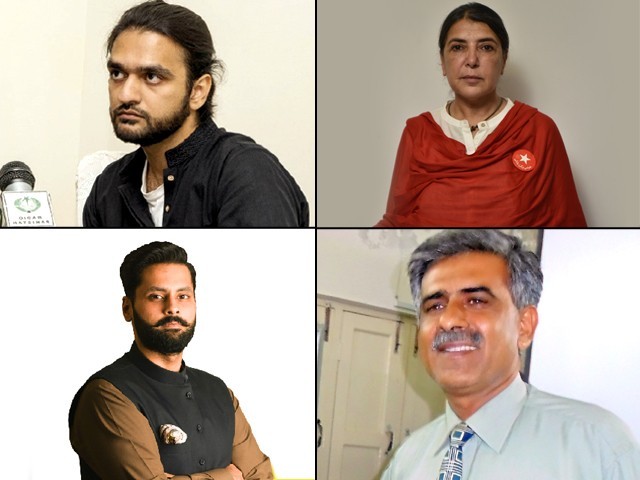 People like Ammar Rashid, Ismat Shahjahan, Jibran Nasir, and Liaquat Mirani have a platform to argue for issues that make sense for their communities.

With the General Elections only a couple of days away, politics is in its prime – rallies are being held, politicians are still being convicted and disqualified, and the ludicrous valuation of assets are making waves on national television and drawing rooms alike. Unlike 2013 though, excitement beckons with the launch of mainstream candidacies by fresh challengers, who are mounting pressure against the status quo. 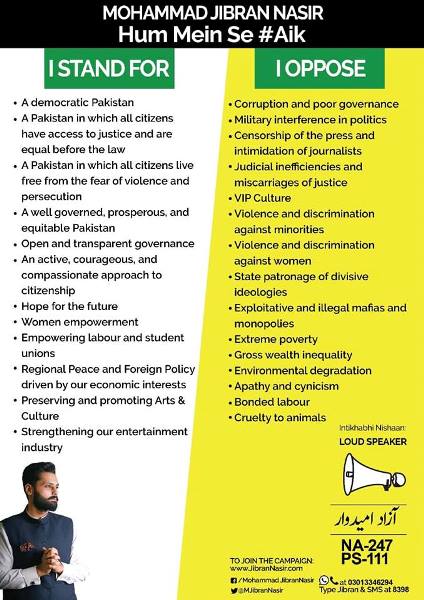 Prominent leaders of the leftist Awami Workers Party – Ismat Raza Shahjahan and Ammar Rashid – are prospectively taking on Asad Umar and Imran Khan, amongst other experienced personnel such as Mian Aslam in NA-54 and NA-53, Islamabad. 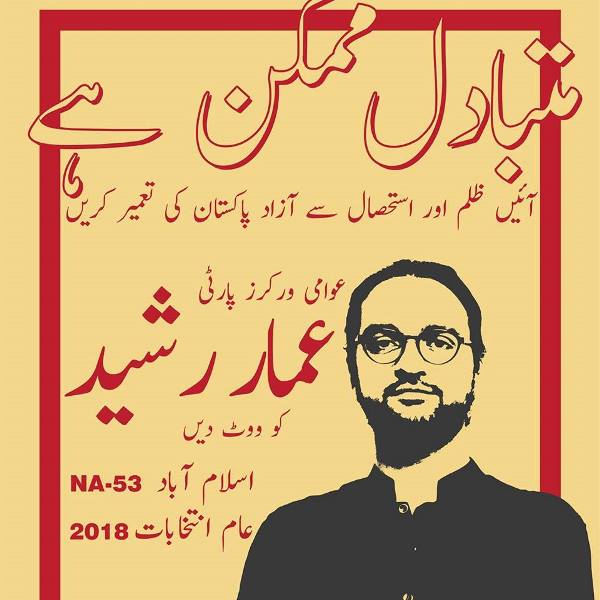 And, in a truly David versus Goliath fashion, a college principal named Liaquat Mirani is mounting a noteworthy candidacy against the Pakistan Peoples Party (PPP) and PTI for PS-13 in Larkana – the birthplace of Zulfiqar Ali Bhutto. 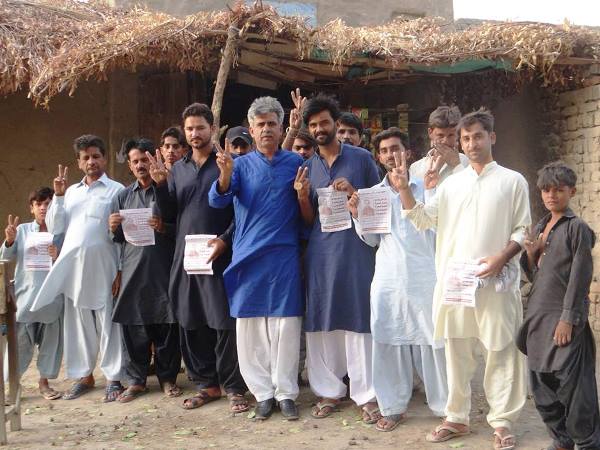 Pakistani politics is notorious for its barriers to entry; whether they derive from feudalism, wealth, caste, ethnicity, patronage, backing or connections. However, who are these progressives, how did they get here, and do their campaigns even matter?

What is progressive politics?

Progressive politics is a rising phenomenon, in which grassroots mobilisation and anti-status quo movements start to mount a challenge against complacent leaders. Think of Bernie Sanders starting a political movement for the reform of the Democratic Party in the US, urging for Democratic Socialism in an era where both the Republican and Democratic parties were mostly in the pocket of Wall Street corporations. Sanders amassed his campaign funding through grassroots donations and denied corporate funding, which he said had harmed America by allowing corporations to take over policy-making in Congress.

This is precisely what progressive politics is about: being anti-status quo, and more in touch with the public. Subsequently, rich oligarchs or feudal lords suddenly start making less sense. People slowly move towards candidates they identify more with, whose policies are more relevant for their everyday lives, rather than simply being blinded by charisma, wealth or influence. It is a true wave of unclichéd change through real people, who are closer to issues rather than personalities, be it feudal or celebrity.

How is progressive politics making its way into Pakistan?

Grassroots mobilisation is something that Nasir, Shahjahan, Rashid and Mirani have in common, despite their variety of geography – Karachi, Islamabad and Larkana.

Nasir talks about his lack of assets, implying that he is more in touch with the policy issues of Karachi than rich oligarchs. In a critical statement, he stated that most ministers get water tankers and thus cannot even fix the water crisis in their own homes, so how can they be expected to fix the issues of the public? Nasir has been running a strong social media campaign – asking for volunteers and donations from grassroots mobilisation vis-à-vis Facebook.

Shahjahan and Rashid are albeit less active on social media, but are utilising it to mainstream the Awami Workers Party and gather funding through what they call awaami chanda (crowdfund) in a manner similar to Nasir. They have also launched grassroots door to door campaign in Islamabad, ranging from the I-10 to the F-11.

AWP candidate Ismat Raza Shahjahan & Ammar Rashid visited I-10 katchi abadi unit of the Awami Workers Party Islamabad to meet party members and local residents. People from the abadi expressed solidarity with Ismat shahjahan as a candidate of AWP for NA-54 due to his long political engagement and work for katchi abadis. The residents expressed their full support for AWP for the election campaign and vowed to defeat the parties of the wealthy and powerful. #VoteAWP #VoteBulb #NA53 #NA54 #MutabadilMumkinhai

A post shared by Awami Workers Party Islamabad (@awamiworkerspartyislamabad) on Jun 22, 2018 at 8:45am PDT

However, most notably, Mirani has been carrying a loudspeaker in Larkana telling people that the rich VIPs in their expensive cars have done nothing for the community. He chants that he is their teacher on a donkey ride, and people should vote for him based on his community service track record.

The potential of social media as a political tool first showed potency during the Arab Spring. When Tunisia’s Mohamed Bouazizi set himself on fire in front of the governor’s office due to the state’s tyranny and brutality, his video and story were shared. When the Egyptian police carried out the coldblooded murder of Khaled Said, citizens on Facebook heard and launched ‘We are Khaled Said’! In the face of oppression by the state, common people united and played their part in removing some of the most powerful political regimes – equalising their strength with mobilisation.

The same equaliser exists in Pakistan; not for violence, but for peaceful democratisation through mobilisation and accountability. With internet penetration growing in Pakistan, no longer can politicians hide their scandalous corruption charges. More so, people like Nasir, Shahjahan, Rashid and Mirani have a platform to build a base, gather funding, and argue for issues that make sense for their communities – issues that may have been ignored by the current political status quo.

“I am amazed at (the) social media boom. The youth has now stood up against bad governance, corruption and nepotism.”

Looking away from home, recently in the US, a 28-year-old progressive named Alexandria Ocasio-Cortez defeated 10-time elect Joe Crowley in the New York Primary Election for the Democratic Party. Mr Crowley was a heavyweight fundraiser for the Democrats, who did not even bother to turn up for the election speech; such was his complacency in governing and his entitlement to govern. What happened next was an upset. Despite his $3 million campaign, Ocasio-Cortez defeated him with a $300,000 campaign funded through grassroots mobilisation.

The very same methodology is being used by Nasir, Rashid and Shahjahan.

Despite a thunderstorm & a shoestring budget, we had a beautiful, charged concluding gathering for our people's campaign yesterday. Ordinary people of all ages, genders, ethnicities & religions came & celebrated the emergence of a new progressive alternative. #VoteAWP pic.twitter.com/nhF2zhm1wb

Despite thunder storm, AWP front-line revolutionaries stayed till last minute to celebrate the emergence of a progressive force on electoral map of Pakistan. #VoteAWP https://t.co/8zVeD3cSRr

Will the Pakistani progressives achieve the same success?

The topic of their victory remains a pessimistic subject due to the seemingly insurmountable odds, given their opponents and the maturity of Pakistan’s democracy. But their heroics through grassroots mobilisation are strengthening Pakistan’s democracy – they are paving the way for a future without dynasty politics or feudalism; a future in which you and I can contest elections without any preconceived advantages. And for that, they deserve not only to be lauded, but also to be voted in power.